The Story of My Life -- In Family Pictures

Today I'm linking up with Kelly for Show Us Your Life: Family Pictures.

Once upon a time there was a little girl and her family didn't take a lot of family pictures. There were reasons for that, which the little girl understood, but they aren't important to this story. What IS important is that for about seven years after Grade 5 whenever that little girl went to her aunts and uncles' houses the same old family picture (with her in glasses and braces and corduroy overall knickers for goodness sakes!) was always on their fridge. So she determined that when she had a family of her own she would take lots of family pictures. 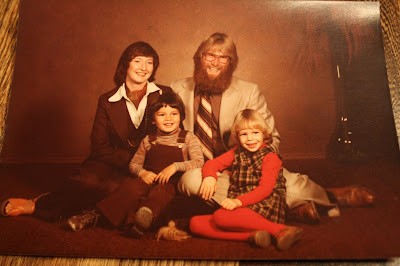 My family in the late 70s. I think this was a church directory photo taken by some professional photographer. I'm loving my dad's beard and tie, my mom's pantsuit and collar, and the shortness of my dress! Hahaha!!!

So the little girl eventually grew up, got married and got pregnant. And convinced her husband that they should take part in a cheesy professional photo shoot on their vacation in Jamaica. (Trust me, I picked the least cheesy picture I could!) 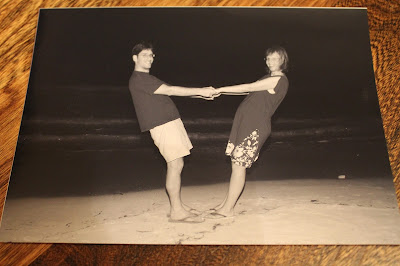 Then a little boy named Sam was born to them and the woman was soooooo excited to have professional family photos taken so she subjected her family to them when her son was three months of age... 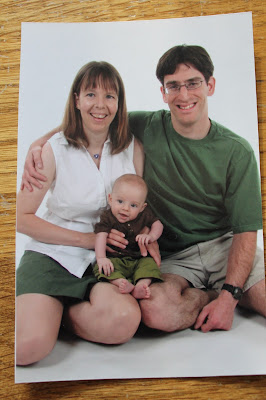 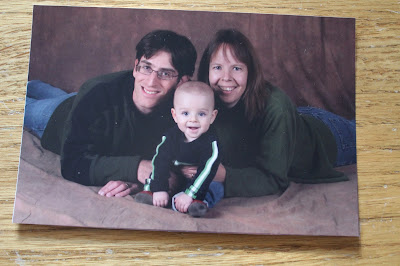 ...and one year old.
Notice how her husband was less and less excited as the year went on! 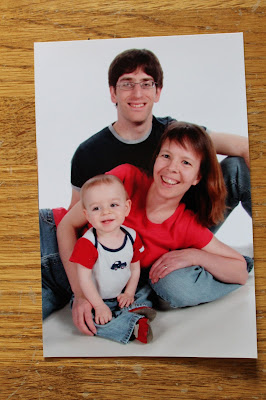 Then around the time of Sam's second birthday, the woman won a photo shoot and portraits on Facebook. Awesomeness!!! So she decided to use it to get some maternity pictures as well as some pictures of Sam at two. (My absolute favourite picture from this shoot is when the photographer asked if I would mind having some topless photos taken and then I joked, "Only if Dave gets topless as well." The photographer thought that was a great idea and then Sam, upon seeing both of us without shirts, insisted on being topless too! So we have a picture of me, Dave and Sam all tastefully topless and laughing hysterically! But I decided not to share that photo with the interwebs so you get this one instead!) 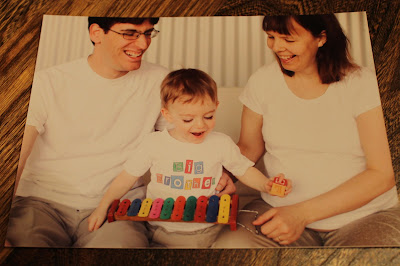 (photo by Heather Muse Photography. If you want to see more photos from our session on Heather's blog go here and scroll down to the last post.)
Finally the new baby arrived, she was named Rachel and the family pictures now had Rachel in them. Here's the family with Rachel at seven weeks old. 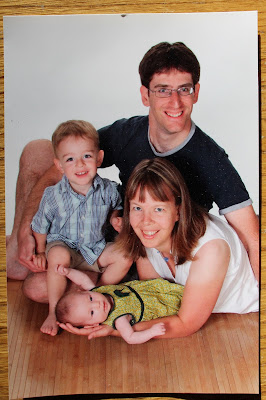 And here's the family this past summer, shortly after Sam turned three and very shortly before Rachel turned one. 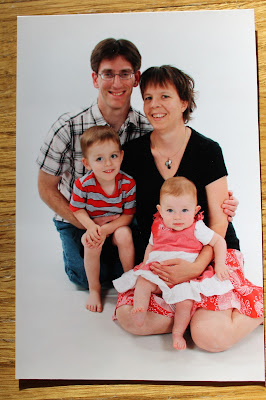 And here's an informal picture (taken by a friend) the family used on their holiday card this past December. And you can be sure that this family will continue having family pictures taken, both formally and informally, until about forever! 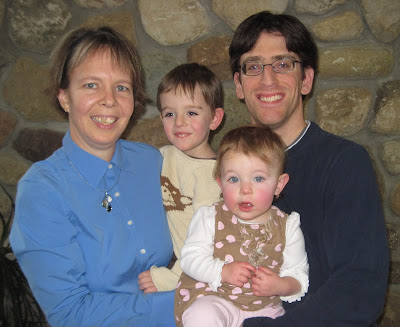 All pictures, unless otherwise credited, were taken at a grocery store chain here in Canada (Zehrs or Superstore, depending on where you live).
Also, as you can tell, I don't have these pictures as digital files on my computer, so I had to dig them all out of albums, take a picture of them and then post that. I'm sorry if the quality isn't great!
And if you haven't gotten enough of family pictures you can go here to see a post I did on the outtakes from our holiday card in 2011.
And now I'm going to go get some new family picture ideas by visiting the other blogs in this carnival. My family will be thrilled :)
Posted by Natasha at 23:14

Labels: Blogging, Show Us Your Life