Getting stuff done in Ontario!

In the middle of April we flew to Ontario for an extended long weekend. We went for two reasons: 1) it was Passover and we wanted to celebrate with Dave's family and 2) we wanted to get some wedding errands done. We managed to accomplish both of these with much success.

On Thursday Natasha walked to school with Tessa and Janice while Dave stayed home to bid farewell to Willem and Tim. Natasha then spent the morning with Janice getting some advice on how to wear her hair for the wedding and then they went for lunch. 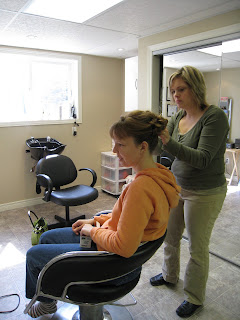 Dave meanwhile had a meeting with a research colleague, and followed that up by meeting a friend from his Master's degree at U of W for lunch. After lunch we met up again and headed to uptown Waterloo to do some wedding errands. First on the list, the marriage license. 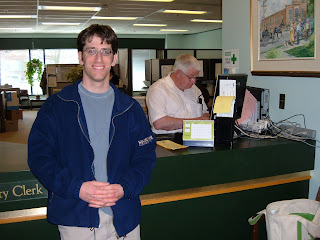 After a busy afternoon of various other wedding errands we met up with Dave's mom and niece to do some wedding shoe shopping. Then we spent the evening with friends, Dan and Lisa. Friday morning we met with our caterers and saw the place where we will be having our reception. We had lunch with Natasha's aunt Lorna and then she helped us choose some flowers for our wedding. 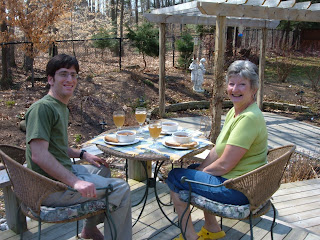 After some more wedding errands in the afternoon we played with Willem and Tessa and had supper with Tim and Janice and family. 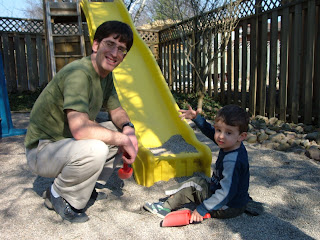 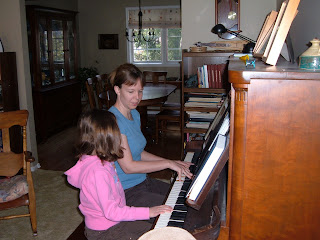 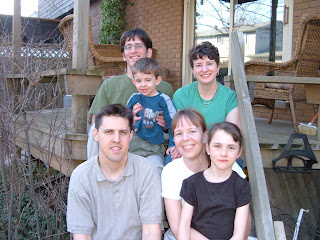 On Saturday, Wes, Shirley, Elhana and Aaron had us over for brunch. 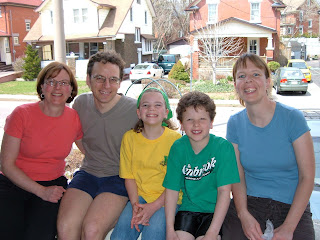 After brunch it was off to New Hamburg for the first Seder. It was good to see friends of the family who came for the event, as well as Dave's family, of course. 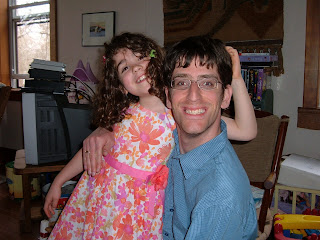 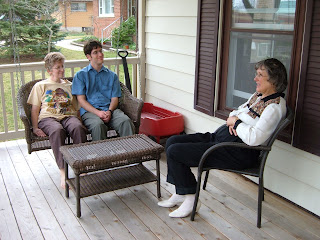 The next morning, we visited the Snyder-Penner family for breakfast, and then carpooled to Waterloo North for an Earth Day-themed service. 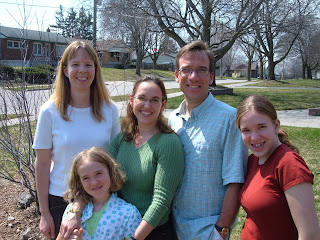 Afterwards, we enjoyed lunch with the Andres family, and then returned to New Hamburg for the second Seder. 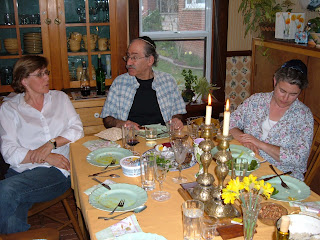 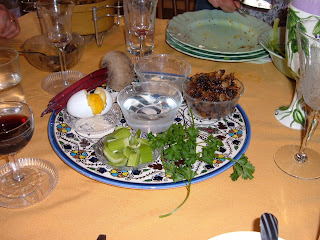 The seder plate, with symbols of Passover
We then stayed with Dave's family for the rest of Sunday and Monday, getting a chance for a slightly longer visit. 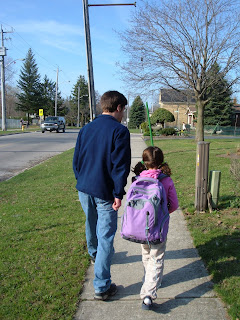 Dave and Lily walking to school 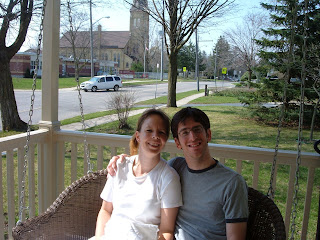 Us relaxing on the front porch at Dave's parents' house
Posted by Natasha at 16:46 No comments:

A long, long time ago (okay, so it was only a few months ago) Dave was asked to help the U of A host the International Collegiate Programming Competition (ICPC) in Banff during the first week of April. At the time, Dave weighed the pros -- free trip to Banff, classy accomodations -- and cons -- which were drowned out by the "free trip to Banff" -- and happily agreed to volunteer.

Fast forward to the beginning of April, and things are looking a bit less rosy. Dave has assignments due, project presentations to prepare, papers to write, and then there's this ICPC thing thrown in the middle. With a somewhat less enthusiastic outlook, Dave set out for Banff along with a couple of friends on Friday evening, and hoped for the best.

The week, much to Dave's surprise, ended up being a rousing success. He helped with everything from stringing fibre optic cable and setting up a hundred computer stations to acting as a security guard during the competition and creating PowerPoint presentations of each day's events. Dave also got a chance to wander around Banff a bit, take lots of pictures of mountains, and spend some time in the hotel's hot tub and heated outdoor pool. It was also a good chance to get to know some of the 30 other U of A volunteers, who ranged from first-year engineers to doctoral PhD students. Finally, the fact that it was an international competition meant that Dave was rubbing shoulders with 300 students from Argentina to Australia, and from Cairo to Cambridge. The biggest surprise came at the end-of-competition celebration, which featured jugglers and a hypnotist. Dave had (foolishly?) agreed to help with the event, which was kept secret from *everyone* -- including the volunteers -- right up to the last minute. Thus, Dave did not realize that he'd be on stage in front of 400 people, acting as one of the hypnotist's stage hands. It was certainly an interesting experience, although not one Dave would care to repeat anytime soon!

This all sounds like lots of fun, you might say, but what about all that schoolwork? The assignments? The papers? Well, in the midst of all that (mainly thanks to some slow hours spent staffing the volunteer office), Dave managed to write a report, create a presentation, summarize survey responses for his TA job, and finish his last course assignment ever! All in all, it was a very good trip, and Dave was very happy that he took the opportunity to go.

What about Natasha, you might ask? What was she doing this whole time? She was working, shoveling copious amounts of snow, and waiting impatiently for Dave to get home.

Here are a few pictures that Dave took while he was there, to give you a sense of the place. 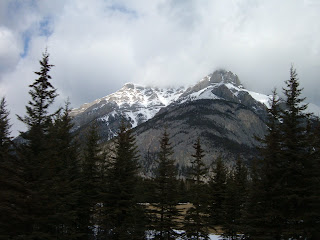 As someone from Ontario, Dave was very excited about seeing mountains everywhere 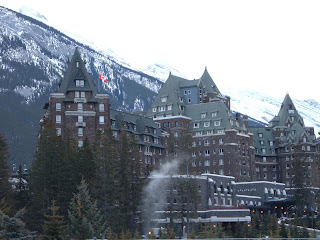 The ICPC was held at the Fairmont, which is a 100-year-old CPR hotel 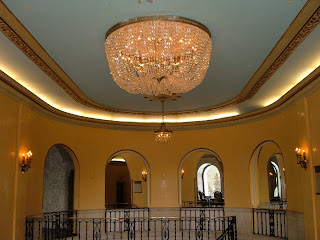 This means that even the hallways are *very* classy... 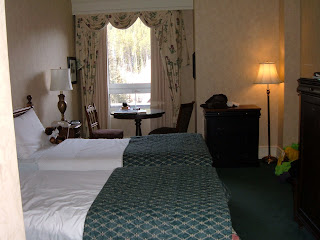 ... but the rooms are a bit small (I was sharing this one with a friend) 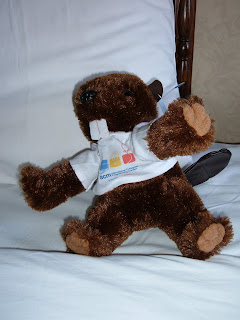 The conference was run by IBM, who gave us random free stuff, including this stuffed beaver.

Ever since we moved to Edmonton, we've kept one wall free for a piano. After a few months of intermittently checking local classified ads, we finally found a piano that was the right price (cheap :) and in working condition. The person we bought the piano from was very nice, and she even knocked a bit off the price, which was a nice bonus. After a few days of waiting, the piano movers were able to get the piano from her house to ours, and we have since been happily noodling away. 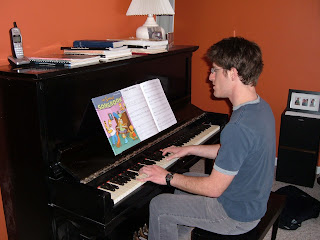 Dave playing something from "Rent" 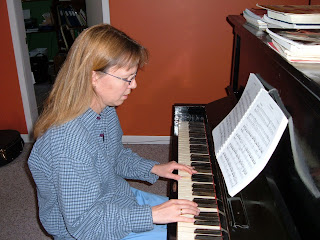 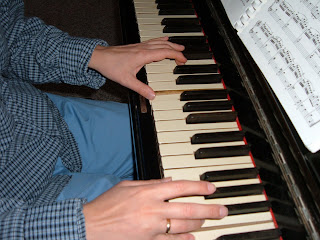 We have not yet, unfortunately, gotten someone to tune the piano, so this has put a bit of a damper on our playing the piano, but we're looking forward to many hours of tuneful music. Eventually.