Our time in Ennistymon

After a day in Dublin we headed off to the west coast of Ireland, to a very little town called Ennistymon. When we booked our bed and breakfast on the website it sounded like it was about "5 minutes away" from a number of different places. That sounded good to us! However, when we got to our bed and breakfast we realized that it was "5 minutes away by car" from everything. Since we hadn't rented a car we had to make some different plans. However by combining walking into Lahinch (the next nearest town (about a 3km walk from our B&B)) and catching buses from there, and with the help of our amazing hostess who found rides for us to other places, we actually managed to see a fairly good chunk of the area we were in. 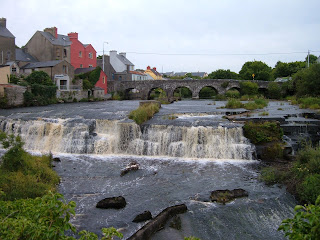 Ennistymon had a gorgeous river dividing it. If you walked over the bridge, heading to the right out of the picture, and continued up the hill about five minutes, you got to our B&B. It was a lovely spot to stay. 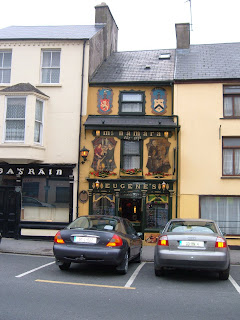 This is one of the pubs in Ennistymon where we
drank some Guiness and listened to music. One of the fixtures of our B&B was Shadow, the dog. Shadow was hilarious. He would hang out outside our window, waiting for us to come and play. His favourite game was "Fetch" but he was hysterically bad at it. As you can tell from this picture, he would bring you the stick and as you reached for it, he would turn his head away! 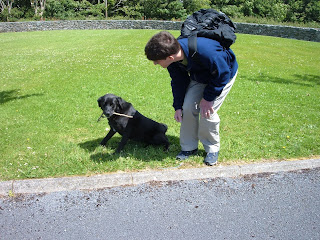 Dave attempting to reason with Shadow.
Sadly, it didn't work. 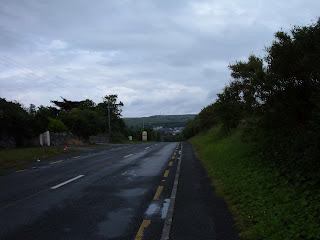 This is the road we walked along to get into Lahinch. Since it was a major road in the area, it wasn't actually that pleasant a walk. Although the scenery was beautiful.

Lahinch was bigger than Ennistymon. It had more choices for eating and a beach -- when the tide was low enough. The one sunny day we experienced, we went to the beach. It was only about 15C out but for the Irish, this must be the hottest summer day, since the water (which was freezing) was packed with people swimming. We ventured in with our toes but didn't wish to go any further. We did enjoy tossing a frisbee around though. Although it was quite windy which made the accuracy of our throws... challenging... to say the least! 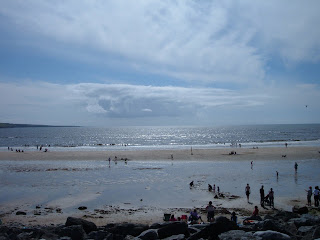 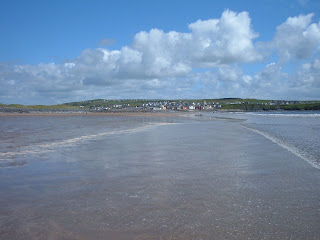 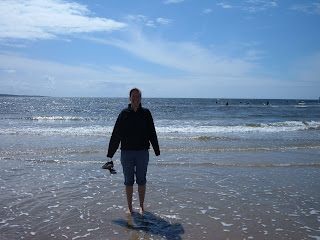 Another day we took the bus to the Cliffs of Moher. They were gorgeous, although filled with tourists. We would have enjoyed it a lot more if there had been less people and more places to walk. However we did manage to get a picture of the two of us, without other people in it. The day we were at the Cliffs was incredibly windy so although we had planned on staying longer, we ended up not doing so; it was too cold. 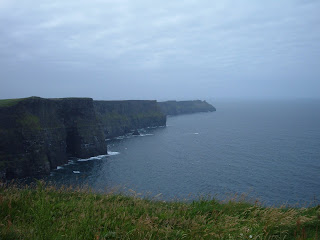 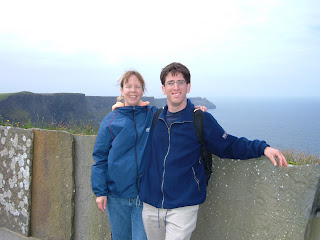 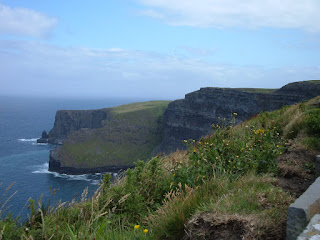 After about five days in Ennistymon we headed back to Dublin for a night and then flew home, via New York City, where we stopped to visit Dave's grandpa for an afternoon.
Posted by Natasha at 19:20 No comments:

After a couple of flights, a nap, supper at a pub and a good night's sleep we were ready to see what Edinburgh had to offer. And it had a lot!

We started out with a hearty Scottish breakfast of tea, fried mushrooms and tomatoes, toast, croissants, beans, eggs and bacon and yogurt. And no! we didn't both eat all of that. 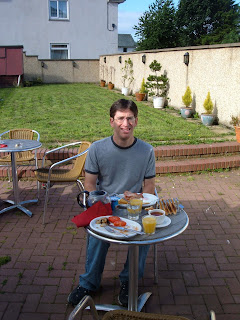 Then it was off to catch a bus downtown. We jumped on the Edinburgh sightseeing tour and found out interesting facts like the fact that JK Rowling wrote Harry Potter here (although exactly where she wrote it is a little disputed -- either an internet cafe or a Chinese restaurant!), that Adam Smith (the economist) is buried here, as is John Napier (inventor of logarithms and decimal fractions).

We also found out that the Scott Monument is the tallest monument to a writer and that the view to the south from Princes Street is so revered that there is a national law against building anything to obstruct it. And we caught a quick glimpse of The Queen, Elizabeth II, as she spoke on the steps of a church. That's right: The Queen was in town.

After the enlightening bus tour we walked up The Royal Mile. We noticed that a crowd was still in front of the church where The Queen had been earlier and we waited a while and saw her get into a car. Madly waving with one hand, we got this picture with the other. 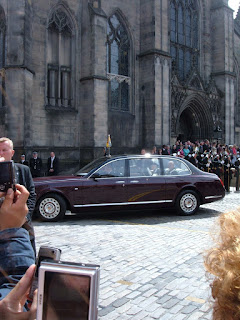 We stopped in many souvenir shops as Natasha attempted to find a real, but inexpensive, kilt. We had a lunch of sandwiches and Coke at Lady Stairs Close and then stopped in at the Camera Obscura/Illusion Museum. The most interesting parts of this museum were the different optical illusions, the different views of Edinburgh and taking cool pictures in the light tunnel!

Then we stopped at "Thistle Do Nicely" -- Dave's favourite shop -- to buy some mini bagpipes for Dave. Natasha will have hours of entertainment and torture as Dave attempts to learn to play them. (According to him, the best sound he got out of them today was a dying cow!). 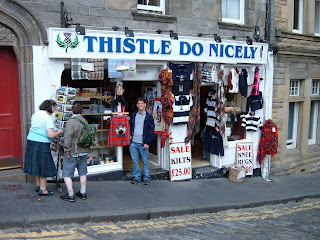 After that we took advantage of The Scotch Whiskey Experience to taste a dram of whiskey, collect some whiskey glasses, and find out more about how whiskey is made. It was interesting to find out about the whole process from the fermenting of the grain to the aging of it in barrels.

We also stopped at a shop where we could watch people spin cloth for the many kilts which Edinburgh sells. Natasha eventually bought a blackwatch plaid kilt, which she looks forward to wearing in cooler weather, and then we headed off to climb Arthur's Seat. This highland landscape, located in the middle of Edinburgh would have been an easy climb except for the fact that we both have colds, we were carrying lots of stuff and Natasha was only wearing flip flops. Given all this, it was a little more difficult then we expected but stubbornness prevailed and
we were soon at the top. 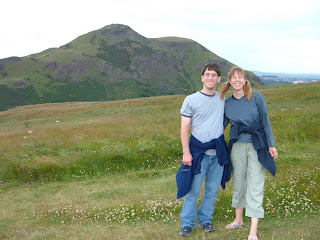 The trip down was a little easier as we didn't attempt to go straight up the side of the cliff.

Supper was at Ensign Ewart, a pub we'd found earlier in the day which may have connections to Natasha's mom's side of the family. Dave ate some haggis and Natasha had the more mundane roasted vegetable lasagna. 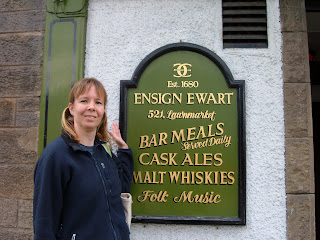 The next morning we went up the Scott Monument but unfortunately the camera batteries died so we only have a few pictures. 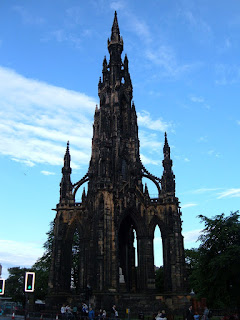 The Scott Monument, which we climbed to the top. 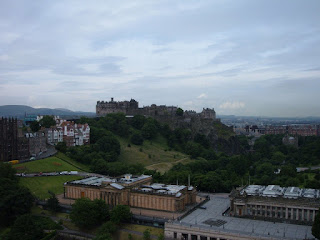 The Castle in the background and The National Gallery of Scotland in the foreground. 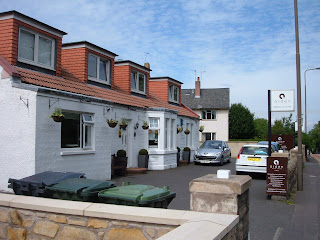 The guesthouse where we stayed in Edinburgh.