From December 20 - 26 we were in Saskatoon to celebrate Christmas with Natasha's parents. We also did some work on the house but that's a separate post! Despite the fact that they were still in the house trailer (not the first trailer and not the fifth wheel but a trailer designed (mostly) to be winterized!), Natasha's parents managed to make it quite Christmas-like indeed. 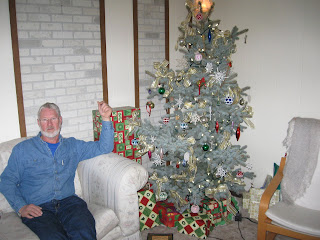 To get a Christmas tree, Natasha's dad went to a pile of trees the nursery had bulldozed and sawed the top off of one of them. It was a lovely blue spruce.
Natasha's niece,Kaelin, and her mom were visiting relatives in Saskatoon and we got to spend one day with Kaelin. Since it wasn't Christmas Day she got to open her presents early. It was great to see Kaelin again and she has grown up A LOT! Natasha's nephew, Liam, came over to play that day too. And Ainsley, Jason and Erin came over later that evening. 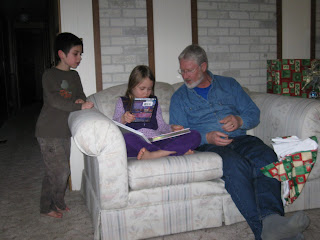 Kaelin checking out her presents from Oma and Opa. 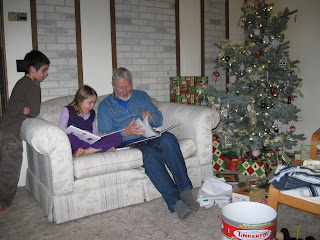 Natasha's dad points out the stickers in one of the books.
It is tradition at Opa and Oma's that when Kaelin and Liam are there at Christmastime than Oma makes peppernuts with them. For those of you who don't know, peppernuts are a German Christmas cookie and they are each very small so you can eat about a million of them. 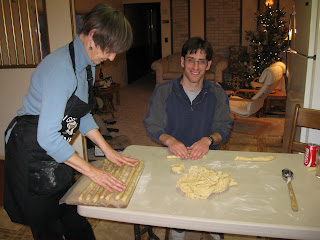 Once the dough is made it needs to be rolled into long strips.
Dave tried his hand at it and realized it wasn't as easy as it looked. 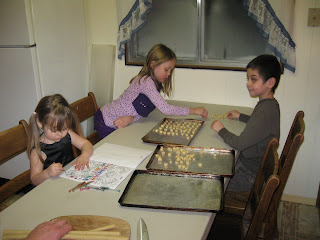 Once the strips are frozen they get cut into little circles. Then Kaelin and Liam put the cookies on the pans to bake. Auntie Natasha "helped" by eating some of them before they could make it onto the sheets! Ainsley industriously coloured the entire time.

Sheri was visiting from Newfoundland for a few days while we were there and one evening things got silly. Below are some pictures, as proof (for those of you who needed it!). 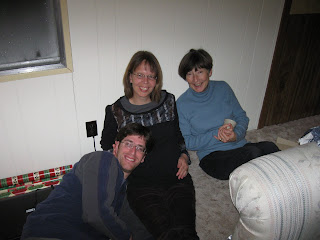 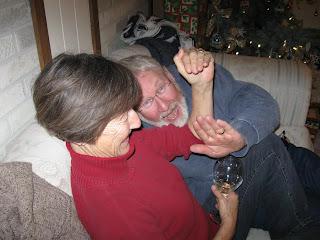 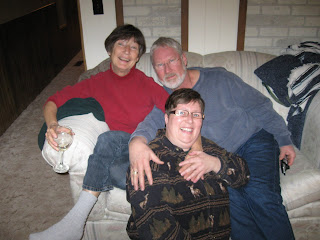 But there were relaxing times as well when we just sat around and read. Or Natasha's mom checked out the wedding albums that we made. As a thank you to our parents and Natasha's Auntie Lorna, who let us get our wedding pictures taken in her backyard, we made them each an album of wedding photos. We think they liked them :) 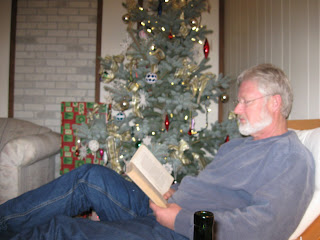 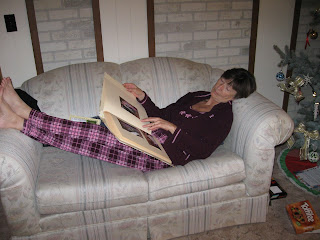 On Christmas morning we opened presents. Dave was curious to see what was in the big one for him! (Natasha already knew, even though it was from her parents.) 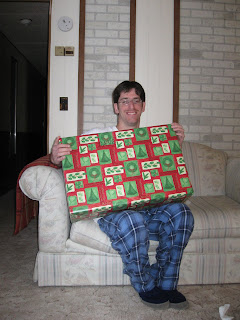 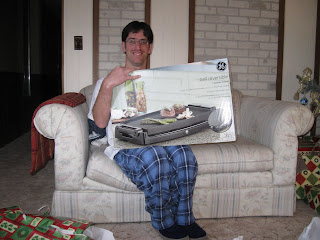 Dave was very excited about his new grill and is willing to make pancakes for anyone who wants to drop by for some :) Unfortunately Erin got the stomach flu on Christmas Eve night and wasn't able to join us on Christmas Day. Jason, Liam and Ainsley however came over to open gifts and eat Christmas dinner with us. Later that night Dave and Natasha's dad cleaned up the kitchen. 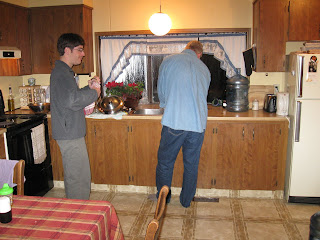 Early on December 26 we flew to Ontario, but once again, that's for a different post!
Posted by Natasha at 13:23 1 comment: