At the end of February Donny and Marika came to Edmonton and we finished all the invitations for both of our weddings. The weekend blitz is best described in pictures: 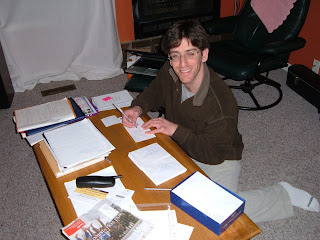 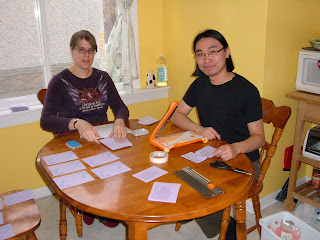 Starting the first stamping of Donny and Marika's invitations 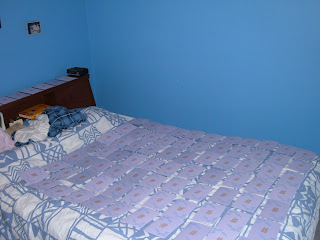 The second stamping drying on our bed 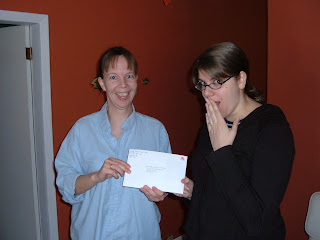 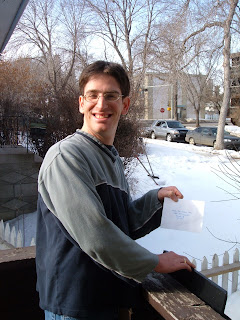 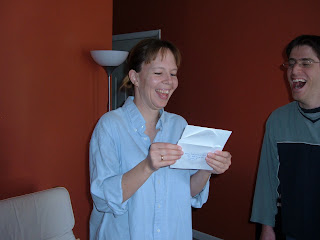 Laughing at Marika and Donny's response! 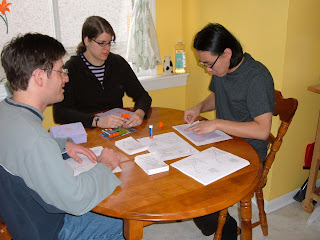 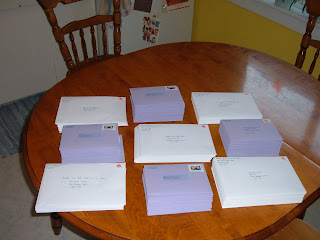 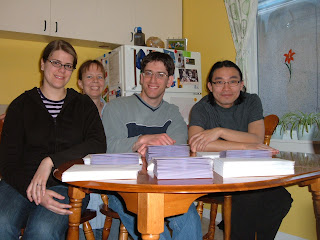 The workers and the finished piles 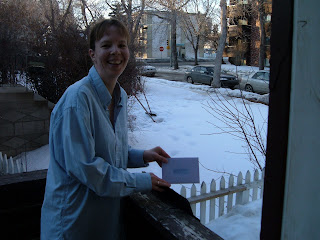 "Getting" an invitation to Donny and Marika's wedding 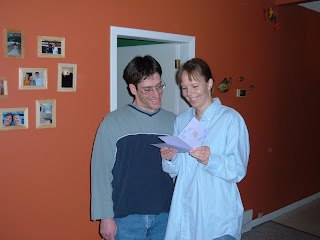 So happy to be invited! 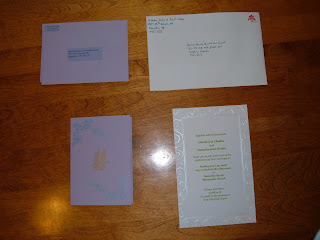 All together now
Posted by Natasha at 16:28 No comments:

This may be the first time since Europe where we write a blog post about something which happened on the day we are writing it! But today was so eventful we had to blog about it immediately.

We are at Natasha's parents in Saskatchewan for the Family Day Weekend and helping them get a head start on their major home renovation. Today we focused on the basement. First of all we had to move some stuff out of the basement to the quonset (a huge shed behind their house.) We carted two truckloads of stuff out there. 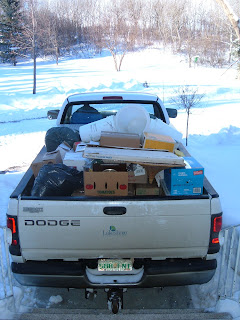 The first truckload is ready to go.
Then we had to get rid of a wall. That was fun with an opportunity to swing a REALLY BIG sledgehammer!!! 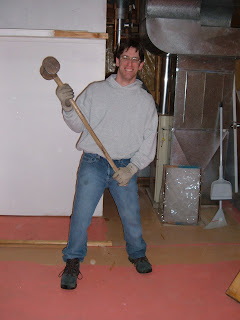 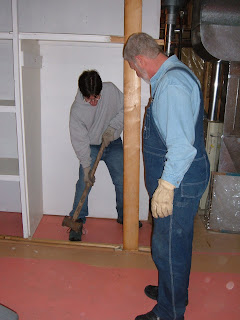 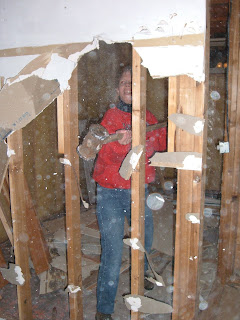 Natasha demonstrates the proper technique of "bashing through gyproc"! 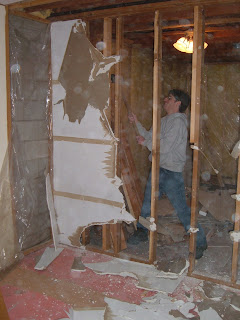 Dave: 1 Wall: 0
Once we had knocked down the wall we had to haul the wood which wasn't being saved out to the yard and burn it. Since it was a few degrees above zero we also indulged in a wiener roast. First though we had to build a REALLY BIG fire! 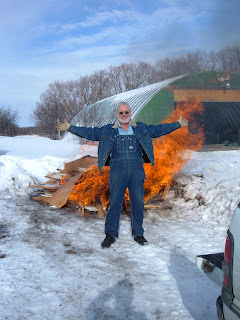 Once it had burned down a little we could roast wieners using wiener sticks and ... pitchforks. 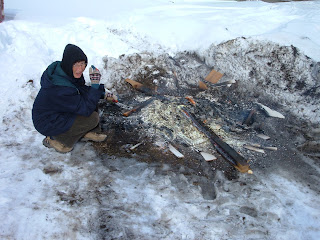 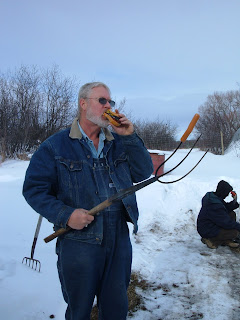 Natasha's dad demonstrates the pitchfork technique.
After the morning's hard work, it was an excellent lunch. 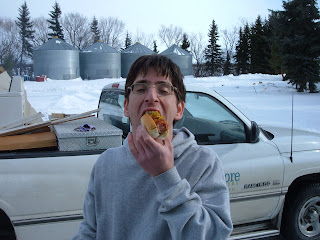 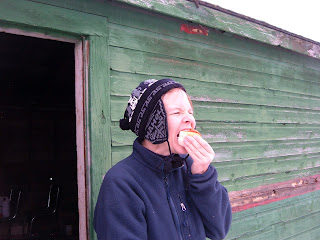 So for those of you who are wondering what we've been doing with our weekends the answer is this: playing a lot of San Juan, entertaining people, and figuring out our wedding invitations.

In January we headed south, all the way to Calgary, to visit Donny and Marika in their new digs. When we left Ontario in August, friends of Natasha's gave us a game, San Juan. We brought this game to Calgary, hoping we could entice Donny and Marika to learn it with us. But first of all we had some shopping to do.

We have declared Marika our official wedding shopper. She's the one who found the dress Natasha will be wearing on June 29. We found a great suit possibility for Dave with Marika's advice and input. And Natasha bought shoes! Marika didn't find them, per se, but she did walk by them first!

After supper on Saturday night we pulled out San Juan and played for the first time. Three (or four?) games later we finally decided to call it a night and headed to bed.

Sunday we met up with Kirk and Robyn and after a delicious lunch at The Cheesecake Factory, we headed back to Donny and Marika's and played another game (or two?) of San Juan. It was an excellent weekend visiting with good friends, with good shopping and a fun new game. San Juan, in Calgary, with Dave, Donny, Marika and Natasha's reflection in the mirror.

At the beginning of February, Natasha's parents came back from Mexico. We welcomed them to a cold Canadian winter and they brought us back a beautiful (and colourful!) Mexican tablecloth. We did some shopping with them and bought the beginnings of our wedding invitations. We also spent some time with Natasha's cousins and their two kids. 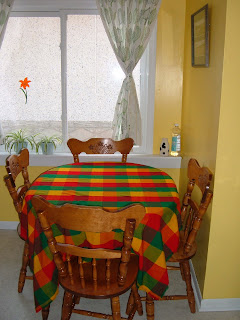 Our colourful Mexican tablecloth works really well and in our yellow and green kitchen.

Then Marika came to Edmonton for a visit. True to Marika shopping style we had some good luck with more wedding shopping -- this time a few extras for the invitations and shoes for Dave! We spent some of the weekend addressing invitations and managed to fit in a game (or ten!) of San Juan. You really have to play this game -- it's addictive and short, once you know what you're doing. We've managed to play most rounds in about 30-45 minutes. We're not going to tell you the specifics here; Google it and check it out for yourselves. 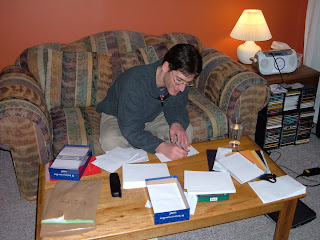 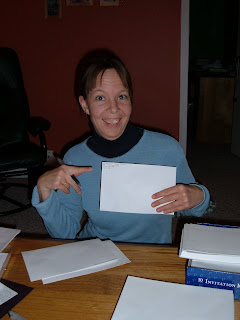 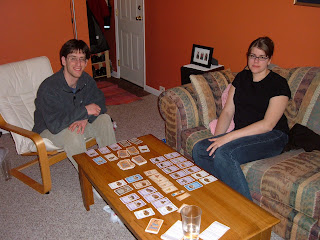 Dave and Marika after a marathon San Juan weekend in Edmonton.
Posted by Natasha at 23:42 No comments: