Now that Natasha has told you about her employment situation, I figured I should fill you in on what I've been up to here in Edmonton (no, the answer is not "nothing" -- that would make for a very short and boring post :).

My main projects over the past few weeks have been a couple of websites that I've been asked to re-design. One is for Project Teach, a program run by a friend of the family (Pierre Joanis) which helps train schoolteachers in Haiti. The old version of the site is up at http://www.project-teach-haiti.org, and my "new and improved" version should be going up within the next few days.

The other site is for Wave Control, the company that Natasha is working for. Natasha was discussing her possible duties with Trevor (her boss) when the topic of improving the company's website came up. She recommended me for that part of the job, and so I've been working with Trevor to spiff up the existing site. This site is located at http://www.wavecontrol.ca, but it is -- once again -- the old version, and I'm not sure exactly when we're going to switch over to the new version.

The other bit of employment I've had this past week was helping Trevor clean out his old condo, which he officially moved out of at the end of August. This involved moving furniture, boxes, etc., and then cleaning the place from top to bottom -- floors, fridge, stove, bathroom, etc. It took a bit longer than I'd hoped, but it was satisfying to be able to leave the place knowing I'd done a thorough job, and that it would be clean for the people moving in.

Besides the website design stuff, I've been doing house organization things like hanging pictures, organizing books, and other general tasks like cooking, and grocery shopping. The school term starts tomorrow (aaah!) with a day of grad orientation events, so I will be turning my attention towards my degree quite soon.
Posted by Dave at 23:18 No comments:

Well now that you know all about the moving aspect of life I thought I'd tell you all what exactly it is that I'm doing here. I have two part-time jobs, both of which were lined up before I got here. It's true that there's a shortage of employees in Alberta, which worked out well for me :)

My first job is an office manager-administrative assistant-bookkeeping position. I will work twenty hours a week, in the mornings. The company is called WAVE CONTROL systems ltd (www.wavecontrol.ca) and they produce a very specific part for the oil industry -- it has to do with chemical fluid control. I really don't understand more than that. I am doing all of the bookkeeping, various administrative tasks, and eventually I will also be a part of the quality control and testing phase of things. I might even get to assemble some fusion boxes, whatever they are! This past week I worked full-time at WAVE CONTROL since the research group wasn't ready to have me start yet.

That's my other job -- I am a research assistant for a kidney research group at the University of Alberta. I will be working there in the afternoons. My good friend, Natasha Wiebe, is a statistician for the group and she is the one who has brought me on board. I am looking forward to starting there next week and will be able to fill you all in on more details of that job at a later point.

One of the things I really like about both my jobs is that they are located within walking distance of our place. The walk to WAVE CONTROL is 3.3 km from our house and takes me a little over half an hour. I don't know what it will be like in winter but I am looking forward to the challenge! The walk to the university is also about half an hour. Unfortunately they are located on opposite sides of our house so to get from one to the other I will have to take the bus. Oh well, nothing's perfect.
Posted by Natasha at 01:27 No comments:

After a week in Saskatoon, we headed out on the final leg of our journey, arriving in Edmonton early on Thursday afternoon (August 16). First of all though, we had to continue our tour of big things by seeing the Egg at Vegreville. 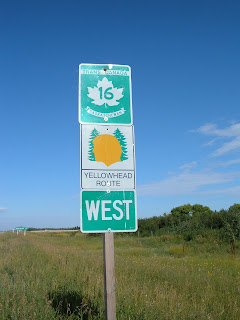 The Yellowhead in Saskatchewan 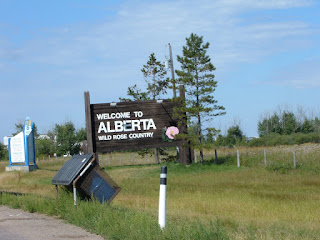 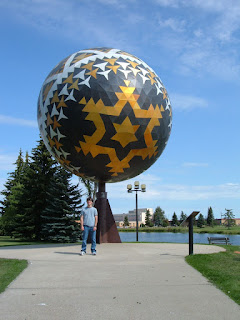 Yep, it's really a giant egg!


We got a tour of our new home from Deanna, our landlord, and went out to buy paint. Natasha's parents arrived that evening, and we spent the next three days transforming our place from a beige box into a colourful, bright home, complete with furniture -- brought from Saskatoon by Natasha's mom and dad -- and our boxes of stuff, which arrived safely from Waterloo. We are so thankful that Natasha's parents not only gave us lots of furniture that they weren't able to use, but also fixed walls, painted with us, and helped us move in for three days, in the midst of their move. Thanks.

Since words cannot describe the transformation our place underwent during those three days, we are including some pictures. 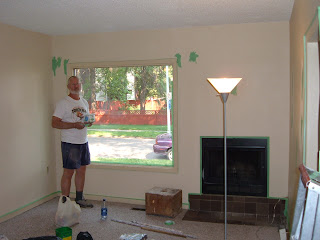 Natasha's dad fixing the numerous holes in the walls. 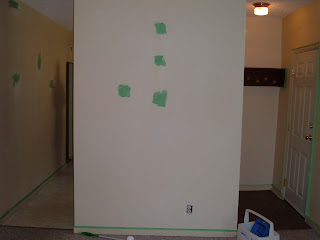 Our (only) door is on the right and the hall to our kitchen is on the left. Just a sample of the beige-ness of our house. 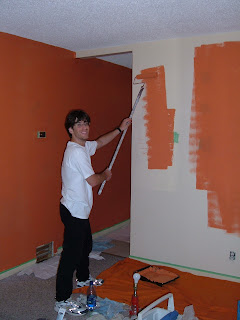 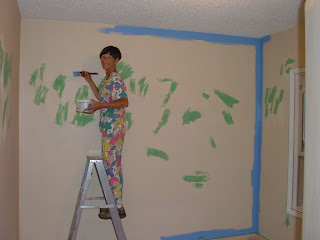 Our bedroom is getting blue-er! 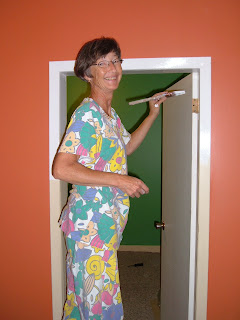 Natasha's mom painted a first coat on all of our trim before she left. 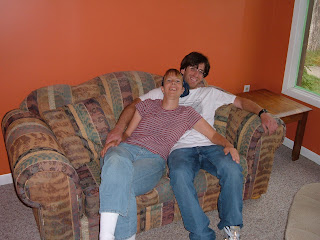 After all the furniture was moved in,
we were more than ready to relax... 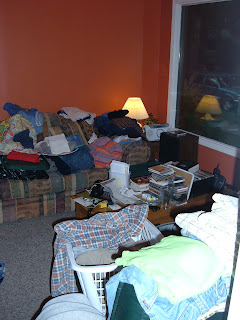 Our week in Saskatchewan was mostly spent helping Natasha's mom and dad move. For those who don't know, Natasha's mom and dad recently sold the place where Natasha grew up. Located about two kilometres outside of Saskatoon when they first settled there, in 1970, there is now a sub-division planned for the land upon which the family home sits. Thus the move to a location about 10 kilometres outside of the city. During the week, we helped pack, move, unload and unpack about four trailer loads of stuff. And countless car trips too!

Natasha had the opportunity to stroll down memory lane, dragging Dave with her, as she sorted through various books, toys, photo albums and clothes from her earlier years. Thus we moved an extra five boxes with us to Edmonton. Natasha was especially glad to re-discover her Cabbage Patch doll, named Julie Melinda.

Natasha was glad to be a part of the transition from the old house to the new farm. And her mom and dad have lots of plans for renovations for next summer so this probably won't be the last week of helping her mom and dad in Saskatchewan.

Other than moving we also spent part of one day driving to Rosthern, where Natasha showed Dave the school in which she spent her Grade 12 year. She even got to show him the room she lived in, in the Girl's Dorm. And the all-important brick on the old schoolhouse where she had carved her name. (This is a Rosthern Junior College tradition and Natasha's brick is on the same wall as her Grandpa Ewert's, and those of both her parents. Her dad, for some reason, even managed to scam *two* bricks!) After the school tour, we enjoyed a Mennonite brunch at a heritage farm which was quite tasty.

We also spent some time with Natasha's brother, Jason, and his family -- partner Erin and kids Liam and Ainsley. Liam won for quote of the day, when after ordering our food at a restaurant he announced, "Now we're in hibernation." "What does that mean, Liam?" someone asked. "It's when we sit and wait for the food to come!"

Since our time in Saskatoon was so focused on moving Natasha's mom and dad, we have no pictures at all from this week. Maybe next time...
Posted by Natasha at 00:53 No comments: