After we got back from DisneyWorld we only had a week in Edmonton before we headed out for yet another stretch of travel, this time by car to Saskatchewan, and then by plane to Ontario. During the week in Edmonton Natasha was quite sick with a very bad cold, with the end result being that she didn't work much in December.

We drove to Saskatoon and the next day Natasha's mom cooked a big turkey dinner. We enjoyed amazing food and it was fun to see Liam, Ainsley, Jason and Erin again. Ainsley was talking so much more than she had been at Thanksgiving. And Liam enjoyed that Dave played Spiderman and other bad guys with him.
Sunday morning we had a surprise lunch of dim sung with Sheri from Newfoundland, a friend of Natasha's parents. Dave was glad to get to meet her before the wedding. Sunday afternoon was the Krahn family Christmas celebration. Dave got to meet a few more cousins and we both got to fill in aunts and uncles on more details of the wedding.
Monday was Christmas Eve. We went to Natasha's aunt and uncle's to pick up Natasha's Grandma Ewert, who spent a few days with Natasha's parents. Then it was time to start making Christmas Eve appetizers! Jason, Erin, Liam and Ainsley came over again and we had an excellent dinner of meats, cheeses, crackers, spanokopita, stuffed mushrooms and other treats. Then we opened presents. And Dave got his first ever Christmas stocking with the obligatory orange and chocolates! Dave finished off the evening by playing Scrabble with Natasha's grandma until almost midnight.
Christmas Day, after a really good brunch with wine and individual omelets, we flew to Toronto. On the plane Dave finally got to see The Simpsons Movie! Dave's parents picked us up and the Ontario portion of our vacation started.
We saw over fifty individual people while we were in Ontario and everyone was very understanding about the short visits we had to fit in. Not to mention that we were running late EVERYWHERE we went :) Some highlights of the trip (in no particular order) were:
-- be able to drive out to New Hamburg to see Dave's family for short, random visits
-- eating Lindt balls and playing Guitar Hero with Dan and Lisa
-- Natasha got a wedding dress
-- a really good post-Christmas dinner with Natasha's family in KW at Auntie Lorna's house
-- getting to see where our reception is going to be
-- listening to Willem's singing and Tessa's piano playing
-- seeing Natasha's niece in Toronto
-- going to Waterloo North on Sunday morning
-- the fun game of Apples to Apples on New Year's Eve
-- watching random YouTube videos with Jon and Kristen, Jen and Mike, Dora-Marie, and other people
-- a wonderful Shabbat dinner with Dave's family
-- getting to see Natasha's cousin Robyn who was home from Japan for a few weeks
-- the awesome game of Cranium
We flew back to Saskatoon on New Year's Day and the next day Natasha's parents drove back with us as they were flying to Mexico the next day from Edmonton. It was so good to see everyone in Ontario again and sorry to the people we missed. Maybe next time...?
Posted by Dave at 22:11 No comments:

After our whirlwind month of action-packed weekends, we started December off with a trip to see Dave's relatives in New York for Chanukah, followed immediately by a trip to Disney World with Dave's immediate family. We flew into New York City on Friday night, and stayed over at his aunt and uncle's near the city. We then headed to Walden (a small town where Dave's grandparents live) to meet up with the rest of Dave's extended family on Saturday, and had a Chanukah party that evening with various relatives. 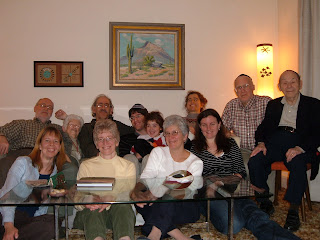 Sunday morning was mainly spent packing and getting ready to head off to Florida, but we managed to fit in a bit of time for Natasha to try on Dave's grandmother's wedding dress. 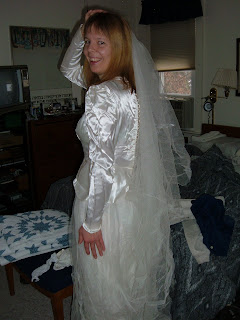 Natasha got changed back into a more travel-friendly outfit, and we all headed off to catch our flight to Orlando. After spending the evening getting settled into our new home – the French Quarter district of the Port Orleans resort – it was time to start exploring Disney World! 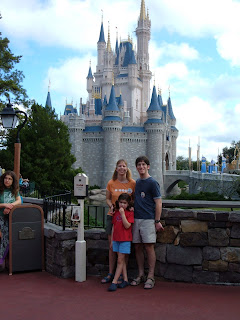 Natasha, Lily and Dave in front of the Magic Kingdom castle.

The first day was spent at the Magic Kingdom, doing lots of “must-do” Disney things – posing with characters, going on rides like “It's a Small World” and the Mad Hatter's Teacups, and seeing the various parades on Main Street, USA. 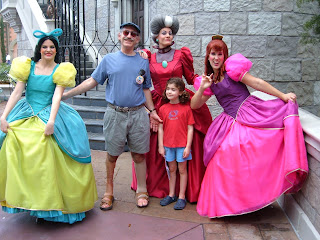 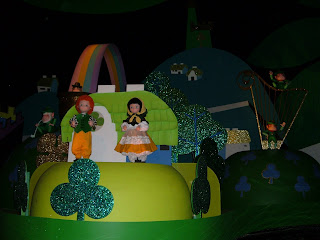 The Irish part of "It's a Small World" 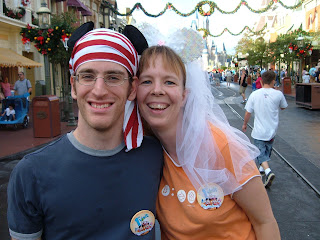 We finished the day with a spectacular night-time Spectro-magic parade, followed by fireworks over the castle.

The next day we headed off to EPCOT. 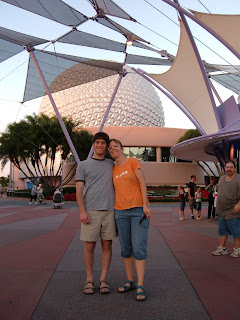 The main event was a Princess Lunch where Dave's niece (and the rest of us, of course) got to meet various Disney princesses, such as Belle and Cinderella. 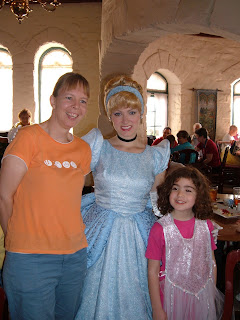 Natasha was almost as excited about Cinderella as Lily was!

Dave and Natasha spent most of the rest of the afternoon waiting on line for a hang-glider simulation ride (but we're not bitter), and also got to check out some of the agricultural research projects going on at EPCOT, which was a highlight for Natasha. We spent the evening wandering around the various countries of EPCOT and we got to meet some characters from Winnie the Pooh. We finished off the evening with a movie about Canada hosted by Martin Short. 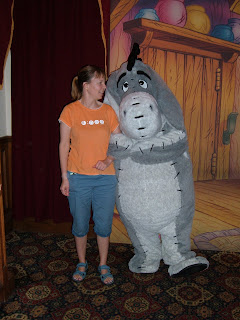 Natasha gets friendly with Eyeore. 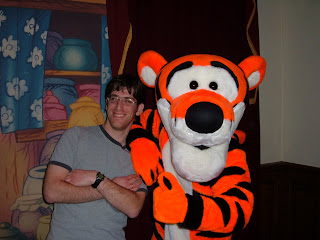 Dave gets tough with Tigger.

Our last day was more low-key – we spent the morning back at the Magic Kingdom going on a few more rides (Thunder Mountain, Pirates of the Carribean), and Natasha and Dave got their picture taken with Mickey himself. 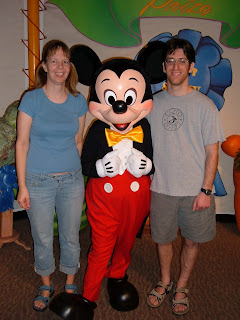 That afternoon, while Dave's family took a quick trip to the MGM Studios theme park, Dave and Natasha spent a relaxing afternoon hanging out by the pool back at the resort – reading, swimming, watching lizards chase each other, etc. 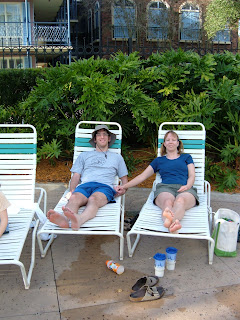 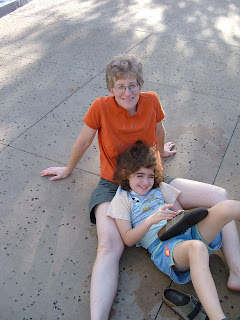 Dave's mom and Lily hang out with us for a bit.

The next “morning”, we got up at 2:45 am so we could get on a shuttle bus back to the airport, and catch our 6 am flight back to Edmonton. Fortunately, our flights went smoothly, we made our connection, and our car even started after a week of sitting in the Edmonton airport parking lot.
Posted by Dave at 21:43 No comments:

November was our month of busy weekends which was great. Natasha's parents came to visit over the long weekend in November. They arrived on Friday night in time to join us in a Shabbat meal followed by services at the synagogue. On Saturday morning we did our normal Saturday morning routine of visiting the farmers' market and the library. Natasha's mom especially liked the samples of pears from BC! 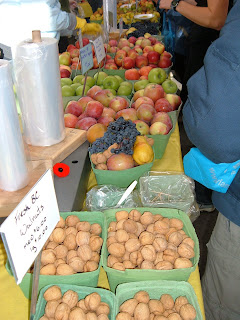 A sample of the awesome produce at our market. 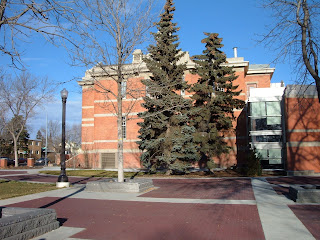 The library is just around the corner from the market.

Saturday afternoon we went to MEC (Mountain Equipment Co-op), which is a must-do in Edmonton for Natasha's dad. Natasha's friend, Natasha Wiebe, joined us in this expedition.We had ulterior motives for going there, as we wanted to get better equipped for these cold Edmonton winters. We each got a set of super-warm long underwear, warmer mittens and balaclavas – to keep our faces warm on those cold days. Dave also acquired a warmer winter jacket and wind pants. (Note: As of January 13 we haven't had to break out much of this colder weather gear yet, but we are assuming that we will appreciate it more come end of January and into February.)

While at MEC we saw the most ridiculously over-sized truck we have yet to see in Alberta. It was raised so high off its tires that one needed a small ladder to climb into the cab. Our car could have easily driven under it without a scratch. Unfortunately, we didn't have our camera with us, so we don't have any pictures.

Saturday night we went out for Mexican food, which was really good. Sunday we made a trip to Costco and when we got home, Dave realized that we could watch CFL football playoffs on his computer with a live feed from CBC. So we watched our beloved Saskatchewan Roughriders beat... some other team. Dave didn't realize he was marrying into such a sports-frenzied family! We finished off the visit with some spanokopita brought to us by Natasha's mom and awesome fried shrimp made by Natasha's dad. Oh, and watching a few episodes of Friends. 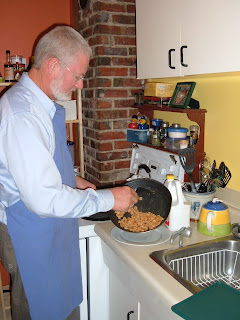 The shrimp is almost ready to eat - yum :) 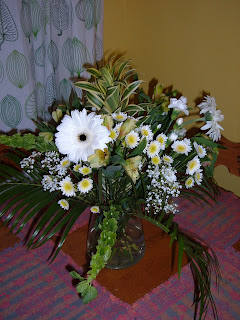 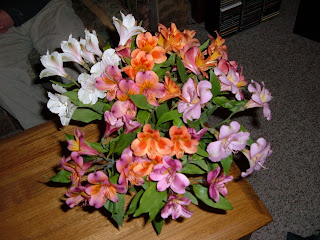 And these ones too. Thanks Mom!

The following weekend we made a quick overnight trip to Calgary to visit with Alissa, Kirk and Robyn, and Donny and Marika, who were checking out the place in anticipation of moving there. We had a fun evening hanging out at Donny and Marika's hotel, and the next morning we hit a mall. It was close to a place Donny and Marika wanted to check out for housing possibilities, and Robyn and Kirk already had appointments there. It was so fun to hang out with Waterloo friends again. In the afternoon we visited Alissa's church, since we wanted to see where she works. And look, her name's even on the sign. 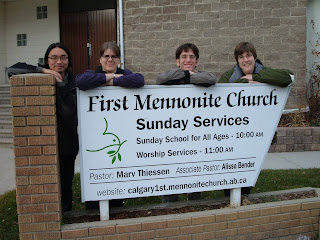 Donny, Marika, Dave and Alissa with the updated sign.

The next day we were back in Edmonton for Mitzvah Day at the synagogue. All of the Jewish synagogues and organizations in Edmonton donate a huge amount of items and Mitzvah Day is when they all get together and pack it up to send to various organizations. Dave worked with the technology group most of the day and Natasha ran back and forth between various places, helped out in housewares, and carried boxes. It was amazing to see the boxes and boxes of items being packed up to send to over thirty different organizations.

The following weekend Donny and Marika came to visit us in Edmonton. It was so great to be able to host another set of Waterloo friends. We did our normal Saturday morning routine and then Marika and Natasha headed out wedding dress shopping. Marika was awesome to shop with and found a number of good dresses. Below are some pictures to give you an idea of what fun we had! 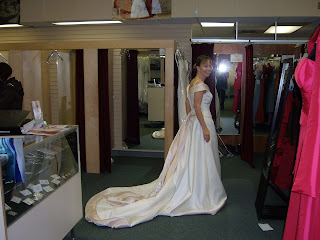 This dress was very heavy and had a ridiculously long train.
But it's fun to try on dresses that are unrealistic! 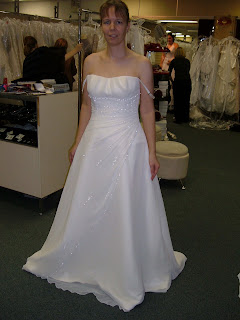 I didn't want a strapless dress, but again, I had to try one on. 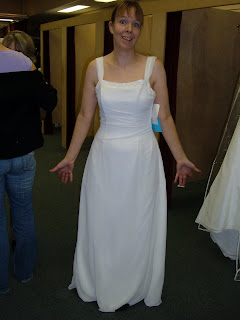 This dress was a lot closer to what I was looking for. 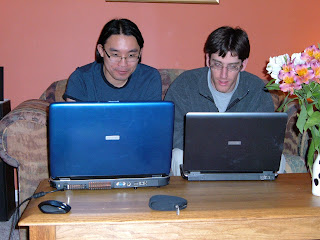 While Marika and I wedding dress shopped, Dave and Donny did... stuff... on their computers!

Sunday we spent most of the day at West Edmonton Mall. It was fun to see more shops and look for shoes, random CDs, and other stuff. Then we watched Saskatchewan beat Winnipeg to win the Grey Cup!!! Since Donny and Marika aren't huge football fans, and Natasha didn't gloat too much, it was a good evening :)
Posted by Natasha at 20:02 No comments: