It's time for Update 2 of the "41 Before 41" list. (And I accidentally typed "41" with the shift key down and it shows up as "$!" which I am taking as a good sign of...something!) Anyways, I've gotten a few things actually crossed off the list this time. Yay!!!

(And I am also only posting about ones where there have been changes. It gets too unwieldly otherwise. To see the original list go here. To see the previous update, go here.)


4) Read through all the Today's Parents.
(We have ended our subscription to this magazine but they are still sending them to us. And we haven't read them since last March. So I'm going to read them and recycle them and then get them to stop sending them to us. Probably. I like free.) The pile in the picture on the left is done. I still have most of the pile in the second picture to go. And they have FINALLY stopped sending them to us and I didn't even have to do anything about it so I don't have to debate with myself about "It's not honest to receive them if we're not paying for them" vs "THEY'RE SENDING THEM TO US FOR FREE!" Yay!

8) Get Sam toilet trained. (day trained only) Sam is not toilet trained yet but Rachel has started sitting on the potty. It's now a race to see who will be trained first. sigh.

11) Make it to a Zumba class.
(I have been trying to get to one for seven months. This is looooong overdue. (BTW, the classes are at horrible times for me which is why this one is difficult.)) DONE -- as of February 16 thanks to our long weekend plans of a road trip getting cancelled.

16) Blog weekly about Hymn of the Week. I find this one hard to do when we don't go to church so I haven't done so great with it.

17) Register with the stem cell and marrow network.
(I wrote away for information in September. I just need to do two quick things and send it back. Again, why hasn't this happened yet?!?!) Done January 30 (If Dave had been home I would have gotten him to take pictures of me swabbing my cheeks (hopefully in the correct manner) to get my DNA samples. That would have been a sight to see. Fortunately for me (and you!), only Sam was around to witness it.)

35) Perform five random acts of kindness.
(Suggestions welcome. How to do this anonymously???)  Shoveled neighbour’s driveway and sidewalk – Jan 28; (UPDATED TO ADD: Neighbour B came over and told me that Neighbour A (who's driveway I shoveled) came to ask if he knew who had done it because he was quite happy someone had done that for him. Supposedly Neighbour A is a hermit who doesn't talk to people in the neighbourhood and this was the first time ever Neighbour B had talked to Neighbour A. And Neighbour B talks to EVERYONE, including my parents who visit once in awhile from Saskatchewan. All this is to say, you never know what will happen because of a random act of kindness so go out and do one! (Now my public service announcement for the day is done.))

Does letting someone go in front of me in line at the grocery store count? (Although I really only did that because Dave decided to go find some more things after I'd already been in line. So I knew he wouldn't be back in time for me to pay for everything together so I let the people behind me go ahead of me. I don't really think it counts. I think need to do it for "no other reason than to be nice." What's your opinion???)

36) Dust Sam's shelves.
(Again, this is kind of dumb but every time I'm in his room I notice the ever-growing layer of dust on his shelves. Why have they not been dusted since we moved in last May? It's ridiculous!) Done January 30 (Lucky for you, you get to see before pictures with dust (the top row) and artistic after pictures with no dust and reorganized shelves (the bottom row). I also cleaned his desk off but there's no before picture of that.) EDITED TO ADD: His shelves don't still look this awesome but they did about three weeks ago when I first did it. 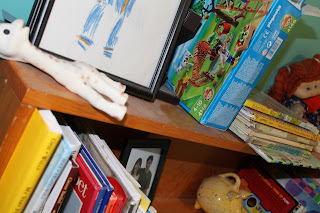 (I have a website I started following last year during Lent. I want to make this a habit.) I was really behind on this but now I'm getting back on track. After this afternoon I should be completely caught up with my Bible reading website. Which is this one, if you're interested.

38) Give up Facebook for Lent.
(I did this last year and it felt so good. It totally changed how I use Facebook and I think it would be good to do again this year.) So far, so good. I'm also trying to check my Blogger Dashboard less often during the day which has been hit and miss so far. I mean you all don't write a new post every ten minutes do you? So why do I need to check it that often?! A few times a day should be good, right?!

39) Don't yell at the kids, or lose my temper with them, for a week.
(This is my major failing as a parent. I get frustrated and impatient and I yell. If I don't yell for a week that should help change my habits right?) Okay, so the only reason this one isn't off the list yet is because I've been doing better with this but haven't actually kept track of myself not yelling for a week officially. So maybe I should start that one today. But having this on my list has definitely curtailed my yelling which makes me happier. Yay!

41) Complete everything on this list.
(I know, I know. That's kind of a cop-out. I'm having a hard time thinking of number 41. How about you help a sister-blogger out and make some suggestions as to one last thing I could do??? Thank you!) I'm still open to suggestions for this one...
Posted by Natasha at 15:27