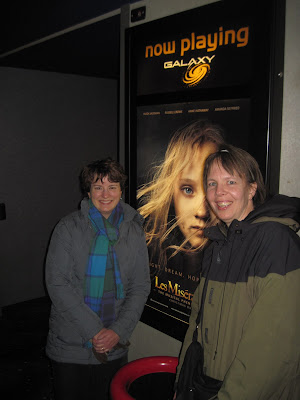 This past Sunday Dave and I went on (another!) date. Ever since we'd gone to see The Hobbit, I'd wanted to go and see Les Miserables. And you must know, that in all of 2012 we only went to see one movie in theatres. In 2011 we saw two. I think we only saw two or three in 2010. Having young kids kind of does that to your movie going abilities! Anyways, the fact that we have already been to see two (TWO!!!) this year (which is only 46 days old) is quite momentous. Anyways...

I was fortunate enough to see Les Mis twice on Broadway and I kind of wanted to see the movie but I also kind of didn't. I was scared it wasn't going to measure up. And I must say that I still don't know if it does. (The following may contain spoilers so if you don't know the story and want it to stay a surprise STOP READING NOW!!!)

I LOVED the opening scenes. The immensity of the ship the prisoners are hauling in, the struggle of Jean Valjean in the chapel after the bishop forgives him, the desperation of Fantine's plight once she loses her factory job, the complete scuminess of the Thenardier's -- there was so much to love. I also liked how when Fantine and Eponine were singing of their lost loves there was no montage of what they were thinking -- it was just them singing.

I need to give a shout-out to my blog friend, Erika here. She posted a video and a story awhile back that, since seeing the movie, she now sings, "I have bought your soul for God" to her husband, so when the bishop was getting close to that moment (which is actually quite a serious one) Dave and I were looking at each other and laughing! And of course, we (quietly) sang that line to each other along with the bishop. Thanks Erika! :)

I did not like the added scenes and extra songs. Dave didn't like the lack of singing talent Hugh Jackman and Russell Crowe displayed. He said it distracted him. It only distracted me once, as Hugh Jackman obviously missed a high note in "Bring Him Home."

I found that the desperation hit me harder in the movie. How could Valjean just take Cosette? Weren't there any checks and balances? Who today would send a eight or nine year old girl off with a strange 35-ish year old man with no compunction? The quickness of how Fantine fell onto hard times after she lost her job was depressing. The futileness of the student's revolution was much more apparent to me in the movie as was the horror of Valjean dragging Marius through the sewers. I think movies just have a different way of portraying things than musicals. The love story of Cosette and Marius has never appealed to me and the movie just made it much that more apparent. (I may have gagged in Dave's direction a few times. "I love you forever. What's your name?" urgh.)

I loved the casting of the Thenardier's. I thought it was perfect and they made me laugh -- when I wasn't pissed at them. It wasn't until the credits when I realized Javert was Russell Crowe and now I almost want to see the movie again. And with the teenage (early twenties?) casting of Cosette, Marius and Eponine I realized how young they really were. (And, moreso, how old I really am! Ha!)

I love that with the movie, more people will have access to Les Mis. However, I wonder what people who haven't had a chance to fall in love with the musical will think of it? I knew intellectually that the musical was called "Les Miserables" -- the miserable ones -- but the depressing-ness of it didn't really hit me as much in the musical as it did in the movie.

And, if after seeing the picture at the top of this post, you are wondering what happened to Dave here's the story. We had had small group at Tim and Janice's after church that day and Dave and I mentioned that we needed to leave in time to go see Les Mis. Tim and Janice decided, on the spur of the moment, to go see the movie too. They thought we were at a different theatre and ran into Dave, who was getting snacks, in the lobby. I didn't see them until they walked into the theatre, and at first I thought something bad had happened and that's why they were there. Since they were there to see the movie, we turned it into an impromptu double date! It was a lot of fun.

And to sum up, I look awful in the picture, because just as both times I saw the musical, when Jean Valjean is dying and Fantine starts singing to him from heaven, I lost it. Completely sobbing. I don't know why it does that to me, but it does. And the movie made it happen again, so maybe the power of Les Mis transcends mediums, despite everything I've just said.

Have you seen Les Mis? The musical? The movie? Both? What did YOU think?
Posted by Natasha at 10:26