For Channukah Dave's parents gave Sam a coupon book for various activities to do with them. One of the coupons is to go to a Kinderconcert. The KW Symphony puts on special concerts a couple of times per year aimed directly at kids. These concerts are quite informal with kids having the option to sit on cushions at the front of the "stage." I wanted to take Sam to his first concert so we bought tickets for the one last week. And ended up going to the wrong Museum. Boo :( I called the symphony, voiced my frustration and they gave us tickets for this week's concert! Yay! So today, after double (and triple!) checking the concert's location, we were off. 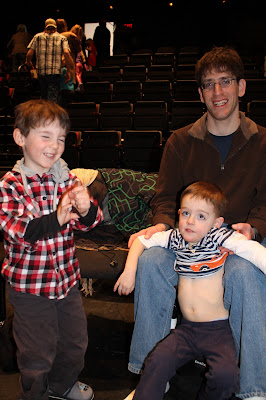 We ran into Harry, a friend of Sam's from preschool, so it was fun to sit with his parents and talk. Today's concert's theme was brass instruments and there was a quintet to play the music. We actually learned a lot about the instruments as well as hearing fun music. I said to Dave that next time I was going to bring a pen and paper to write stuff down! 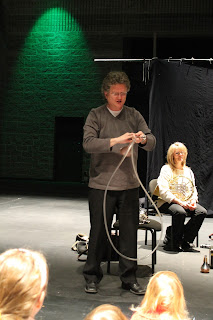 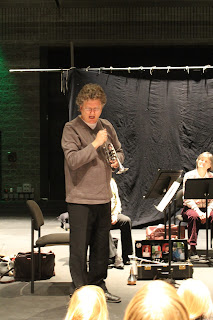 Each player introduced us to their instrument. The trumpet player showed the basics of how to play brass instruments by explaining that you basically "blow raspberries" into the instrument to get the sound! And he demonstrated how the earliest trumpets would have been designed -- a mouthpiece, a piece of tubing, and a bell (or funnel) for the sound to come out of. He also showed us a tiny piccolo trumpet which was pretty cool. 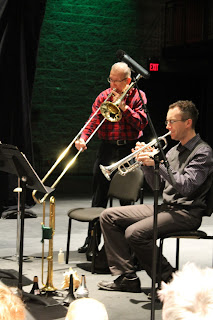 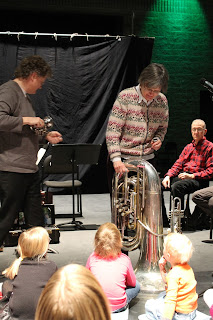 The tuba player then compared her tuba to the piccolo trumpet and it was pretty cool to see the difference. The french horn player showed how you could control the notes with just your hand and the bell without pressing any keys. That was very neat! And they also all played "Frere Jacques" in a round using just their mouthpieces to demonstrate how those worked. That was awesome! 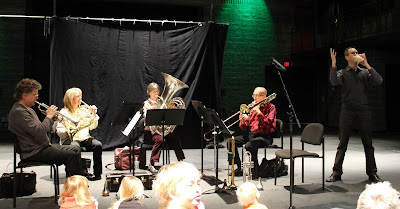 To introduce the theme to the kids, the premise was that the teddy bears had a picnic and the smallest teddy bear had a dream about a buzzing bee who was telling him about all the different instruments. Then the bear got to join the brass quintet and play the conch shell, which is what the person on the right is playing. It was quite funny. 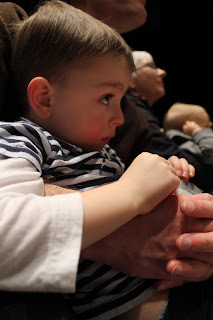 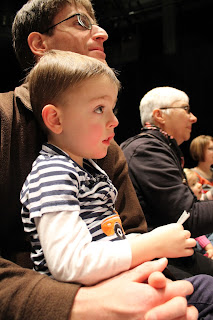 Sam was quite entranced during the whole concert, and held his own "buzzy bee" instrument of a comb and tissue paper. Each kid got one to play (and take home too!) as they entered the concert. Dave and I agreed that this was an amazing experience and are hoping to take Sam and Rachel to each one in the next symphony season.
Posted by Natasha at 11:00