Today was a very full day. It started early this morning when Sam woke up at 8:18 and Rachel at 8:27. We ate our various breakfasts and then headed out to do some errands. Doing errands was a little crazy because Marcia was dropping Olivia off at 12:30 for a few hours and we left home around 10:15 :)

We headed to Save-On for groceries where Sam got his free cookie and we bought baby food to make a donation to the Food Bank in honour of Mia's first birthday, and then to Dollarama. At Dollarama I bought more decorative rocks for the flower vases on the piano and some clothespins. I might have mentioned that we don't have a lot of space and we needed somewhere to display cards. Since I want the piano mostly free for interesting flowers we needed a new space. So with rope and clothespins I came up with this: 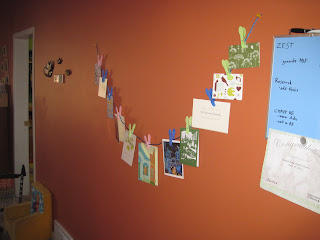 I think it looks really good! Then we headed off to Laurel's for new flowers since the gerberas I got for free over a week ago weren't doing so well. I bought some anemones and the berry one below which I can't remember the name of. Ooops! 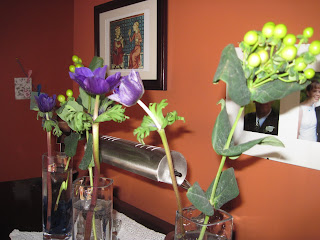 As I was in the midst of arranging flowers Olivia came over. She and Sam played together fairly well, except for a few sharing disagreements. I think it's the age they are because usually they get along quite well. Rachel was very entertained by all the action. While Olivia was here I ate lunch, fed Rachel her lunch, chopped all the vegetables for the veggie-beef stew I made for supper, hung the card string and cooked up chickpeas and Magic Bullet-ed them for Miss Rachel to eat. It was a fairly busy time. 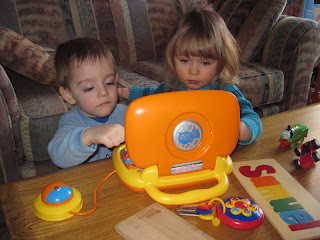 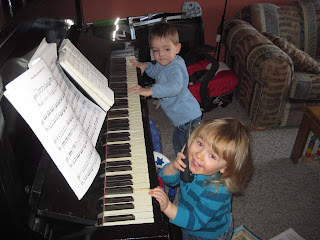 After Olivia left, I put Rachel down for nap and Sam in his bed for quiet time. He didn't really want lunch today so he just finished his oatmeal from breakfast. sigh. I mixed the stew together, scooped the mushed up chickpeas into ice cube trays and then had about ten minutes to drink a Coke and read before Rachel woke up. 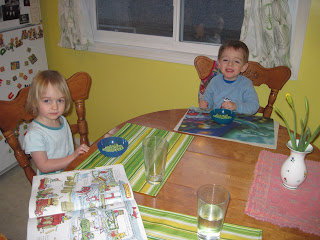 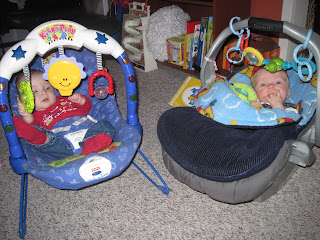 Megan fell asleep shortly after they got here and Kelsey and Sam wanted to play with play-dough. Fortunately Dave was home by then and so he supervised them, Rachel watched and I put away Rachel's laundry from yesterday. Rachel is totally an extrovert because she was totally happy in her Bumbo or bouncy seat or exersaucer watching Sam and Kelsey, or Sam and Olivia, play. And man, did she talk! 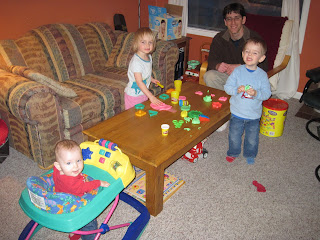 Then I decided that I would entertain Kelsey and Sam by baking cheese biscuits with them. It actually worked quite well and they each got to put half of each ingredient in and help stir. I think they really enjoyed it. 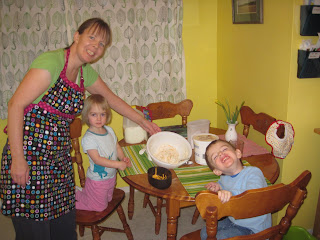 Neither Sam or Kelsey ate super-well for supper and so they played while Dave fed Rachel and I ate. Then Megan woke up and was fussy or content for about an hour. To be honest though she was mostly content. Enough so that I baked banana muffins with Sam and Kelsey. Yes, I'm completely nuts! Baking twice in two hours with two toddlers.

After we baked the banana muffins it was time for pjs for everyone and to taste the fruit of our labour. But first we had a small dance party to Brown Eyed Girl and Sam and Kelsey were so silly Rachel was laughing at them. Megan joined in on our dance party but most of the time she hung out in the swing. 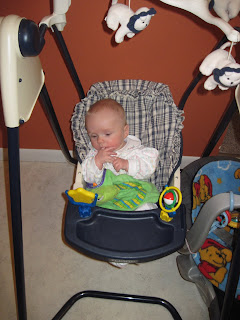 It was a fun evening and Megan and Kelsey were a treat to look after. Daniel and Jenelle offered to return the favour so I think Dave and I might try and catch a matinee some weekend afternoon sans children some time. Yay for reciprocal childcare!