So Dave and I are having major milestone birthdays this year -- he turns 30 in a little less than two weeks and I am turning 40 at the beginning of May. So we were talking about doing a warm winter getaway at some point but we've decided to not spend our money that way. However with (what seems like) all of my friends on Facebook writing about their warm winter trips I am becoming envious and thinking that maybe I need to quit Facebook :)

Anyways, Dave and I talked about spending a little more money on ourselves this winter because we weren't putting a huge chunk towards going somewhere and thinking that maybe smaller things each week would make winter more bearable than one big (relatively) short trip to somewhere warm. So one of my "Making It Through Winter" things is having flowers around.

When I was at IKEA earlier in the fall they had small bud vases with fake Gerbera daisies in them and I was so tempted to buy them for real flowers. But I decided not to. With not going on our big trip, I felt like I could splurge a little more now so I decided to buy some vases today and have flowers in them all winter. I got these at Dollarama so it wasn't like they were super-expensive!

I don't like the placement of these vases right now -- I think the piano looks really cluttered and the flowers don't stand out enough -- but we don't have a better option to put them where Sam won't get into them. So I will continue to think about placement but for now here they are. 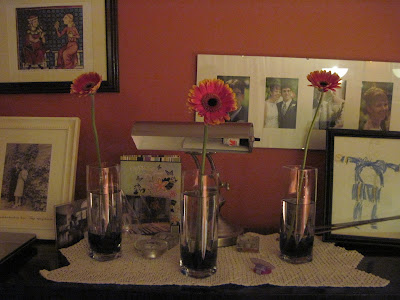 And I got the Gerberas at Laurels on Whyte and she wasn't confident about how long they would last so she gave them to me for free! Sweet! In return I promised to keep buying flowers there all winter because she has awesome selection and actually sells flowers by the stem, as opposed to Save-On and Costco which only sell them in bouquets. So here's to the small stuff.

And we'll get our trip. Eventually.

PS. After I posted this picture I realized where Rachel's purple soother, which I'd been looking for for about an hour, was! Hahaha :)

PPS. Dave said viewing recent photos on our blog is "like internet searching our house!"
Posted by Natasha at 21:38