Well Dave had a very busy day on his actual birthday so instead of celebrating Dave's birthday on one day, we've made it a week-long affair!

On Saturday we went to Kim and Jacqui's to celebrate Dave and Kim's birthdays together. They had mini-cheesecakes from Costco and Man! Those things are dangerous. I think I ate about five or six and Dave had more :)

On Monday I made Dave's birthday meal, a day early because we were supposed to go out for dinner on his actual birthday. I made Spiced Beef Skillet Dinner from our Canadian Living Make It Tonight cookbook.

On Tuesday, Dave's actual birthday, Sam sang Happy Birthday to Dave in the morning. It turned out that Tash was sick so she couldn't babysit, so I made Dave another meal he likes -- Beef and Sweet Potato Stirfry from the same cookbook and he got his cards from me and the kids.

On Wednesday we had cheesecake because I didn't have time to get any before Wednesday. I got the cheesecake sampler from Safeway with Brownie Swirl, New York Style, Strawberry and Caramel Pecan. Yum! 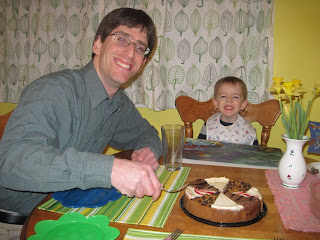 On Thursday we went out for dinner, just the two of us!, to The Pourhouse on Whyte. The food was really good but the service was super-slow (it took an hour for us to get our meal) and the portions were small. Too bad. 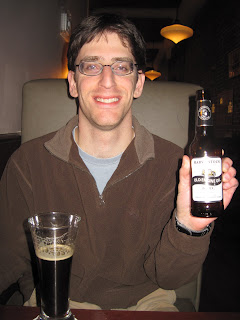 Dave with his beer, Old Engine Oil, which he said was good. 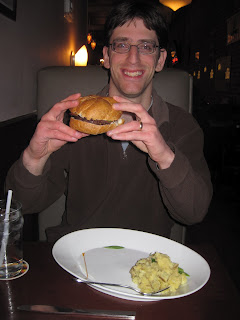 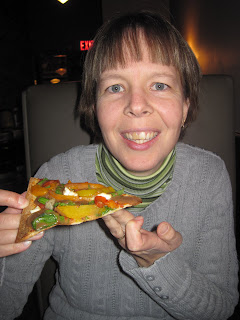 Finally we have our food. Dave had the Pourhouse Burger with Smashed Potatoes and I had the Garden Pizza.
On Friday, Sam, Rachel and I hid thirty items each for Dave to find around the house. I hid thirty chocolate coins, Sam hid thirty letters which spelled a secret message, and Rachel hid thirty diapers. 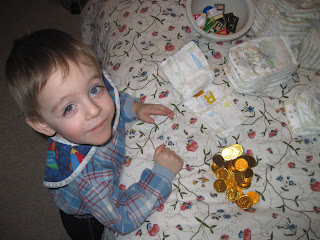 We made them all up into one package. Here are the thirty "packages" ready to go. 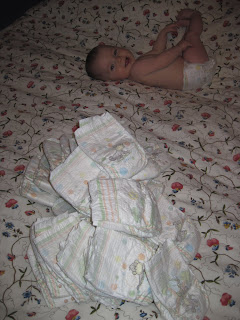 And then Dave came home to the following note on the front door: 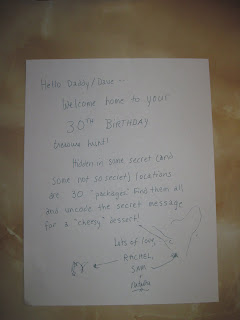 It was an awesome hide and seek game for Dave! And here is what the "secret message" was: 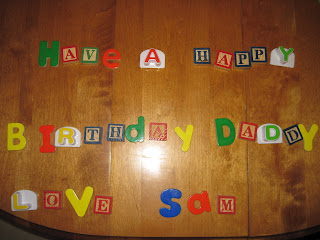 And you can bet it took me a number of tries to come up with something meaningful which used EXACTLY thirty letters!

Today we went out for brunch and to see Extremely Loud and Incredibly Close while Jenelle and Daniel took care of Rachel and Sam. We went to IHOP for brunch. Sam and Dave coloured while we waited for our food. 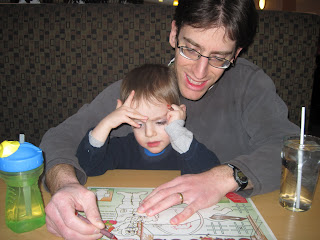 Just hanging around. The staff thought that Rachel was really cute :) They also thought she was a boy! Ha ha ha!!! 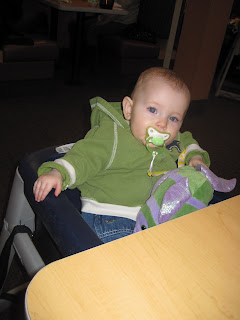 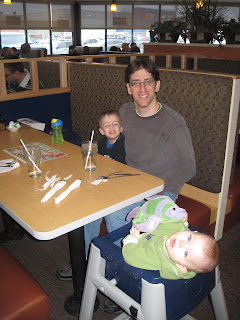 Dave and Sam with their food. Sam had a scrambled egg and a pancake and some of my fruit and some of Dave's sausage. Dave had the Bacon and Cheddar Hash Brown Stack with sausage and pancakes. It was extremely kosher! 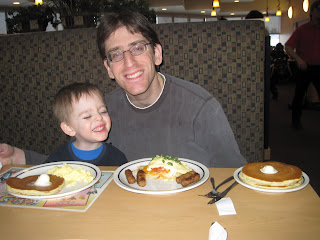 I had the Spinach and Mushroom Hash Brown Stack with a side of fruit. It was yummy except I don't really like fried eggs. However it was buried in a bunch of Hollandaise sauce so it was okay. 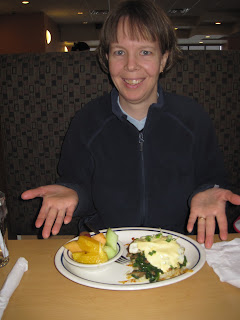 Before we sat down to eat we noticed an ambulance in the parking lot and two EMTs eating near us. So I asked them if Sam and I could have a tour of the ambulance and they said yes! We got to go in it and everything. Sam was most interested in "the blue things" also known as gloves :)

After IHOP Dave and I went to see Extremely Loud and Incredibly Close. It was a good movie but a little more serious than we had anticipated. Dave celebrated by having a Coke and Chili Cheese Fries. I had a piece of cheese pizza and a large Coke -- it was a deal. Except for the fact that I REALLY REALLY REALLY needed to pee by the end of it, it was good :) And except for the fact that Rachel screamed for an hour and a half straight for Jenelle and Daniel things went well on that end too. They eventually took her for a ride in the car and she conked out. Then she ate and drank 4oz from a bottle! Yay!

We had a GREAT time celebrating Dave's birthday and we'll have to see what next year brings :) Happy Birthday again Dave!
Posted by Natasha at 20:44