So today we decided to take the Chariot for a walk in the ravine to test it out. First we had to install the baby supporter so that Rachel could have a smoother ride. That was a little more complicated than we expected. 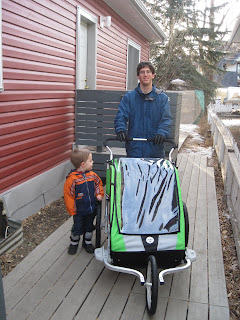 Then we had to walk to the Esso on the corner of 99th & Whyte Ave so that we could fill the tires with air. That was also a little more complicated than expected. I had hoped to get going by around 10:30 but by the time we had these two things accomplished it was 11:30. sigh. 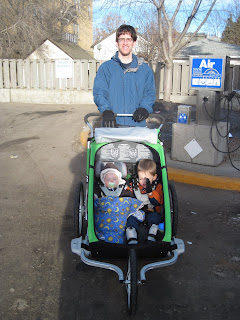 Then we decided to walk to Starbucks and get drinks. I got a Cafe Mocha and Dave got the same thing. Which I actually didn't realize until I was writing this post and asked him what he got to drink! Hahaha! With my Starbucks and our Chariot I totally felt like a yuppie urban mommy. So of course Dave had to get photographic evidence. 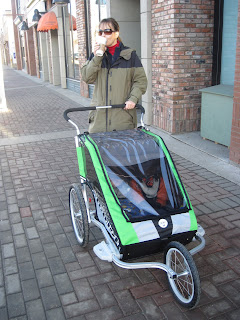 One of the many nice things about the Chariot is that I could totally drink my Starbucks AND steer the Chariot one-handed. Yay! It is soooo easy to push. And it totally fit through the doors at the Esso and at Starbucks. It's just a bit wider than our other stroller so I was a little worried. But many people had told us it would fit through single doors so we were trusting them.

Then we headed down Saskatchewan Drive, down 92nd Ave and into the ravine. We went a new way and there was a long, icy path leading into the ravine, which we weren't expecting. 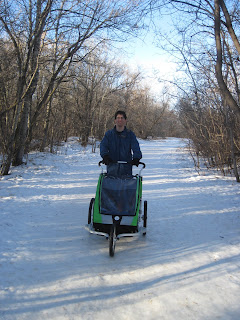 It was actually so icy that I stepped over to walk in less icy snow and Dave steered the Chariot down an exceptionally steep hill with the help of some trees. 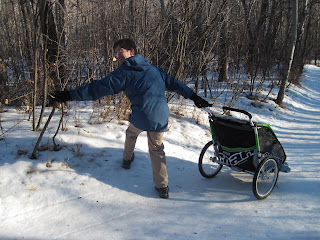 At first I was just taking pictures but then I felt I really needed to video it. It was well worth it. WARNING: If you have any fears for Dave or the kids sitting in the Chariot, DON'T watch this video. It will freak you out instead of making you laugh. I laughed so hard I cried.
Dave commented that he was an actual tree hugger after this!

After this little adventure we actually spent all of five minutes in the actual ravine before heading home. Poor Sam was looking forward to "walking in the ravine" so we promised him that next time we go for a "walk in the ravine" we'll actually spend the majority of our time... in the ravine. Crazy concept, I know!

My only concern about the Chariot, thus far, is that I wish I knew if it had brakes...
Posted by Natasha at 15:11

Labels: Making It Through, Parenting, Videos