Week in the Life -- Tuesday

This morning I woke up at 7:45. I checked "computer stuff" (aka e-mail, Facebook, blogs), had breakfast (same thing as yesterday), and made a pot of tea. I drank one cup while having a discussion with Dave and pulled out the veggie ground round to defrost for supper.

At 9:15 I made Sam's oatmeal because I thought he would be awake soon. I called Elena to tell her I'd likely be late to New Mom's since both kids were still sleeping. New Mom's meets every Tuesday and the core group of us has been meeting since August 2009 now. Elena and I had a good conversation about being a mom and a wife.

At 9:45 I woke up Sam, meaning I went in his room and he was lying there awake. I think he likes waking up slowly. I changed his diaper, got him started on breakfast (same one as yesterday), started a second cup of tea, and folded the laundry from yesterday which had been hanging to dry. 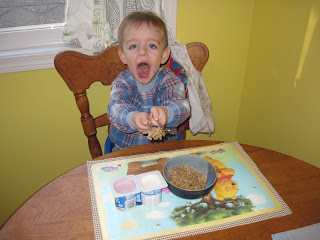 At 9:55 Rachel woke up crying so I nursed her right away. At 10:05 Sam was done breakfast so I cleaned him up and got Sam, Rachel and I dressed. I packed the diaper bag for New Mom's. At 10:13 I finished the second cup of tea. It was cold. This is not unusual.

I left for New Mom's at 10:40. Sam wanted to walk most of the way so I let him. He wiped out crossing the street to Elena's so we arrived with him freaking out. New Mom's is a blur of holding Simone (Alison's new little one), visiting and managing all the toddlers, not that Sam needs much managing but still...!

I got home from Elena's at 2:05 after a slo-oo-ooo-oow walk home with Sam. I tried to convince him to eat SOME lunch before his nap, ate a piece of quiche while talking to Dave on the phone, and played songs Sam was requesting from iTunes. Rachel hung out in her bouncy seat blowing raspberries.

At 2:25 I changed Rachel, left her crying on our bed, cleaned Sam up from lunch and tossed him in bed with a promise to rock him properly as soon as Rachel had nursed and calmed down. This, too, isn't unusual. Rachel fell asleep by about 2:45 so I went to rock Sam.

At 2:55 Sam was down but not asleep (and I thought he might not sleep today) and I ate a small piece of quiche and checked "computer stuff" before starting dishes at 3:07. I was tired but iTunes was playing, and that, and afternoon Coke, got me through! Then I started supper. 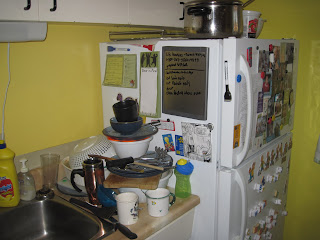 Rachel woke up around 3:40ish which was a short nap for her since she only slept for half an hour at New Mom's. She freaked out while I finished supper. By 4:06 Rachel had calmed down in her bouncy seat, I had nursed her and then I woke Sam up. It was another short nap for him. sigh... 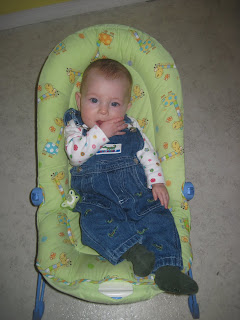 By 4:21 Sam was very involved in the pouring activity (another Productive Parenting idea) and I nursed Rachel again since she hadn't nursed well earlier. At 4:32 I cut Rachel's nails. At 4:32:10 I cut the skin on Rachel's thumb (I do this every time - boo). At 4:32:25 I gave up on cutting Rachel's nails and cut Sam's instead. It went much better. 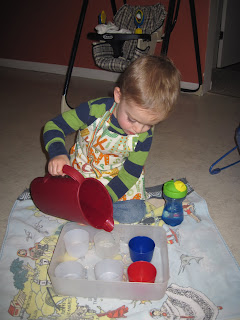 At 4:45 we moved on to another e-mail (have I mentioned Sam LOVES these things) but it was silly (exploring the concepts of "open" and "closed" which Sam has down pat) so we tried this one with cotton balls instead of pennies, but Sam just wanted to dump the cotton balls from one container to another. Rachel hung out in her other bouncy seat -- the exciting one with the toy bar -- and I did some more dishes. Can you spot the baby in the picture below? 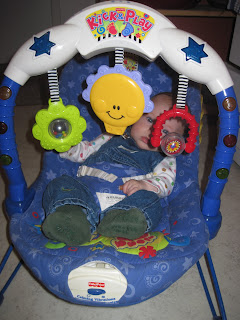 Sam and I shared a snack of apple slices at 5:15. I don't think he ate enough for lunch and I fixed some of Sam's board books which had ripped.

At 5:19 Daddy/Dave came home -- we had a small party which included diaper changes for both the kids and reading books and Rachel sucking on Dave's finger and working with Sam on his lower case alphabet letters (his impetus) and playing with the flashlight and dusting. Yay! 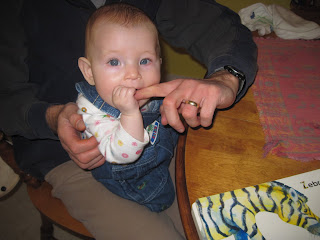 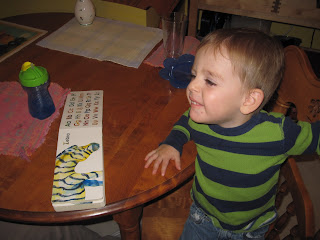 At 5:52 I nursed Rachel so I could eat dinner. And by 6:10 it was suppertime -- seven-layer dinner, which was very good. In fact, I ate three helpings which might have been a bit much. And yes, I think I'll post a picture of our supper every night this week. Isn't it interesting?!?!? Rachel sat in her exciting (toy bar) bouncy seat during supper. 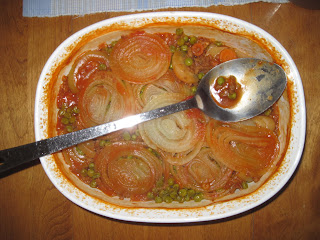 At 6:35 everyone got changed into pjs and hung out on our bed pretending to sleep. Except Sam kept playing with the flashlight. I nursed Rachel again.

Finally at 7:05 it was the time Sam had been asking for all day -- PARADE TIME! -- it was maximum craziness. We did this e-mail first on Sunday and Sam really really really LOVED it. I think he likes that we all get involved, even Rachel who just seems confused by the whole thing. I've even made a "Parade Mix" from Sam's Kindermusik CDs on iTunes so all we have to do it press play. I love Kindermusik!!! Then we looked at pictures from the day. Sam loves looking at pictures so this was a HUGE highlight for him. 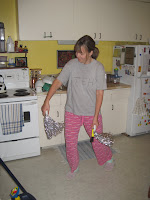 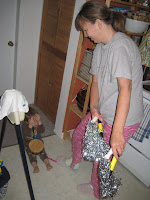 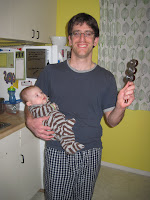 At 7:25 I made smoothies (fruit, oj and yogurt) for Sam and Dave and a milkshake (ice cream and fruit) for me. Sam and Dave played with play dough and their guitars and Rachel played on her play mat. I uploaded some pictures to the blog while I was making smoothies.

By 7:45 we were watching "the Singing video" as Sam calls it. It is really just a DVD of videos of Sharon, Lois and Bram, Fred Penner and others singing kids' songs. Sam really likes it and knows a lot of the songs. We drank our smoothies and milkshakes, danced, and sang with the whole family on the couch. Rachel seemed very intrigued by the whole thing. I nursed her twice during the video and the second time (at 8:30) she fell asleep. 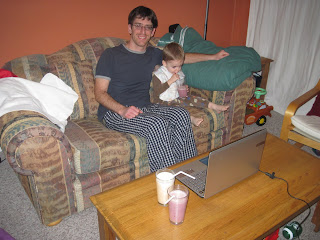 By 8:38 Rachel was down (I hoped for the night) and by 8:47 Sam was down for the night. Sadly Rachel woke up fussy at 9:17 which put my big plans of more "computer stuff" on hold. I also wanted to go to bed early tonight because tomorrow Olivia is coming for part of the day.

But we've given Rachel a colic tablet and Advil and I've nursed her a few times and so far nothing is working and it's 10:33. Right now she is quiet in her bouncy seat watching Dave dry dishes so maybe she'll fall asleep soon. We shall see. It's shaping up to be a looo-ooo-ooo-ooong evening.
Posted by Natasha at 00:33