Up, Up and Away

After a relaxed morning at home, we headed out for an afternoon of adventure, excitement, and errands. We started off with a stop at McDonalds for lunch, where Sam devoured a Happy Meal, complete with a toy duck (or possibly a goose...?). 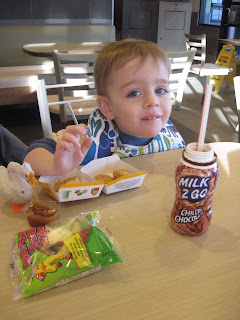 Note the unidentified fowl on the left.

Then, it was off to the Alberta Aviation Museum for Sam and I, while Natasha and Rachel headed off to do some errands and a bit of shopping. It was my first time at the museum, and although Sam had been once before, he didn't really offer much in the way of a guided tour.

The museum is a loosely-organized collection of old planes (both military and commercial), helicopters, and other aviation-related items (uniforms, radar equipment, etc.) The following photos give a sense of our wandering through the museum for a couple of hours but, like the museum itself, are in no particular order. 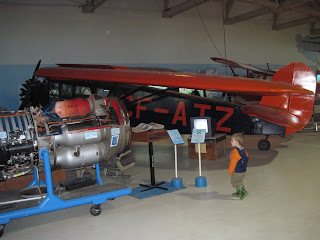 Sam checking out an engine. 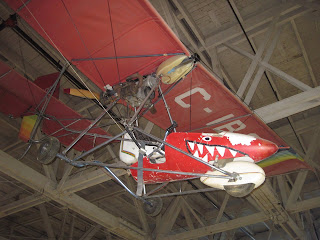 An ultra-light plane, which Sam immediately identified as an "alligator plane." One of the many video stations scattered throughout the museum. This one focused on float planes (the Norseman, I think). Like most of the other exhibits in the museum, Sam was completely fascinated by it... for about 10 seconds! 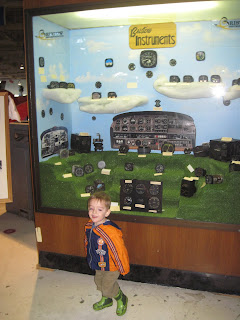 An exhibit on the instruments used in the cockpit. This photo also captures Sam's complete lack of interest in posing for pictures.
One of the highlights of the museum was a small plane that had been turned into a small "movie theatre". The inside had a handful of seats and a TV showing aerial footage of various sights in and around Edmonton. Sam had a great time going into the plane, checking out the video (for about 10 seconds) and then heading back out again. 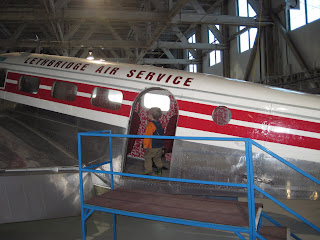 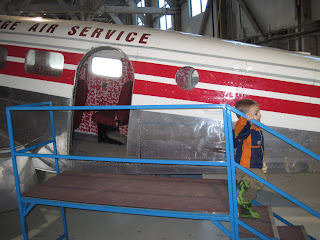 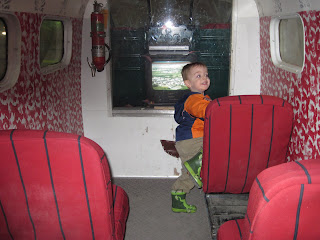 Sam settling in to watch the video. His favourite parts were the footage of the U of A campus, Whyte Avenue (you could almost see our house!) and the West Edmonton Mall. 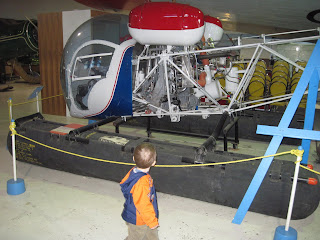 In addition to the planes, the museum also featured a few helicopters.

The museum is adjacent to the Edmonton City Centre airport, and also has a few planes on exhibit outdoors. We went to check this out, and Sam was particularly excited about riding a small vehicle used to pull planes. 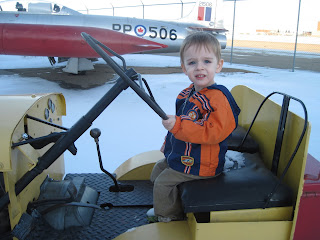 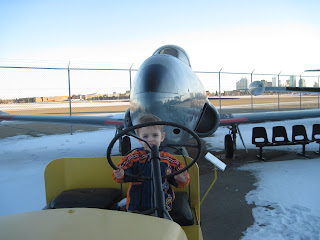 We're still not entirely sure if this was permitted or not...
I drew the line at trying to work the gearshift. 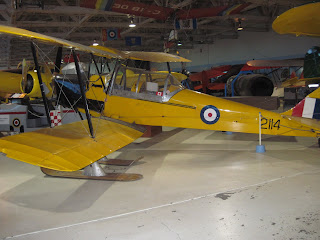 One of the many military planes on display. 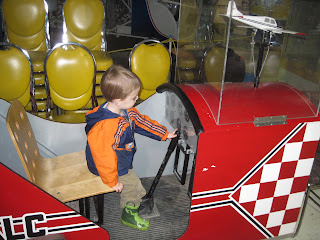 Sam trying out a rudimentary flight simulator. Moving the joystick caused the white model plane (in the top-right corner) to tilt up, down, left and right, and moving the foot pedals caused it to rotate back and forth.
Finally, there was a section of the museum where they were actively working on restoring planes, and visitors were welcome to go and wander around (just so long as they didn't touch anything!). We checked this area out a couple of times, and had a chat at the end of our visit with someone from the Ventura Memorial Flight Association, a group working on restoring a WWII-era plane to its original, air-worthy state. Unfortunately, I didn't take any pictures of this area, but you can see some of the Ventura restoration efforts here.
Posted by Dave at 22:35