Week in the Life -- Saturday

8:38am: Sam's yelling from his crib woke Dave and I up this morning. We must have slept through our alarm. Ooops :) We woke up to a layer of snow on the ground too! Dave and Sam had breakfast while I picked out clothes for the kids, checked computer stuff, got ready for Teresa to come clean and packed the diaper bag. Teresa is our awesome cleaner who comes once every two weeks. I love love love not having to clean our house. It's the best thing ever! 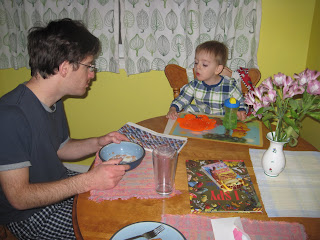 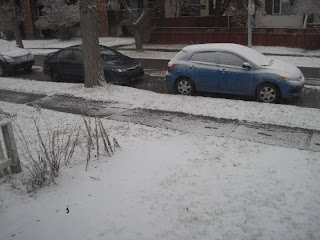 9:45am: I woke up Rachel and nursed and dressed her and got myself dressed. I also ate a piece of coffee cake for breakfast somewhere in there! Sam and Dave went out to scrape the snow off the car. Sam had fun making snowballs. Teresa arrived and we talked with her for a bit. 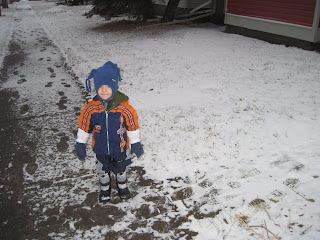 10:05am: We were finally on our way. We stopped at Empress Bakery for bread and then headed to Cafe O Play. We arrived around 10:30 and scored a sweet front, corner table. Sam played and played and played and Rachel hung out in the exersaucer and nursed and got cold. Dave had a coffee and a croissant and I had a mochacinno and a toasted bagel with cream cheese. Sam got a Four Berry smoothie and a cup of grapes. 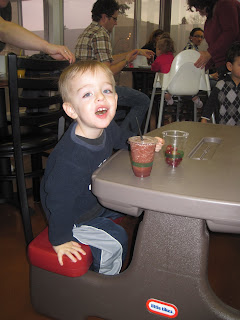 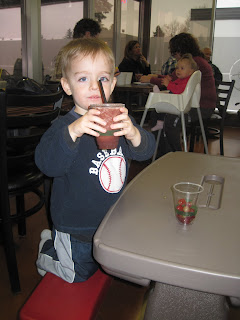 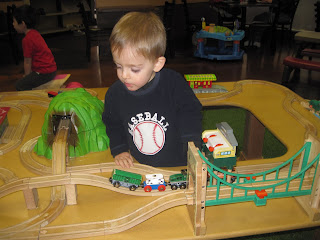 12:45pm: We left Cafe O Play and Sam didn't even fuss. Much. We got home and I changed Rachel and nursed her to sleep and Sam emptied the waste baskets and Dave made grilled cheese for everyone. Sam had a small temper tantrum somewhere in there and I read some of my book as I nursed Rachel.

1:45pm: I ate my lunch and then put Sam down for nap. By 1:55pm I was making myself a little more lunch (soup to go with the grilled cheese) and working on computer stuff -- pictures, responding to e-mails, etc. I was going to have a Coke but I got too tired so... 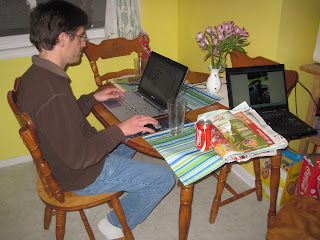 4:45pm: Rachel was playing on her play mat; Sam was done his after nap snack of a popsicle and I was having my daily Coke and going through the weekly flyers. Sam and Dave were playing the violin and ukelele and doing duets and playing with the traffic light Dave made for Sam, inspired by this e-mail. 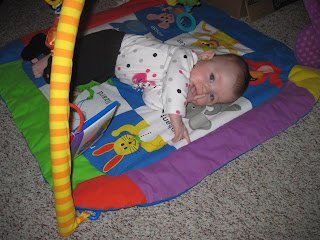 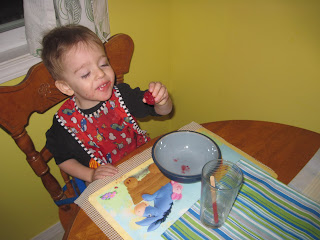 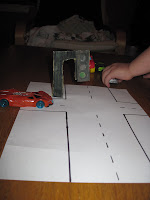 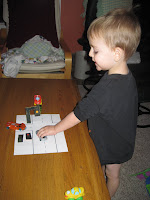 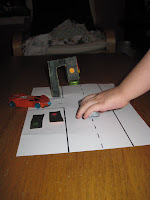 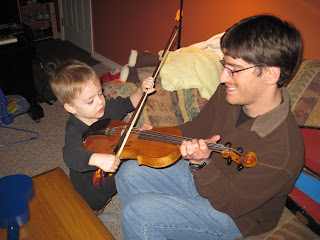 5:30pm: Sam was "reading" the flyers, Dave had started supper and Rachel was still on her play mat. Then she got fussy so I changed and nursed her. Sam also started to eat an apple. I held Rachel and looked at pictures, trying to be a little more choosy about which ones to print. 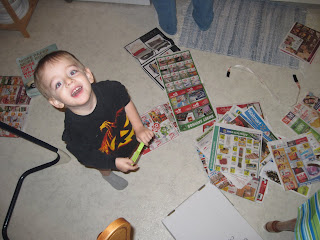 6:00pm: We started supper. We had Thou Shell Eat Beans. This is a favourite of our family and it's so yummy with black beans, pasta and lots of cheese. Yum!!! Rachel nursed while we ate and then hung out in her bouncy seat. Sam didn't eat but instead played with his letters on the fridge and looked at the "I Spy" books. 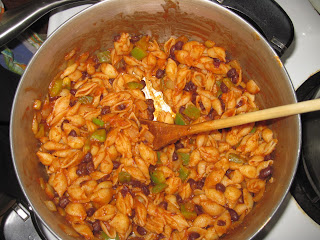 6:30pm: Sam decided he wanted to eat so I fed him and we told animal jokes. "Why did (insert animal here) cross the road?" "To get to the other side." Ha ha ha! "Why did (the same animal) cross the park?" "To get to the other slide." Ha ha ha ha ha!!! Hey, you do what you can to get kids to eat :) Rachel fussed in her Moses basket and Dave fixed Sam's car seat straps.

6:55pm: I started dishes and Dave played with the kids. Then I cleaned up a bit while Sam played and Rachel was on her play mat. Dave dried dishes and we just generally got ready for an evening of relaxing.

8:05pm: I nursed Rachel and she fell asleep. Sam and I changed into pajamas and Dave and Sam played with the letters on the fridge while I made popcorn. 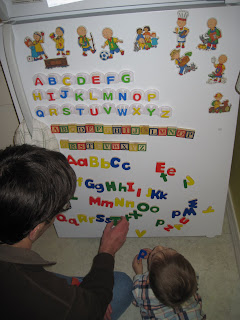 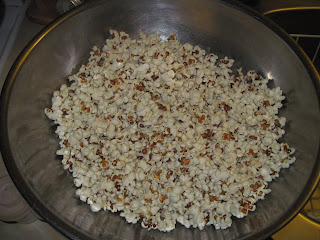 8:40pm: Time for Hockey Night in Canada. Yay!!! I uploaded photos to this post while we watched hockey and Sam ate popcorn for the first time. I think he liked it even though the popcorn seeds are very old so the popcorn was kind of gross. We'll do better next time... 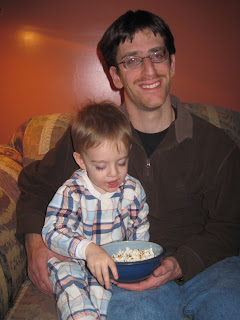 9:25pm: Sam was in bed and Dave and I kind of watched hockey while he took some pictures of me and Rachel. Dave left at 10 to pick up Twiebe at the airport and Rachel and I watched hockey and I wrote this post. Now I am going to bed to read and Rachel can hang out with me until she falls asleep.

Oh, something funny has happened the past two nights: I always go into Sam's room to say one last good night and make sure he's tucked in before I go to bed. Usually he's asleep but the past two nights he hasn't been and then he says, "I'm thirsty. Can I have some water?" It totally makes me laugh because I don't think it's a stalling technique; I do think he's actually thirsty. It's just so classic I laugh every time! Okay, good night! 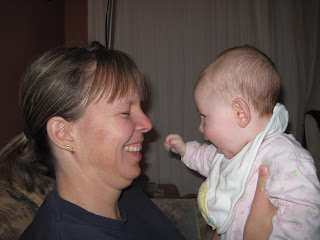 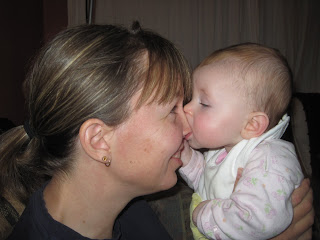 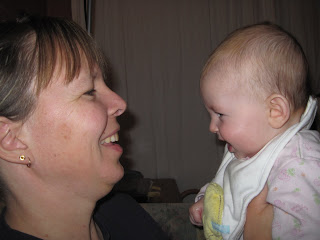 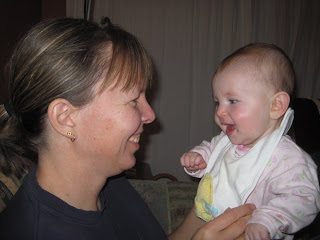 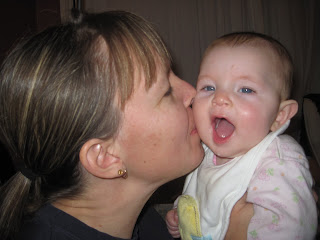 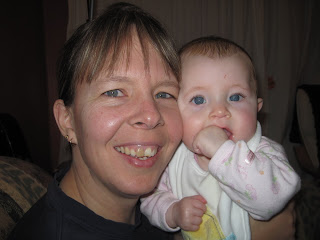