Week in the Life -- Sunday

8:44am: I woke up when Rachel woke up to nurse. Sam and Dave were already eating breakfast in preparation for going to swimming lessons. I slowly woke up and, after Sam and Dave left, nursed Rachel again. 9:45am: I jumped in the shower while Rachel hung out in the bouncy seat. After my shower I made a pot of tea, checked computer stuff and had breakfast. Today, breakfast was a bowl of Cheerios and a strawberry yogurt and the tea was Cranberry Apple Fruit Tea from Fort Edmonton Park. I also nursed Rachel again and changed her. That kid is HUNGRY and fussy today. (I also did some other stuff but I really don't know exactly what -- little things that all added up to take A LOT OF TIME!) 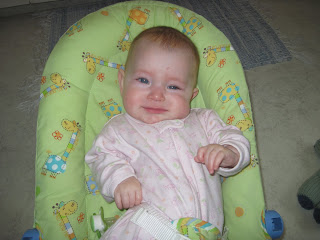 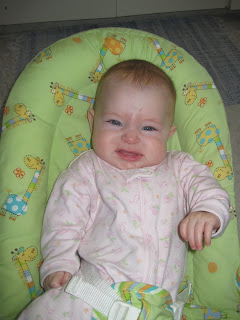 11:00am: I finally figured out that Rachel's fussiness might be due to being tired and nursed her to sleep in about five minutes. Then I organized in the living room and got rid of a few of Sam's books and toys which he doesn't play with anymore. Dave and Sam came home shortly after 11 and Sam had a snack while Dave conferred with me on toys. It's both strange and depressing how long organizing such a small space can take. Sam coloured. 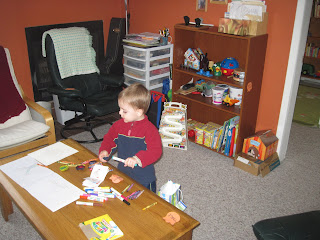 12:15pm: We were all eating lunch. Sam and Dave had sweet and sour lentils and I had soup and crackers from yesterday. I did dishes while Dave helped Sam with the rest of his lunch.

12:45pm: I put Sam down for his nap. We rocked to five Golden Slumbers songs and Sam read an "I Spy" book. Funny kid! I was tired so as Dave was leaving for his meeting, I went down for a nap at 1:11pm, knowing Rachel would likely wake up soon.

1:18pm: Rachel woke up. Ha ha ha! I brought her into bed with me to nurse and we both dozed until 2. Then I got Rachel dressed and myself a snack of cheese and crackers and my afternoon Coke. Rachel played on her play mat and I worked on pictures to print. We haven't printed pictures since the end of March and it's been a busy, picture-filled few months! 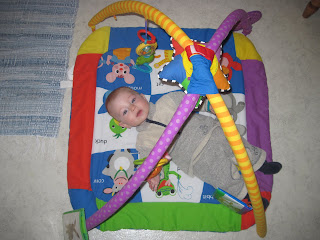 3:00pm: Rachel nursed and was hanging out in her swing and I worked on a present for my parents for Christmas. I can't say anymore about it now! :) Rachel was pretty fussy during this time and Dave didn't get home from his meeting until 3:45pm. 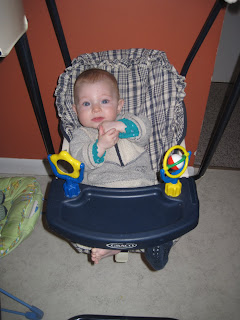 4:05pm: I woke up Sam. Sam and I earmarked (with Post-It Notes) interesting recipes in our cookbooks, which will hopefully help with monthly menu planning. At 4:45pm I nursed Rachel to sleep while Sam and Dave coloured. 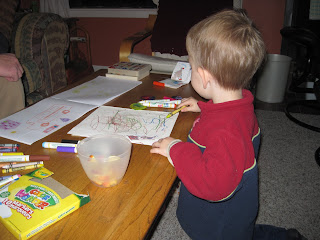 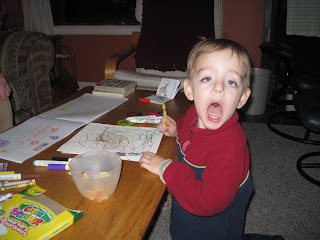 4:55pm: Sam and Dave were doing bath time and I was working on the present for my parents again. Plus making a coffeecake for tonight's Hoodluck. Hoodluck is our neighbourhood potluck which happens about once a month and is at friends' houses we can mostly walk to. Tonight's theme was Comfort Food and it was at Teresa's. Sam freaked out about being washed in his bath at about 5:05 and woke Rachel up. sigh.

5:40 We left for Hoodluck at Teresa's. It was very good food and we had a lot of fun. Kessler entertained Sam with his iPad which was awesome. Rachel got held by a lot of people -- Jenn, Teresa, Twiebe, Ghenette and Brian. 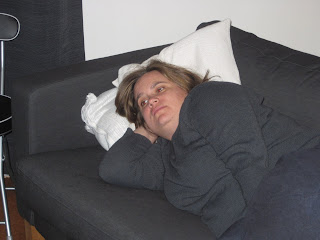 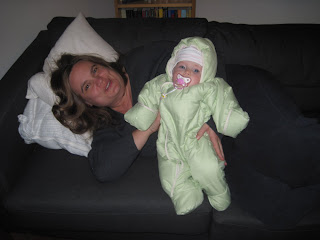 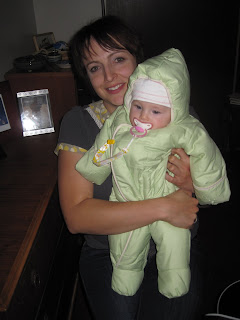 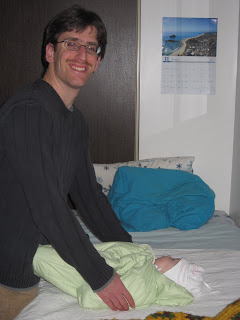 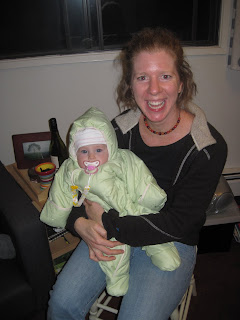 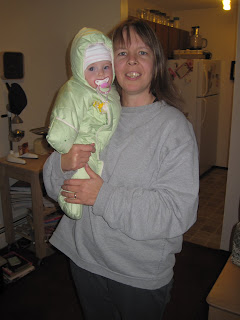 8:45pm: We arrived home from Hoodluck. I read Sam "Red is Best" and then looked for pictures on Google. I was trying to find something for Teresa but I failed. sigh. Rachel hung out on the living room floor and in her swing and Dave put Sam to bed.

9:20pm: Sam was in bed and I started changing Rachel into pajamas but Dave finished up so I could finish this blog post. Rachel has been fussy for the past while so I am going to nurse her and hopefully she falls asleep. Tomorrow is an early day so I hope she sleeps well tonight because we all need it!

It has been fun, albeit A LOT of work, to write out these days in such detail. I won't do this very often -- maybe I'll try again in another six months. But it will be good for me to be able to look back and see how we spent our days.

Stayed tuned tomorrow for another week of interesting (I hope!) but less wordy blogging!
Posted by Natasha at 00:08