Sometimes I feel like a good parent and sometimes I don't. Today a number of things came together which reaffirmed that Dave and I are actually doing a good job of this parenting-thing. I mean, you don't apply for this job -- it just gets handed to you when you think you might be ready and then you discover if you are or aren't! 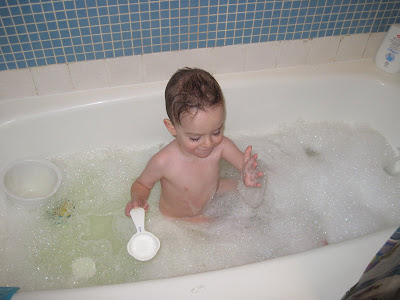 Miss Rachel had not been sleeping well the past few weeks and the main issue we were having is that she would have a "late evening nap" around 7:30 or 8:30 and then be awake within an hour and then not go down for the night until 11, or midnight, or even 1am a couple of times. So on Saturday night, in desperation, I turned to everyone's friend, Google, and tried to figure out what might be going on.

One of the suggestions was that you do a bedtime routine with stories and pajamas and put the baby down at a reasonable hour, which they suggested was between 7 and 8:30. They said that most babies got fussier and stayed awake because they were overtired when they were awake much later than that. So Dave and I realized that we were probably keeping Rachel up too late. Which you think we should have been able to figure out on our own...

So the past three nights we have put Rachel down to sleep around 8ish and when she wakes up half an hour later we let her cry it out. It's one of the hardest things I've done as a parent, and we did it with Sam too. The first night Rachel cried for 43.5 minutes and then she slept for nine and a half hours with me only feeding her once, right before I went to bed.

Last night she had two periods of crying, one for 4.5 minutes and the other for about 15 minutes. She woke up twice to nurse but at least she got more sleep. Tonight she's woken up once already but only let out a little cry and I gave her her soother and when I checked on her after five minutes she was back asleep. I feel like this bedtime thing is starting to work better for all of us. 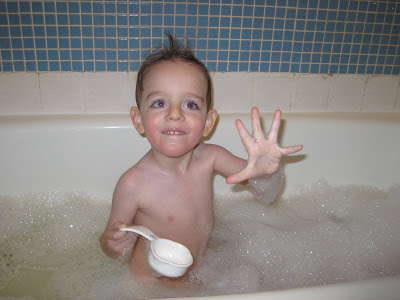 My other inspired idea was tonight when I was giving Sam his bath. He has been complaining about being washed so I've made it a race -- "Can we get you washed before I have to turn the water off?" Tonight he did super-great so I said I had a surprise for him. I dumped a bunch of dish soap in the water for him and he played for half an hour in the bubbles. Sam loved it and Dave and I got dishes done. Yay for inspired ideas! 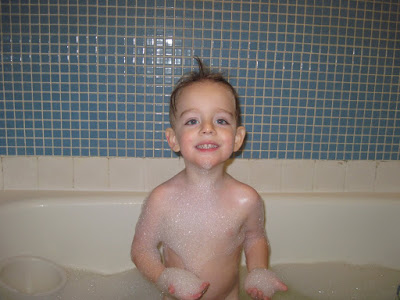 So that's how we've been doing with parenting lately. It's been a good thing!
Posted by Natasha at 23:20