What We've Done Today -- For Dave

So as I mentioned last night Dave left early this morning for a work trip to London, Ontario for a week so we were on our own today. I had made plans to go to church with Marcia and Jenelle today so this morning that's what we did. Sam and Rachel both went to the nursery and I was totally waiting for Rachel's number to pop up on screen saying, "Come and get your screaming child!" but it never did. Marcia's number popped up because Gavin had pooped and she said Rachel was just sitting in the exersaucer looking around. That child is an extrovert.

After the service Sam, Olivia and Kelsey were playing ring-around-the-rosie and it was soooo cute. Unfortunately I never got a good picture so you'll just have to imagine it.

After church we stopped at Costco! Sam was looking into the sun so this picture isn't the greatest. 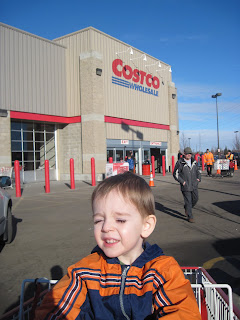 We walked in and there were tons of samples so I just decided that Sam could have lunch there on all the samples! Ha ha ha! Actually he ate pretty well -- everything from dried coconut and mango to chicken penne pasta and yogurt and sausage and Mexican squash. And just as we walked in the door they had a rack of summer dresses so I had to buy one for Rachel. I couldn't decided between two so I gave Sam the choice and he picked the one below. I love that it has the pink gingham as accent and little underwear to go with it. Miss Rachel will be soooo cute in this dress. 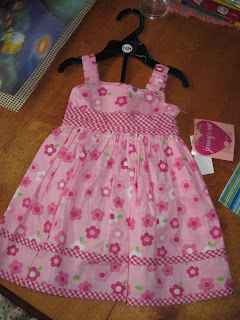 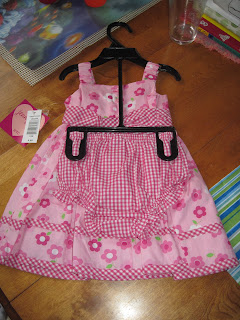 And then I stopped at the sleepers and found this one. And it is also adorable so I had to get it too! And I also got some of what I actually went to Costco for -- shrimp and snap peas and Kleenex and such :) 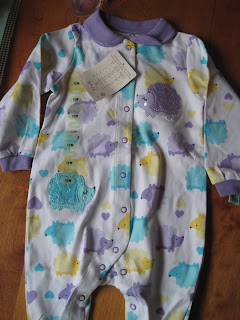 Sam didn't nap this afternoon but spent about two hours in his crib having (somewhat) quiet time. And Rachel napped and I talked to Sheri and Dave. Then Tash came over! Yay!

She put Sam in a pull-up and he peed on the potty and tried to pee a few more times. I got dishes done and laundry folded (and mostly put away) and supper made so that felt good. 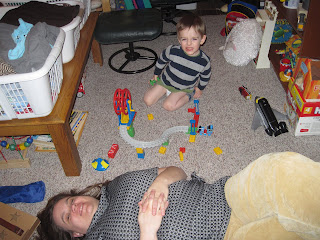 Tash played with Sam and fed Rachel and generally helped me gain some sanity. 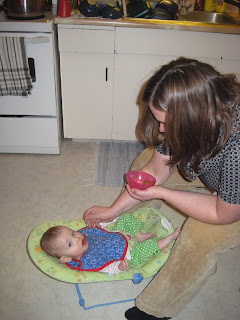 And Sam wanted me to take a picture of his "special face for Daddy!" I hope you feel special Dave :) 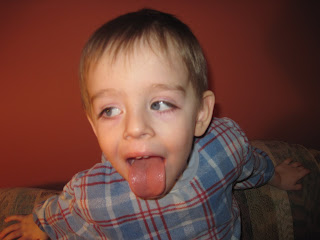 And now both kids are in bed, Rachel is asleep, Sam might be asleep (he SHOULD be asleep because he didn't nap this afternoon) and I am going to bed soon because below is my list of things to do tomorrow before my parents come. Oh my. 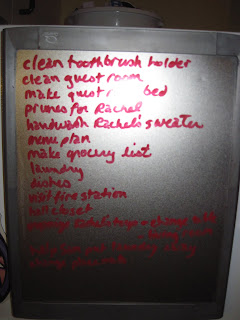