First of all, I asked Dave what to call this post and he came up with the title so don't blame me! Second of all, it actually describes our weekend pretty well, especially when compared to the last two weekends where Dave was gone for at least part of them.

Ironically, none of these photos actually show our whole family together but that is really how we've spent most of the weekend. Except for a couple of naps (on my part!) and a mom's night out (also on my part!), but that's how I get a break from being a stay-at-home mom and it's given Dave and the kids a lot of time together.

The weekend is probably best described in pictures, although we have no pictures from Saturday when we wanted to go to Cafe O Play but the waiting list was too long so we went to Alliah's library and got a bunch of good books, Dave got a haircut while I read some of the good books to Sam and Rachel and then we went to SuperStore and got smoothies, some awesome rain boots for Sam and a few other things we needed. 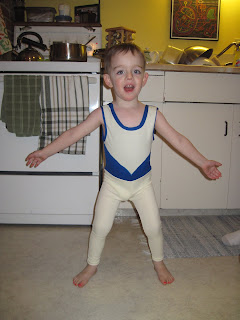 The first few pictures are actually from Friday. Here is Sam modelling the gymnastics outfit Auntie Jenelle made for him. 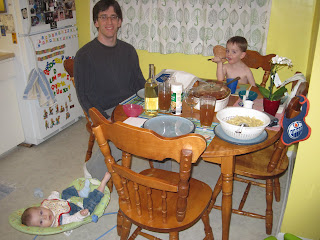 We started the weekend off on a good relaxing note by having Shabbat dinner together. It was Tofu CatchATory! I don't know why Sam is not wearing a shirt for dinner. I guess we were in "informal mode" already :) 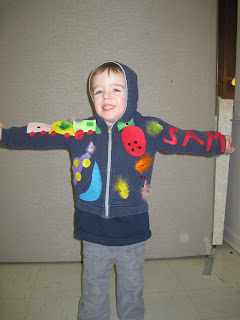 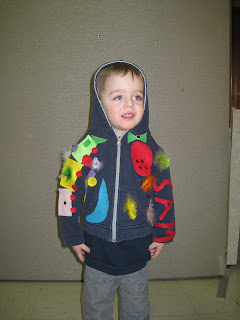 Sunday we went to Temple Tykes at TBO. We read the story of Joseph and then the kids each made a Coat of Many Colours. Here is Sam modelling his. Sam had a lot of ideas for his coat including a train, a car and his name on it. He has really enjoyed wearing it! 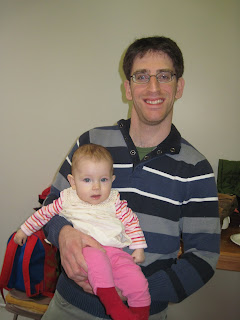 Although Rachel did not make a coat of many colours, she was actually dressed quite colourfully and she and Dave made a stripey pair. 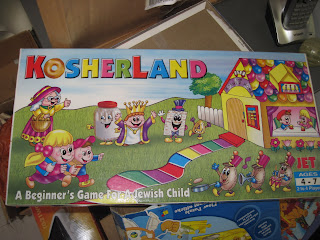 Dave here, jumping in to explain the above board game. This is "Kosherland", a take-off on Candyland based around the Jewish dietary laws. I, like many others, have fond memories of playing Candyland as a kid -- finding cards for root beer floats, gingerbread men, and making my way to the peanut brittle house. Kosherland, unfortunately, would have none of this kid appeal. The foods that you need to find are either tasteless (the matzah, which is wearing a top hat for some reason), oily (the latke marching band in the foreground), or gelatinous (the jar of gefilte fish standing beside the king).

This is not to say that these foods don't have a certain, acquired-taste kind of appeal, but candy they are not. The whole idea behind the kosher laws is to create faith-oriented restrictions around what you can eat (and when), and the end result tends to be food that is a pale, inferior imitation of its non-kosher equivalent. So, in short, I feel sorry for any Jewish kids who, in addition to dealing with a diet of kosher food, must also make do with this unappealing, but gastronomic/theologically appropriate version of its trief (non-kosher) cousin. 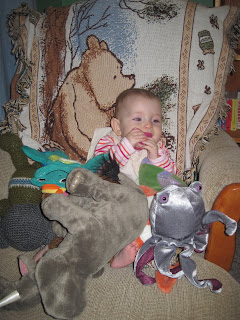 It's bedding change time for the entire family this weekend and here is Rachel buried among Sam's stuffed animals while his sheets were being changed. I joked that she was like ET when he was hidden among the stuffed animals in the closet. Do you see her above? 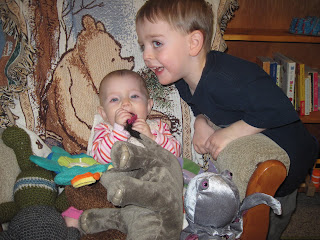 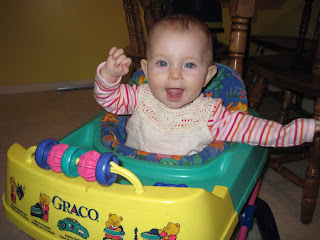 Rachel hung out in her exersaucer while Sam and I shoveled snow and Dave made supper. Rachel has become a big poser when it comes to taking her picture and it makes me laugh :) 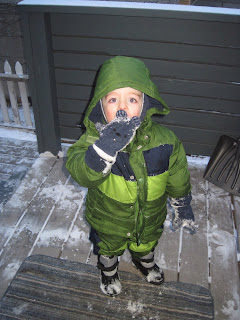 Sam did not want to come in when we were done shoveling, so he played outside on his own for about fifteen minutes. He did a good job of staying where we could see him and it's nice to get a glimpse into our lives in about four years when Sam and Rachel will play outside on their own while Dave and I stay inside! 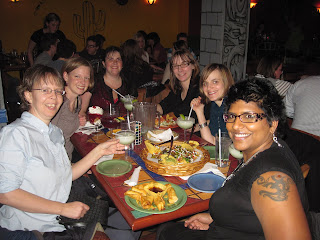 I mentioned above that I got to have a Mom's night out. It was a ton of fun and I am so going to miss these women when we move :( As Marcia was paying the server asked her where we were going next. I said, "I bet he didn't guess home to nurse our babies!" (And I'm wearing my glasses because I have a very sore left eye and since all the medi-clinics want to charge me to check it out (because I am out-of-province health care) so I am waiting until I can go to the University Health Clinic to have it looked at. And wearing my contacts make it more irritated. sigh.) 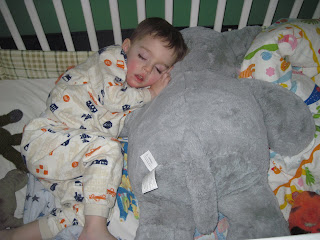 I always check on Sam before I go to bed and I always make Dave come and look at how Sam is sleeping because it is so cute. When I got home from my night out, Dave said, "I would not require you to go see how Sam is sleeping but if you wanted to it would be worth it." And it totally was. I had to take a picture because I loved seeing Sam all curled up with Big Elephant, as he calls it. 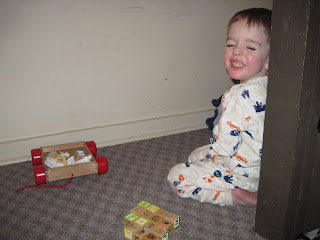 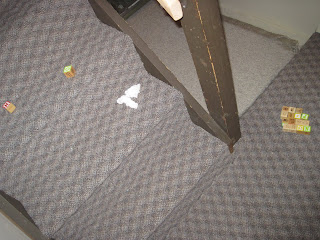 And these are just random pictures of Sam playing. I love how self-entertaining he is. He has been playing downstairs for about half an hour now and all he has is his wagon of blocks and some Kleenex. At one point he had all his blocks lined up on the baseboard and it was so cute! (In fact, they are still there.)

Okay we're heading back to our Family Day weekend of Family Together-ness. It's been great so far and I hope yours has been too!