On Monday, Dave and I celebrated our seventh anniversary. Thankfully our friends kept our kids for twenty-four hours this weekend so we could celebrate because on Monday Dave had to go to work and I took Rachel to swimming. In the evening we watched Willem play soccer. It was just like our wedding day! Ha.

We went out for a really yummy supper on Friday night to Ennio's, an Italian restaurant. We had a gift card so we went all out with drinks and an appetizer of escargots, my favourite. And then we got main courses! Sadly, we were too full for dessert. 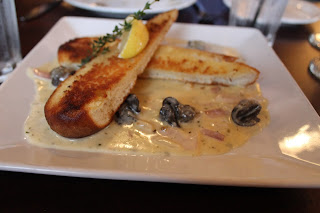 But on Saturday, after it rained (a lot) on our canoeing plans, we decided to go indoor rock climbing. We went to Grand River Rocks and I would highly recommend it.

I've been thinking about it, and rock climbing (in my very limited experience) is a lot like marriage. In a nutshell, it seems like it's going to be a lot of fun, but the reality is that it's hard work, it's slightly terrifying, you can reach great heights (but you have to be willing to give some things up to get there), and at the end of it all, you're in it together. 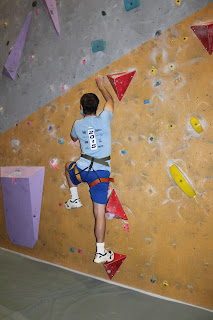 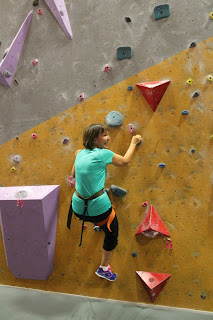 Our options for climbing were doing boulders or using the auto-belays to scale greater heights. We tried the boulder in the second, quieter room, and this was about as far as we got. Discouraged, we walked away. Then an employee informed us that this boulder was still set up from an advanced rock climbing competition. We then felt better about our lack of success! 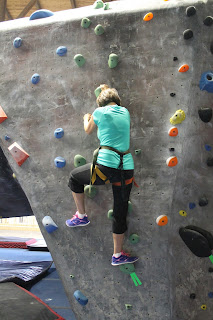 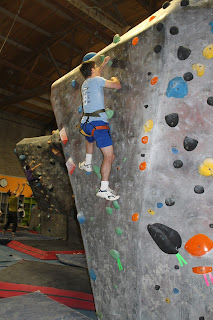 Then we attempted the other boulder and had much more success. Although since we weren't attached to anything, it was a little scary. Then we decided to try to climb to greater heights with the auto-belays.

This was really terrifying for me. Going up wasn't so bad, it was the letting go of everything (after all your instincts had been saying, "Don't let go!"), and trusting the rope to gently lower us to the ground. After gradually working up to greater heights (the first time I tested the auto-belay I was maybe three feet off the ground!), I decided that I was DONE with rock climbing. So I watched Dave attempt a higher climb. 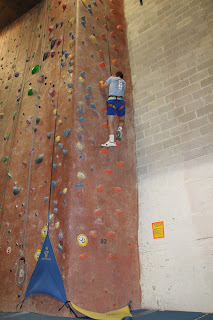 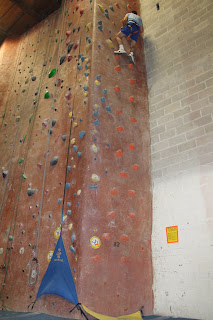 Since we had day passes, we took the kids back in the evening so they could watch us climb a bit. Yes, they potentially could have climbed (supposedly three year olds have done this!), but we decided not to attempt that yet.

I actually tried a few more climbs and got a little braver with letting go at the top, but it was still hard.

The next day both Dave and I were so sore that Dave declared, "Next year for our anniversary, we're playing shuffleboard!" I may have been sore enough to agree with him. Funnily, we were both sore in different ways. Dave's wrists bothered him the most, where as my chest muscles had me in agony.

So as of today, Dave and I have been married for seven years and two days. And it's been quite the ride.

The "two days" in the title also refers to the two days (and two nights) that Sam spent at camp earlier this week. He went with a really good friend, and knew almost all of the kids in his cabin, so he had a really good time. He's already talking about just living at camp for all of next summer! Ha! 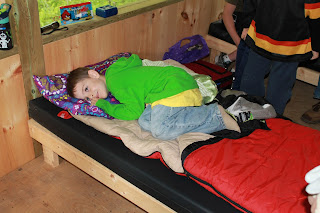 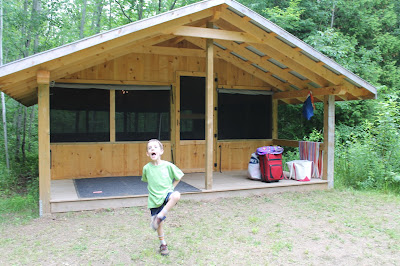 So it's been an exciting few days around here. Today is Canada Day and we are celebrating by getting our roof replaced. I keep telling myself that the stomping around and pounding I'm hearing is angels ensuring it will no longer rain in our playroom. It's sort of keeping me from going insane :) Sort of.
Posted by Natasha at 10:04