End Of The Alphabet

Unlike last weekend, when I could do an entire alphabet retrospective, this weekend we spent a lot of time on the end of the alphabet -- VBS, Walking, and Yardwork.

V is for VBS. There isn't much to report on VBS except that it starts today, so I spent a lot of yesterday getting ready for it. (And dragging my family along!) I am leading Science and Snack for 41 4 and 5 year olds in four different groups. Our theme this year is "Message Received: Hearing God's Call" so all my science experiments revolve around sound. Please pray that I have the energy to keep up my enthusiasm for each group for the whole week and that it all goes well.

Rachel gets to go in her own group this year, for the first time ever. I am both excited, and a little nervous, for her. I think she will LOVE it and that it will go great. I don't know for sure though and that's the nerve-making part.

W is for Walking. Since Dave and I both have FitBits, and the evenings are gorgeous, we decided to fit some walking in this weekend. And since the kids are eagerly preparing for their "KidBits" (which FitBit has yet to invent, and sadly, after some e-mail correspondence, I found out they won't be able to invent until privacy laws change), they were super excited about walking too. 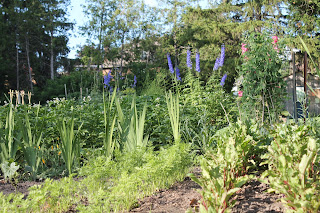 We watered our friends' garden, we did some errands, we took our kids to The Beer Store where they were handing out free samples (the kids got pretzels and were thrilled), and then we took the long way home. 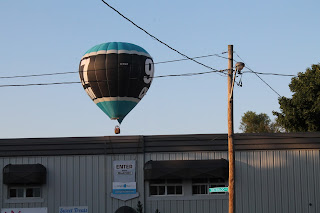 On Friday evening, as we were getting home, we saw a balloon landing and chased it all the way down. We got to watch it deflate which was pretty cool. 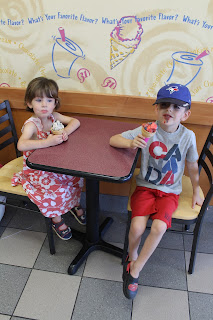 On Saturday, our evening walk may have been inspired by the fact that we were out of milk and bread, but we decided to add some ice cream fun to the night!

Y is for Yard work. Since we had a "free" weekend (no plans), we decided to attack our yard. My (ambitious, as I discovered) list had 9 items on it, with one sub-item, which I figured we could knock out in a day. Yeah, over the course of the entire weekend, we got two things and two half things done, if you don't count the clean up left from one item.

One project I was really excited about was restringing our clothesline. Last year, at some point, our clothesline broke, and I didn't have enough line to completely fix it so I did a hack job and basically had three (and kind of a half) lines to work with. So we bought new clothesline a month ago, and had just been waiting for a weekend to fix it. Now I have FOUR FULL LINES again and am in laundry-hanging heaven!

However, that also meant that we had to trim away half the bush behind the clothesline, and then I decided to give that flower bed some love. 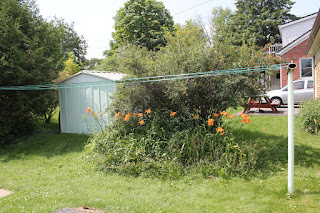 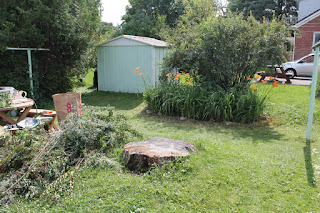 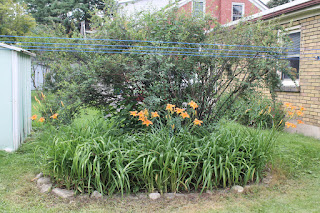 Dave's main job was to deal with the hedge beside our raised beds. He really had the nastiest job of the weekend since this hedge is covered in thorns. His work was punctuated by cries of "Owww!" He also sustained two awful slivers in the undertaking. 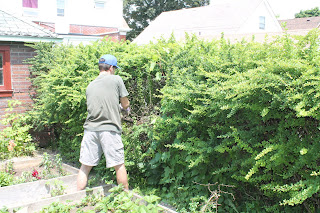 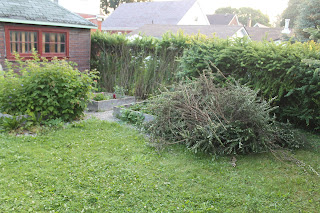 Unfortunately for Dave, his task is not yet complete. He has to finish cutting up that pile for yard waste and he has the other half of the hedge to trim.
I then spent some time dealing with the bed behind our playroom. Sadly, it hasn't rained in awhile and the ground was really hard, so I gave up and, once it rains, I will finish weeding it. Thankfully, all the big weeds came out quite easily, so it looks much better already. 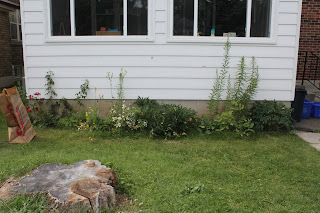 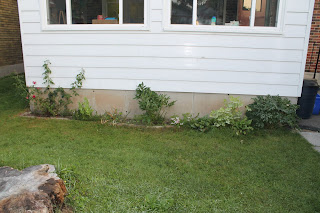 And that, besides being way more pictures of our yard than you ever needed to see, was our "end of the alphabet" weekend -- VBS, Walking, and Yardwork.
Posted by Natasha at 08:19