Halfway Through The Year?!?!

2015 is half over. Already?! Yikes. Well, let's see how my resolutions did this month.

I didn't get a book review done this month. It's not that I didn't read some good books, but processing taking on a job took up a lot of my thinking space. Out of all the books I read though I would highly recommend The Book Of Negros and The Nurses. Neither of these books have been willing to let me go easily.

Roasted Butternut Squash Enchilada Casserole -- Well, if you count the fact that I substituted all the peppers for a red pepper and didn't add the cilantro and used plain tortillas, then I made this recipe. And It. Was. Awesome!!! I found it on Erika's Pinterest board, which is how I've found some of my best recipes -- my friends' Pinterest boards. Anyways, Dave and I LOVED it, Rachel gleefully ate an entire bowl (after I maybe lied to her and said she loved squash as a baby. Well maybe she did... I can't exactly remember...) and Sam basically ignored it. And Rachel has been asking when we're having it again so I call that a success. Plus all the roasted vegetables were really pretty. 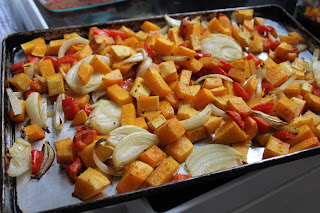 Chickpea Avocado Mash -- This was a good way to use up a (very) ripe avocado. To be honest, it wasn't as good as I thought it might be but Sam devoured it (he ate like three huge helpings) so I will definitely be making this one again. It's a good way to send protein with Sam for his lunch.

Packets of Sausage, Peppers, and Potatoes -- I kept this recipe, for some reason, when I was still getting Today's Parent magazine. The nice thing about it was that it was super easy to prepare. I was half dead from a cold that day and still managed to "make supper." However, I should have known the kids wouldn't like it; they don't eat potatoes if they aren't in French Fry form. And while it was good, I'm not sure I need a recipe to make dinner in a foil packet. Plus at the end I had all this extra fresh thyme that I didn't know what to do with. (That's code for "it ended up rotting in my crisper drawer.")

Earl Grey Tea Cake With Blueberry Cream Cheese Frosting -- I think this might have been one of the first things I pinned on Pinterest lo, so many years ago. So I finally decided to make it. It. Was. Amazing!!! If, as the one who baked it, I can say that. I used white flour instead of whole wheat and just used our immersion blender to smush up some plain old frozen blueberries (because who has freeze dried blueberries on hand?!?), and I think this is my new favourite dessert. I loved how much it tasted like Earl Grey tea. I made it for book club and about half the people had seconds and there were only two pieces leftover. If you like Earl Grey tea, if you like cream cheese frosting, if you like dessert -- make this cake. 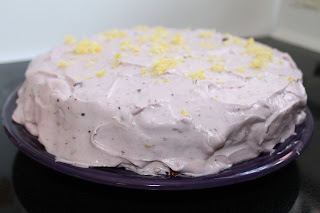 What day am I at with Bible reading?

Surprise of all surprises, I actually did do some Bible reading this month. I got from February 13 to February 23. And I've come up with a new way to be accountable with a IRL (in real life) friend so that hopefully this goal will continue to improve. I did start doing some Bible reading in that dead zone time when supper is cooking and the kids are (usually) watching a video and that seemed to help.

How many days did I drink enough water?

I didn't actually track this really well but I do know that I was a lot better about drinking more water this month because I remember thinking the day of Rachel's party, "I need to drink more water because I haven't had a lot today." For some reason, I drink a lot of caffeine to get me through birthday party prep and hosting :)

What percentage of Sam's lunches were made at night?

I think one or two of Sam's lunches were made in the morning. For some reason, I was extra tired this month so a HUGE shout out to Dave who often did Sam's lunch dishes and made his lunch after I was in bed.

Where are we at in Canada?
Running:
Bun baking:

I grouped the above three together because I made no progress on these goals in June. Let's just say that between Rachel's birthday, Father's Day, end of school for Sam, and our anniversary, plus processing the changes my new job will bring to our lives, there wasn't a lot of time for anything else.

Oh house cleaning -- I need some motivation to tackle you properly again. Of course, who wants to stay inside and clean when the days were gorgeous and there was yard work to be done? Not me, which is why the state of our house suffered in June.

I got my blood donation out of the way early, and successfully donated on the first of June! Since I can only donate every 56 days I'm not scheduled again until July 27 but I've now donated two times this year which is awesome!

I had such high hopes for June in terms of getting on top of my resolutions again and it felt like most of them went off the rails. I am a little concerned about how these resolutions will fare now that I am adding a job into the mix. Honestly when I have some free time, I think I will much prefer to hang out with Dave, Sam, and Rachel, visit with friends, or read a book rather than going for a run or cleaning the house. I will have to see if I can find some extra motivation.

Working mom friends -- how do you get it all done? I'd love to hear your suggestions.