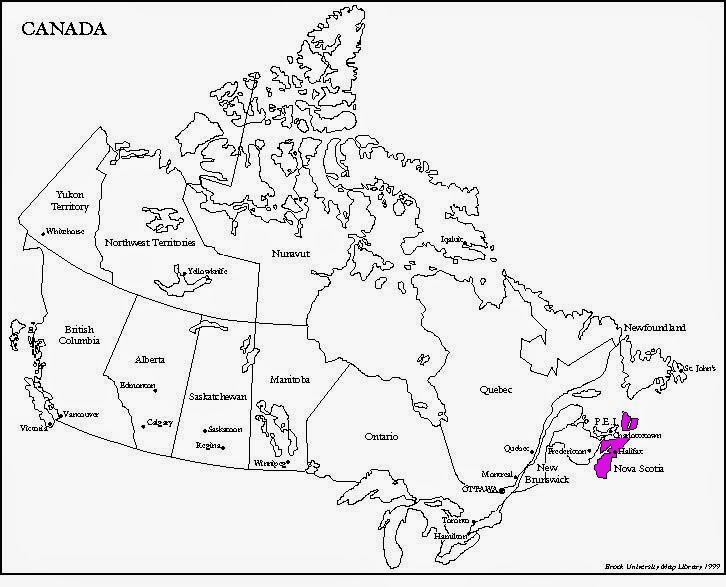 If Newfoundland has its roots in Ireland and England, then Nova Scotia has its roots in Scotland. Nova Scotia is the heart of Canada’s maritime region. I have only been there once, very briefly, and look forward to the day I can go back again. Nova Scotia is practically an island, connected to New Brunswick by only 23 kilometres (14 miles) of land. When you are in Nova Scotia, you are never further than an hour from the sea. It is connected by a causeway to its largest island, Cape Breton, but there are over 3,800 other smaller islands which make up this province.

The Bay of Fundy divides Nova Scotia and New Brunswick and the highest recorded tides in the world, sixteen metres (forty eight feet), are found here. But Nova Scotia isn’t all sea and shore. It also has uplands with forests which are home to bear, moose, and porcupines. The weather is similar to Newfoundland with fog and cooler summers, especially near the coast. 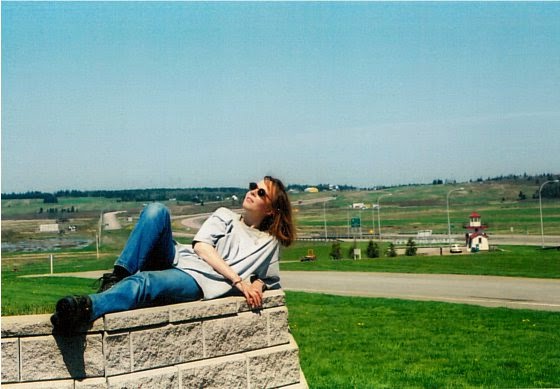 me being silly at a tourist information stop
Nova Scotia’s first inhabitants can be traced back to 11,000 years ago. Eventually, the people became the Mi’kmaq First Nation. The first Europeans to visit this province arrived about 1,000 years ago. And then in 1497 John Cabot claimed the land for England. However in 1534 Jacques Cartier claimed it for France.

Eventually the French settlers had a colony called l’Acadie and Scottish settlers came and established a colony called Nova Scotia, Latin for “New Scotland.” Between 1604 and 1710, control of Nova Scotia passed back and forth between the French and the English nine times. By 1713 all of it, except for Cape Breton, was under English control. Unfortunately in 1755, the Acadians were deported after they refused to sign an oath of loyalty to England. 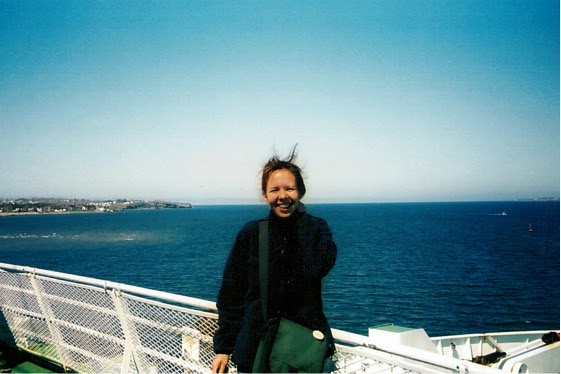 me on the ferry leaving Nova Scotia
Many immigrants landed in Halifax at Pier 21, and then began their journey further into Canada. My Grandma Krahn remembers landing in Halifax, on her way from Russia to Saskatchewan. Unfortunately, on December 6, 1917, two ships collided in Halifax’s harbour, which started a fire on one of the ships. The ship was carrying explosives and the ensuing blast destroyed most of the city. Over 2,000 people lost their lives and another 9,000 were injured. It remains the biggest man-made disaster in Canadian history.

Cape Breton Island is a piece of culture unto itself. It has highlands in the northern part of the island, and the Cabot Trail runs along the coastal cliffs. Many of its inhabitants have Scottish roots and you can often find a cielidh or a kitchen party in the rural areas. 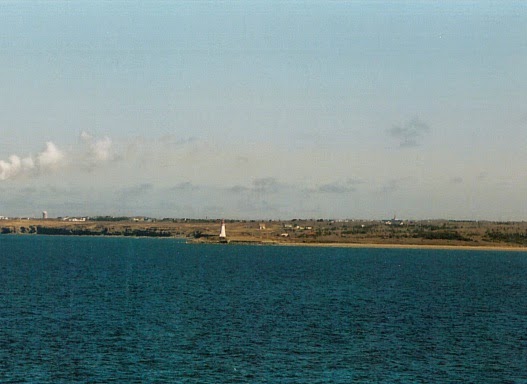 Interesting Facts:
Nova Scotia’s most famous schooner, the Bluenose, won the International Fisherman’s Trophy as fastest ship in 1921, 1922, and 1923. It is featured on Canada’s dime.

Anne Murray, Sarah McLachlan, and Holly Cole all come from Nova Scotia, as do fiddlers Ashley MacIsaac and Natalie MacMaster. One of Dave’s favourite musicians, Stan Rogers, has roots in Nova Scotia. He sings folk music, and is still quite popular despite the fact that he died in a plane crash over thirty years ago.

The lighthouse at Peggy’s Cove is a world famous icon. It is also has the only post office in a lighthouse in North America.

Note to readers: When I visited Nova Scotia I wasn’t as crazy about taking pictures as I am today. I am assuming that all these pictures were taken in Nova Scotia, but they could also be New Brunswick, Prince Edward Island, or Newfoundland. Like I said, I can’t wait to go back and visit this province, this time making some memories I will actually remember :)