A long time ago (November 2010 to be precise), in a land far away (Edmonton!), there was a 20 month old named Sam. One night his mommy and daddy decided to get him a potty. They didn't think toilet training would go very quickly but they did hope that it would happen eventually. At first Sam didn't know what this new potty was for. 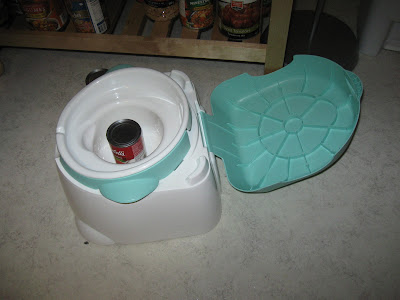 But eventually he realized it was to sit on. Which he learned how to do. He would sit and sit and sit and one day he peed! His mommy was so excited she screamed which scared Sam and it took awhile before he wanted to pee on the potty again. 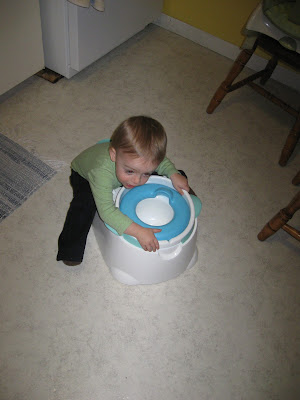 And since that time Sam has used the potty off again and on again. Two summers ago he used the potty for a whole day at Oma and Opa's and there was much rejoicing. 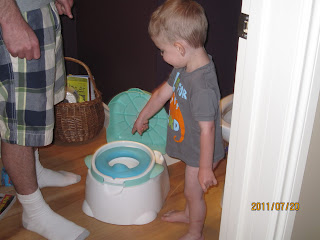 His mommy even put him in underwear a few days this past summer but that was a bit of a disaster. After three clothes changes in three hours his mommy decided she had had enough. So except for peeing on the potty once in awhile there was not much happening in the getting-rid-of-diapers department. And Sam decided he didn't even want diaper changes so everything was becoming a big fight. But then... oh, but then...

For Christmas Oma and Opa gave Sam's family an iPad mini and Sam's mommy declared 2013 to be The Year of the Potty. So now Sam sits on the potty and has iPad time. And in the last week Sam has pooped on the potty THREE times!!!!! And Sam happily sits on the potty, playing on the iPad (or the iPood* as it shall now be known in our house) and poops and pees and wears Pull-ups. And for these great feats he gets one chocolate and one chip which he eats together and calls "chocolate chips." And three times this week (THREE!!!) he has gotten four chocolates and four chips, because, well, let's just say that bigger accomplishments deserve bigger rewards :) 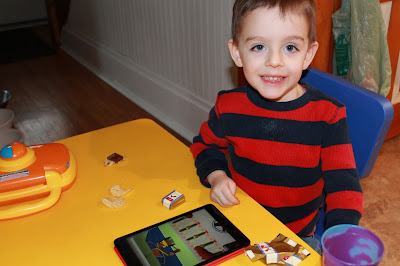 And Sam's mommy is starting to believe that there may be a light at the end of the never-ending diaper changing tunnel and that she will live happily ever after. Someday.

*I know I am not the first person to call an iPad an iPood but I have no idea who to credit. Except for my parents who had the genius brainwave to bring this miracle-bringing device into our house. The pros far outweigh the cons (Sam managing to post random things to my Facebook account and Dave and I never getting any time on it!)
Posted by Natasha at 12:45