Houston, We Have A Problem! 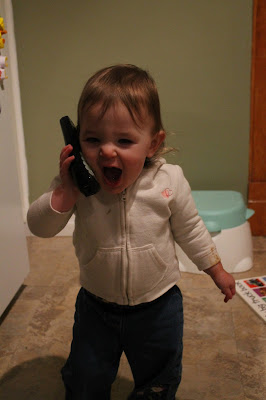 Miss Rachel has decided that whenever one of us is talking on the phone she also needs to be talking on the phone. Sometimes it is pretty cute. Other times -- um, not so much. Like last night, for instance. We were trying to talk to my parents. Rachel was yelling so much, and getting so mad, about not having a phone, Dave finally gave her his. Then she pressed buttons (so that they loudly beeped) and talked into the phone with great enthusiasm. And we do have a battery-less real phone we've given her but she's too smart to fall for that trick because it doesn't make any noise. She's a smarty-pants, she is.

In an attempt to have a better conversation we then tried to Facetime with my parents. Well Miss Rachel just grabbed the iPad and carried it around, trying to swipe my parents off the screen. As Mom and Dad were mostly just getting a view of the ceiling we gave up on that too.

I think next time we're just going to try carrier pigeon. I don't think Rachel will be able to interfere with THAT form of communication. Although she does grab pens when we're trying to write. sigh. 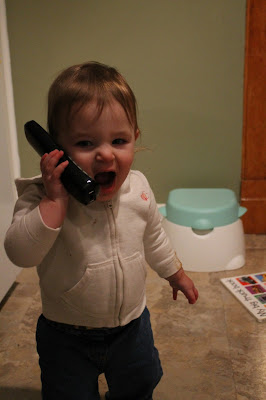