I know this isn't a movie but I figured I would give you a preview of some posts which are coming up once I have a chance (and literally get a chance) to breathe.

I was only home and awake and able to blog for about three hours on Saturday and it was three hours when our internet was being sketchy and I couldn't really connect. Then yesterday I was only home for an hour between 9am and 9:30pm so I couldn't really blog then either. And today we have errands to do, some needing to be done in a timely fashion, so it will have to be later today when this old blog gets some attention (and posts!).

So here's what's coming up for your entertainment -- seventeen people "playing" lacrosse! Yes please! Two birthday parties in one day! Sam is officially three and a half! Hymn of the week. Is my parenting style more French or American? How awesome is our boulevard looking these days? And maybe some other random junk thrown in there for good measure :)

So until later friends.

ps. this post is basically to let you all know that, despite having the cold to end all colds, I'm still alive and kicking. And trying to breathe. 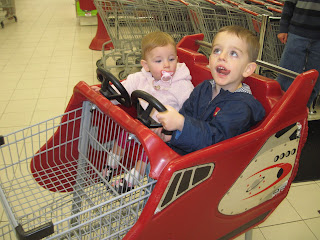 This is a random picture of Sam and Rachel in a car cart at Canadian Tire last week. Basically this is Sam's idea of heaven and my idea of hysterically funny as Sam and Rachel madly "drive" the cart the entire time. It's a good thing they (we/society) don't let kids behind the wheel until they're about sixteen. It's self-preservation folks :)