This morning started out with some extra Hallowe'en fun as I was awakened out of a sound sleep by the piercing sound of our smoke detector going off. I raced downstairs to see Dave's toast burning in the toaster oven. After some hurried conversation, we tried to smother the fire with a towel. Once the towel started smoldering we abandoned that plan and tossed water at the flames, hopeful that would do the trick. Thankfully it did. Then we had the awesome process of airing out the house. That process, by the way, is still IN progress. Urgks :(

Fortunately the rest of the day was smoother. Since Sam had missed preschool on Friday, I wasn't sure if his class was allowed to wear costumes today or not. I knew that they weren't having a Hallowe'en party but I just couldn't imagine a preschool class not wearing their costumes on Hallowe'en so I brought his costume along just in case. Thankfully I did because the kids were allowed to wear their costumes and Sam would have been the only kid without one. Sam and his classmates were all so cute! Here is Sam with some of his friends: 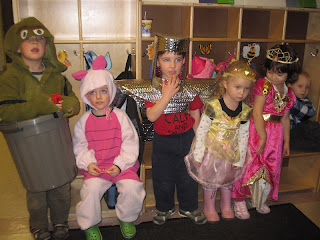 After school was over it was time to head to Dave's work. Kids of employees were invited to trick or treat in the office from 4 until 5, which I just thought was such a cool idea! And since it was raining outside, it was the driest and most relaxed trick or treating of the day. 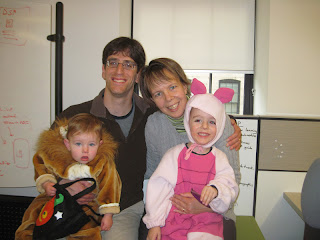 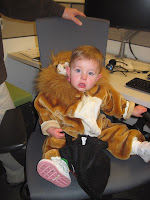 After a quick supper at McDonald's we headed over to the Hedricks to check out each other's costumes. Tessa was a unique spider witch and Willem was a spider. 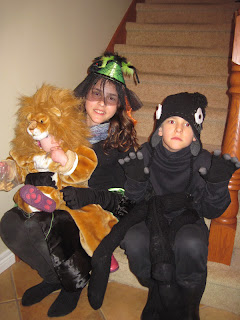 Sam was standing off to the side when we took this picture, but you can see him below in the mob of kids about to go trick or treating together. They are all friends of Willem and Tessa's from school. We would have joined them for a few houses but we had to get to our next engagement. 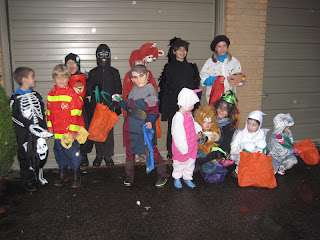 We were excited to join Caleb, Nathan, Karen and Andrew for some trick or treating in their neighbourhood. We went to about ten or fifteen houses and that was good enough for all of us.
Caleb was Bob the Builder and Sam was Piglet and they kept calling each other "Bob" and "Piglet" all night. "Bob, I want to hold your hand." "Piglet I don't feel like holding your hand right now." It was so sweet and funny! After that we went to Wes and Shirley's on our way home and that was it for trick or treating. We now have a smelly house, lots of candy, and two sleeping, happy kids. Now I'm off to eat some chocolate!
Posted by Natasha at 23:35