Am I French?: Part the Second 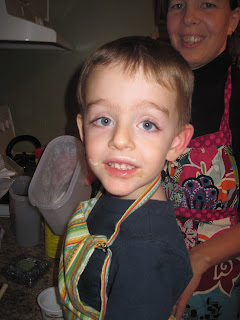 (This is a continuation of my thoughts about parenting, kick-started by reading the book, "Bringing Up Bebe: One American Mother Discovers the Wisdom of French Parenting" by Pamela Druckerman. For Part 1 see yesterday's post. Part 3 is coming tomorrow.)

However, there were things which really resonated with me. I think helicopter-parenting is bad for kids. I love the idea of teaching 'waiting' to kids. They can't always get what they want when they want it. "Having kids who can wait makes family life more pleasant." (p 60) and "French parents don't worry that they're going to damage their kids by frustrating them. To the contrary, they think that their kids will be damaged if they can't cope with frustration." (p 73) I make my kids play on their own a lot. I always have. I am not their full-time entertainer and sometimes I have felt guilty about that. The French approach really validates this aspect of my parenting. "[French parents] don't explicitly teach their kids distraction techniques. Mostly, they just seem to give them lots of opportunities to practice waiting." (p 62). And because I have let my kids play on their own a lot I may have inadvertently allowed them to learn to wait. Sam has quiet time in his room for about two hours every day, whether he is asleep or not. And he stays there. It is possible that it is his temperament but it is also possible I taught him to do that by allowing him to play on his own. 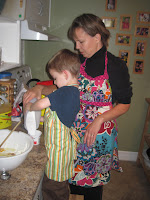 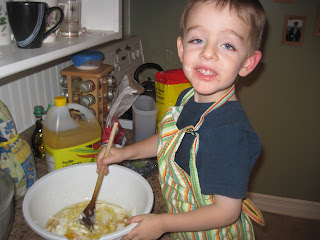 (At this point I should explain that French parents bake with their children from a very young age and that the author points out that baking is a way to teach patience. At the end of her chapter on waiting she provides the recipe that most French kids learn first, a yogurt cake. I call it a "Container Cake" because everything is measured using the empty yogurt containers. This is the cake Sam and I baked this past weekend and the pictures depict our baking process. Although French kids bake this cake by themselves, since it was Sam's first time I provided some help. I am hoping eventually that he will be able to make this cake on his own. We shall see...!) 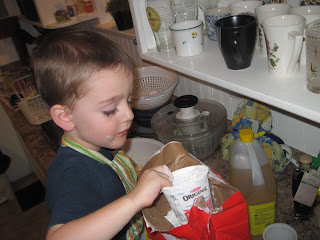 I also really like the French view on food, possibly because it really resonates with my own ideas! I refuse to cook separate meals for my kids. I just don't want to get into that pattern. So our kids have always eaten what we eat -- lentils, tofu, lots of vegetables, and so on."The reigning view in America seems to be that kids have finicky, limited palates, and that adults who venture beyond grilled cheese do so at their peril. This belief is, of course, self-fulfilling." (p 198). We've practically stopped ordering off the kids' menu for our kids because it's not worth it and they will just eat off of our plates. Not to say that we never hit McDonald's or other places. 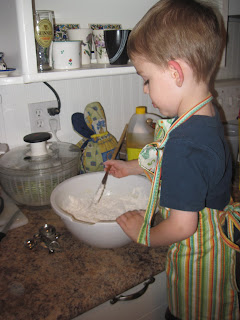 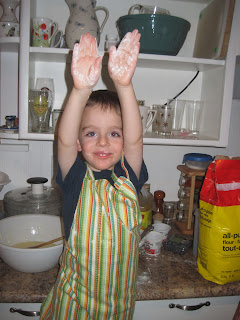 Often, people will ask, "What do Sam and Rachel eat?" when we are going to their place for dinner and I'll just say, "Whatever you are serving." Ideally nothing too spicy but other than that, go nuts. This is not to say that Sam always eats well, but he always eats. Sam doesn't really like potatoes or mushrooms but we will let him eat around them. And we do try to get him to eat at least one bite of everything. Not to say that we succeed, but we try! "And there are plenty of finicky French three-year-olds. But these children don't get to exclude whole categories of textures, colors and nutrients just because they want to." (p 200) This last sentences just sums up my thoughts on food perfectly. And that is not to say I eat everything, but I do try to eat a wide variety of things and keep our kids eating that way too. 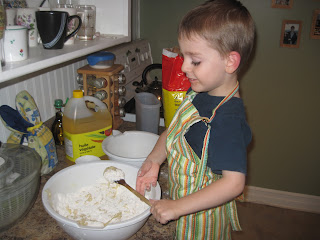 I also am not really a snack person. I bring snacks to church because my kids see other people eating them and want their own. Other than that though, we don't do snacks throughout the day. And for the most part this works for our kids. This also seems to fit with French philosophy. "My kids come to the table hungry because, except for the gouter (afternoon snack), they don't snack." (p 216). French kids get an afternoon snack because supper doesn't happen until around 7 or 8. Since we eat supper around 6, I try not to do any kind of snack. I often feel guilty about not giving my kids snacks but now I can just say "I'm French" and eliminate that guilt. Yay :) 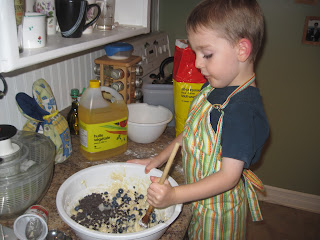 This may seem similar to the "waiting" I mentioned above but I also loved the idea that even though we're mothers, we're also people. "I'm also struck by the nearly universal assumption that even good mothers aren't at the constant service of their children, and that there's no reason to feel bad about that." (p 130). Now if only I could eliminate my guilt about that too! I do engage with my kids but there are also times I just need time for me, even if my kids are around. "The standard for how much middle-class mothers should engage with their kids seems to have risen." (p 139). And if you don't fit in with that standard it is really hard to convince yourself that it's okay. At least, that's what I find. "What really fortifies Frenchwomen against guilt is their conviction that it's unhealthy for mothers and children to spend all their time together." (p 146). I just need to embrace this conviction more whole-heartedly I guess :)
Posted by Natasha at 09:53