Day In The Life -- Friday

Today did not turn out as planned. I was supposed to go to my aunt's and visit with my cousin Katherine and her daughter Clara but Sam woke up coughing and Rachel had a runny nose, so we cancelled. And with Sam's coughing I decided sending him to school this afternoon might not be the best idea so instead of having an out-and-about Friday, we had a stay-at-home day instead.

I woke up at 8 to Sam's coughing. He woke up Rachel, as I still thought we might be going to my aunt's and then we all had breakfast. Sam and Rachel tried on their Hallowe'en costumes and played (and got in each other's way a few times!) and I talked to Katherine on the phone in lieu of an in-person visit. Then I talked to my friend Karen about potential Hallowe'en plans.

During this time my bagel was toasting and it got cold. I hurriedly ate a strawberry yogurt somewhere in there and we Skyped with my parents. We often Skype them after our breakfast, first thing in their morning. I love that the kids get to see my parents and my parents get to see the kids in their daily routines. Then Sam and Rachel played, I ate my cold bagel, made some tea and checked computer stuff (e-mail, blogs, Facebook, the weather.) I also played a few rounds of "Mad Birds," as Sam calls it, with him cheering me on. It's not selfish on my part, it's entertaining Sam, really :)

Then Sam went and played downstairs for a bit while I did dishes and Rachel alternately walked around and played. And whined a bit, to be honest. (In the far right of the picture below you can see my cup of tea waiting patiently for me to drink it.) My dish doing music was Les Mis today, inspired by a post written by Erika, a blog friend of mine. 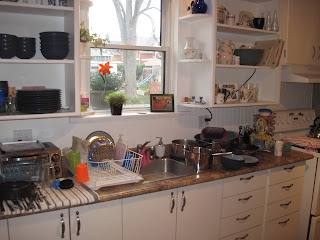 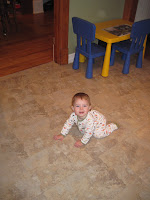 Then I changed some diapers, got some laundry going and played with Sam and Rachel downstairs for a bit. Then I fed Rachel some lunch, heated up some soup for me, and tried to ignore Sam's meltdown because I cut his sandwich into three pieces instead of two. After that it was naptime. Thankfully. Sam refused to sleep in his bed so we compromised on him being in his rocking chair. 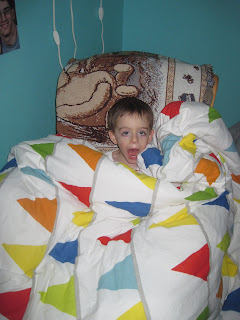 While the kids napped, I sat at my computer, blogging, eating lunch, drinking my (reheated) tea, and responding to e-mails. I also sorted through some folders of pictures to be printed. How sad that I was doing this exact same thing last year when I did this series. sigh. I love blogging because I've been taking so many more pictures but I hate blogging because now I have over one hundred folders of pictures to sort through. Yes, I still like to print pictures out for albums. 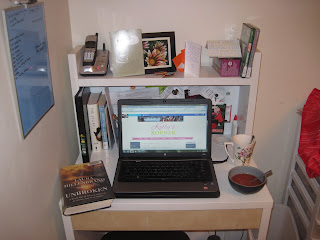 At about 4:45 I woke up Rachel and Sam, put the challah in the oven to bake and attempted to attack Mount Laundry-more, as Dave sometimes calls it. Fortunately I had distracting help from Sam and Rachel as they played peek-a-boo with some of the laundry! 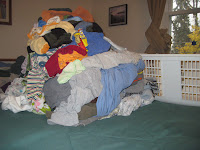 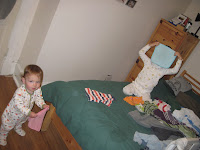 When Dave got home he turned lots of fresh food from our awesome CSA into a green pepper-potato frittata. The eggs are even ones Sam got to help gather yesterday! It was pretty good. And we celebrated Shabbat, doing the blessings fairly quickly because both kids were melting down. I don't even know why since they both had good naps and supper was right on time. 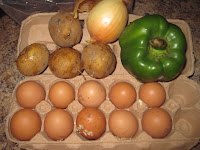 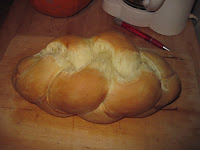 Supper was a little crazy because ALL Rachel wanted to eat was challah. She ate barely any of her supper. And I had only a few sips of my wine and then felt like falling asleep. I had a late night last night finishing one of my bookclub books and so I was very tired today. 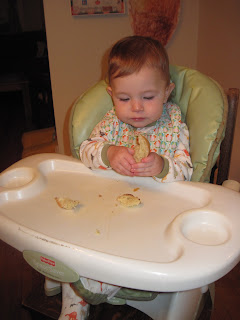 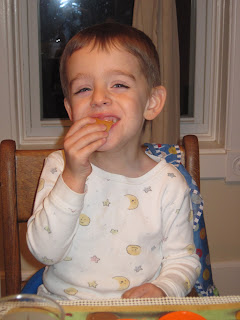 After supper I played Angry Birds while Sam and Rachel cheered me on (it really is family entertainment) and Dave played guitar upstairs. He has to get ready for tomorrow night! (ohhhh, the suspense!). Then Dave gave Rachel a bath and, since she was freaking out so much, I went up to help. 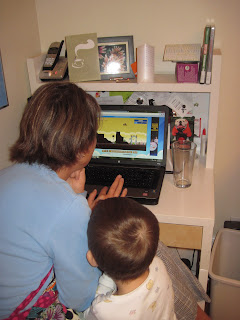 I put Miss Rachel to bed while Dave bathed Sam. Then I blogged while Dave put Sam to bed and now I'm going upstairs to fold one more load of laundry, drink some hot tea because I'm cold, and go to bed early because I am tired. And tomorrow is another busy day! Good night. 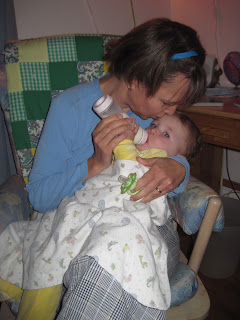 Labels: Blogging, Fertile Ground, Judaism, Parenting, Rachel, Sam, We Are Healthy (Or Not), Week In The Life, Yummy food