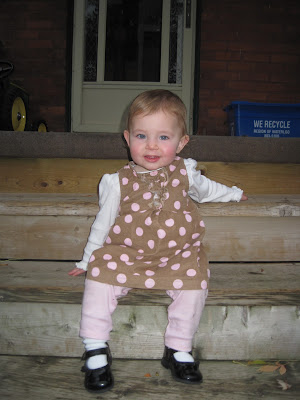 So I'm back after not having posted a hymn last week because we were in New York. I'm switching things up a little this week because I have a few things to share from our church service today and because, as you may have noticed, Sam is missing from the above picture. We had a very busy day and so I was trying to take the kids' picture at about 4pm. Sam was not feeling very cooperative (unlike our little poser!) and so the two pictures with him just didn't work well. So here you have Miss Rachel alone. And she's not on the chair in the kitchen because my mom mentioned she'd like to see a little variety in my weekly shots. And I thought "How much longer are we going to be able to take pictures outside?" So here you go Mom!

Today our service was about "In Gratitude To God In All Circumstances." Our worship leader wove into the service the story of her son, Nathan, who was born with a very serious health condition and died about two hours after he was born. They found out about Nathan's health when she was about 20 weeks pregnant. The worship leader had also been reading "One Thousand Gifts" by Ann Voskamp and wove some of those reflections into the service as well.

So two songs especially stood out for me today. And some of the songs were so powerful I just cried instead of singing. (One thing I should mention is that our church has the regular hymnal with a lot of familiar hymns and then two hymnal supplements with music from all over. Some of those hymns are older but I don't know them as well.)

Both songs I want to talk about today came from our hymnal supplement books. The first one is called, "We are often tossed and driv'n" by Charles A. Tindley. I'm not going to write all the words out so go and read the words I've linked to. They are so powerful and I just thought this song was so beautiful. You can also read a little more about Tindley on the site I linked to.

The second song was "The love of God" written by Frederick M. Lehman. Again, go and read the words, especially the third verse which, due to lack of time, is sadly all we sang today. But again it is so powerful to think about. According to my book, Lehman wrote this song while working at a citrus packing house. However he only came up with two verses and most gospel songs had three stanzas. Then he remembered the words he had heard during a sermon and it fit perfectly for a third stanza.

The words were originally attributed to an unknown inmate at an insane asylum because they were found written on the wall. However, it turns out that they were originally from an eleventh-century Jewish poet named Meir Ben Isaac Nehorai.

I didn't read ahead in my book before I wrote the above paragraph on how powerful I found the third verse but now that I know the words come from an eleventh century Jewish poet (and given the connection with my Jewish husband!), I am going to leave you the words here to ponder:


Could we with ink the ocean fill and were the skies of parchment made,
Were every stalk on earth a quill, and every man a scribe by trade,
To write the love of God above would drain the ocean dry,
Nor could the scroll contain the whole though stretched from sky to sky.