Show Us Your Life: Hallowe'en Costumes

EDITED TO ADD: I originally did this as a post for Kelly's Korner, however I am also linking up with Kate at 2 3 Kids, a Mini Van and a Mortgage to show you what we're doing for Hallowe'en this year. Basically we're going trick or treating at my husband's work and then for about ten minutes each with two sets of friends. Sam and Rachel are too young to really get what Hallowe'en is about so I figure this gives them a bit of friend time, a bit of fun time, and some candy, but not so much that they (and we) are dealing with the consequences for hours days afterwards. Now on to my original post. (For this year's costumes just go directly to the bottom of the post.)

I'm linking up with Kelly's Korner to show you our Hallowe'en costumes. I don't have a whole ton of Hallowe'en pictures on my computer so I will just post the last few years.

In October 2008 I was around twenty weeks pregnant with Sam and he had the best Hallowe'en costume of all time, lovingly sewn by his daddy. I was a nurse and Dave was a pirate-karate kind of guy. It was awesome! (I still have this costume if anyone is pregnant and wants to borrow it.) 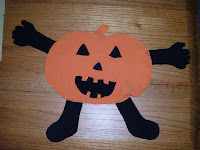 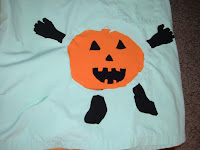 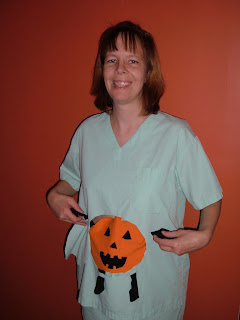 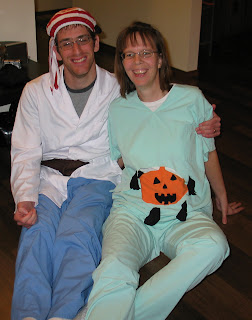 I always dreamed of having a "pod of peas" baby so, through friends, I was able to borrow the following costume for Sam for his first Hallowe'en, which rocked! And since we went to Ontario for Hallowe'en, and the pea costume was in Ontario, for Alberta parties I just dressed Sam in his Hallowe'en sleeper with a skeleton onesie on top. It was pretty lame :) 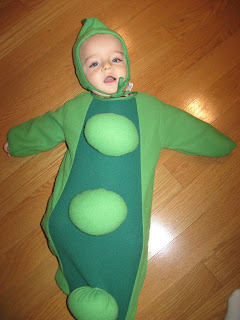 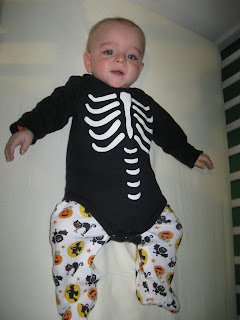 For Sam's second Hallowe'en I was super-sick in my pregnancy with Miss Rachel so Hallowe'en was a bit of a wash. Sam was a lion, a costume we borrowed from Tim and Janice. It's the costume Tessa wore the first Hallowe'en I knew her and then Willem wore it too. I was excited it was Sam's turn but also too sick to really care. 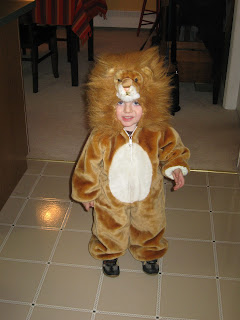 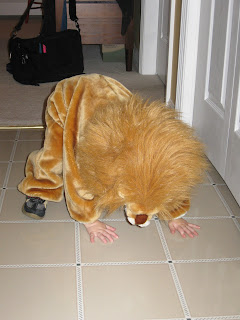 Last year I found an awesome deal on a pod of peas costume for Rachel, and since she was four and a half months she was alternately a karate-chopping pod of peas or a nonviolent one! And since it can be pretty cold in the Prairies for Hallowe'en, it was great that her costume was so fleecy and warm. Dave, Rachel and I were also all avid Saskatchewan Roughriders fans for part of Hallowe'en. 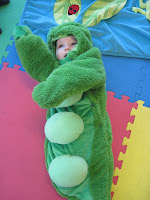 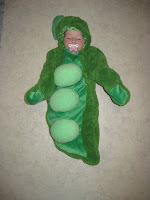 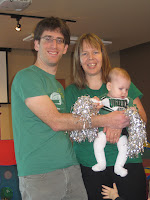 Sam was a dinosaur or alligator or maybe a dragon (I can't quite tell what it is; can you?) but he was not thrilled about wearing it. By the third time he wore it however he was quite excited about it which made me realize I should have gotten him used to his costume before the first time he needed it. This was another costume which we got from the Hedricks.

This year Rachel will be the lion and Sam is going to be Piglet, as modeled below. Although I still have no idea what we're actually going to be doing for Hallowe'en this year. Yerghks :() 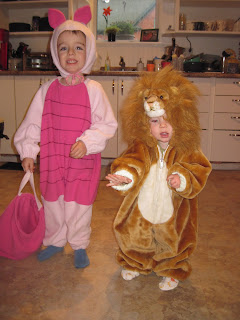 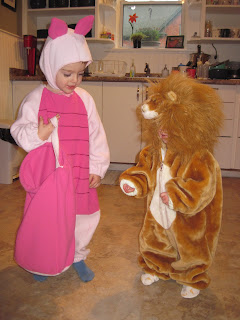