Guess Where We're Going For Dinner?

This was my Facebook status today: "Natasha hopes she can clean the whole house, do laundry, change bedding, wash dishes, finish weeding the boulevard AND surprise her husband tonight. That's today's list folks." And I managed to do it all. Yay me :)

Now granted, our house only takes two hours to clean and Sam and Rachel obliged by playing some game they invented together this morning and didn't pull all the toys off the shelf. They only used a big red ball. Rachel napped while Sam was at preschool which allowed me to get a lot done. And I do still have one load of laundry left to fold and put away.

And the boulevard (finished pictures coming next week!) only had a half hour of weeding left to do. It's been a massive, ongoing project which I've been working on here and there for two weeks now.

But the best part of today was having a surprise date night with Dave. I got this brainwave as I walked over to my ride to book club's house on Sunday. My ride's daughter babysits for us so I asked her if she was free tonight. So when Dave got home our babysitter was here and all he had to do was change and decide where to go from a list of places I gave him. He picked McCabe's Irish Pub. 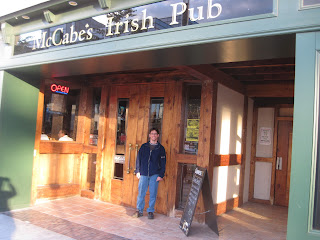 It worked out really well because we had a coupon for 25% off and Dave had a gift card he got from there a few weeks ago when he had to wait an hour and a half for pizza. They felt bad and gave him money! So our total cost of dinner, including tip was $7. Pretty good for a date, eh? 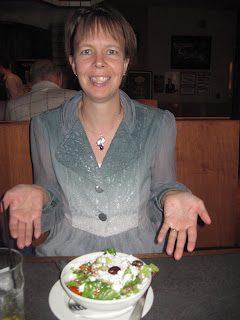 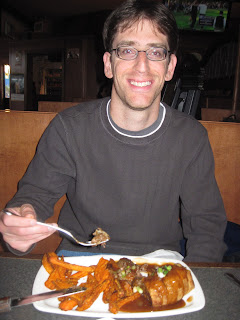 I had a Greek salad and potato skins, which were really more like half a potato each. Dave had steak and Guiness pie and sweet potato fries. We ate a lot of food. See? 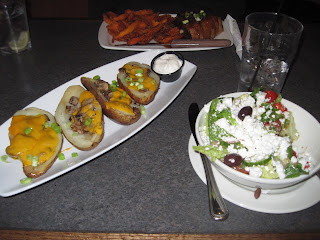 Then we walked to William's and I had hot apple cider and Dave had coffee and Black Forest Cheesecake. And I only ate like two bites of his cheesecake because I was sooooo full. Dave was even fuller because he ate two of my potato skins too. It was awesome to have a chance to talk just the two of us for a couple of hours. What with Jewish holidays, full time work, birthday parties and various other things going on we haven't had a ton of time to connect. So that was our lovely date. And the main conclusion we came to tonight was that we need to do this more often!