Diggers and Excavators and Tractors, Oh My! 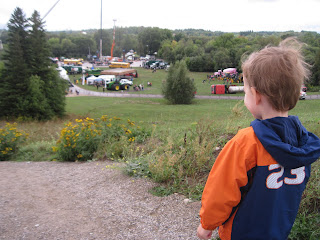 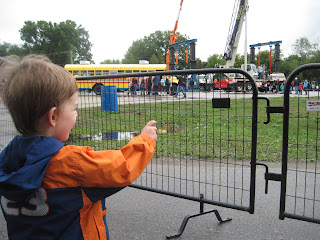 A few weeks ago my friend Karen e-mailed me and asked if we wanted to go to Mighty Machines with their family. After an extremely short conversation with Dave, we said yes! Knowing Sam would be very excited we didn't tell him what we were doing until yesterday. Mighty Machines was basically a big field with about 50 different large and small vehicles which kids could mostly climb all over, honk their horns, and generally have a field day. Above is Sam surveying the scene and telling us what he wants to go on. 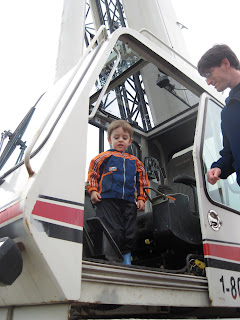 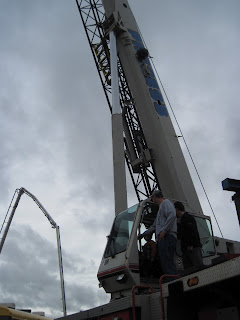 He didn't get to move this big crane, thankfully, but he got to go in the driver's seat and check it out. 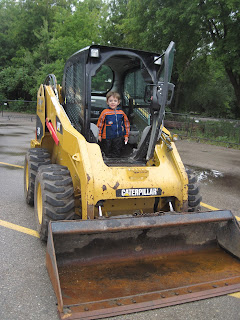 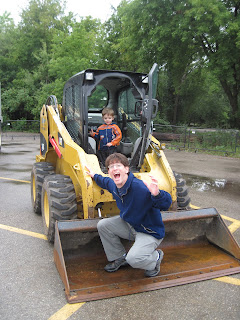 Then we headed over to Caleb and Sam's paradise -- mini construction vehicles. Sam tried to lift Dave in the loader... 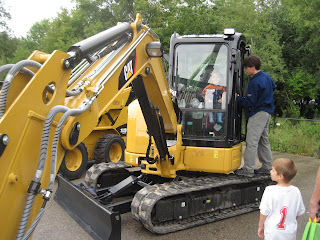 ...then he honked the horn on the mini-excavator until I was deaf. It was crazy loud with air horns and regular horns going off every two seconds, sometimes right in front of you. Thankfully Rachel and Nathan didn't seem at all phased. They happily hung out in their strollers the entire two hours.
Then we decided it was "Pictures in the Bucket" time! A family picture... 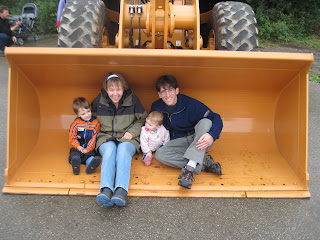 Then Sam got to try controlling the auger and the other thing on this machine. As you might have been able to tell my machine knowledge is pathetic when it goes to anything past tow trucks, dump trucks and some farm equipment. Eventually I will post video of some of the most entertaining things! 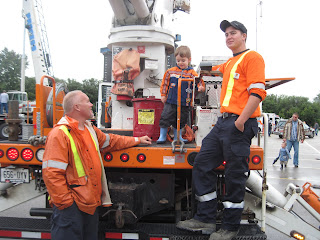 After that Sam got to be annoying as everyone else and tried out the air horn (left) and the regular horn (right) in the dump truck, which was painted pink for breast cancer. My question to Karen was, "How does having a pink cement truck support breast cancer?" If anyone knows the answer to this I'd love to know! 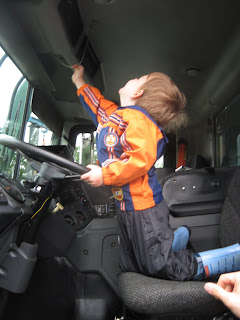 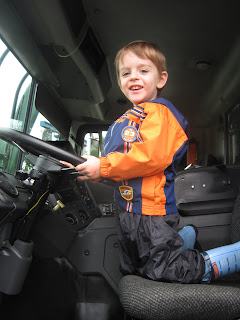 After that Sam checked out, and then "drove" the school bus. Check out all those buttons on the right picture! A child's idea of the best toy ever :) 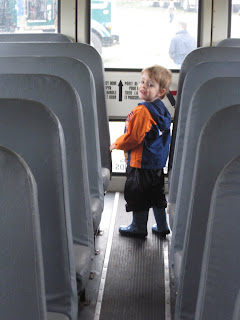 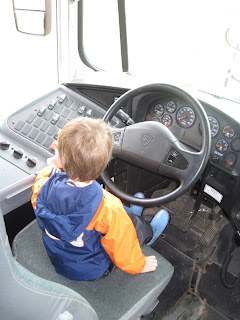 Throughout the time we were there, there were demonstrations of rolling over a semi-trailer. I don't get quite how it worked but it was cool to see the the semi-trailer on its side and then upright, over and over again. 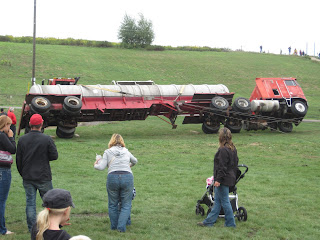 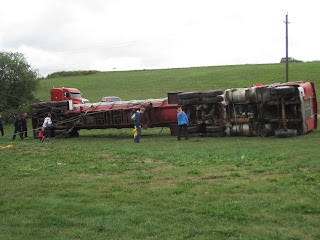 The longest lines were definitely to check out the huge tractor so Dave took a lot of pictures while waiting in line. 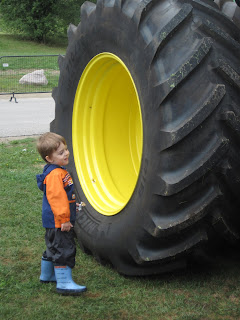 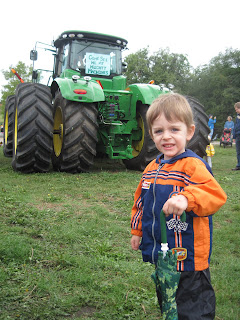 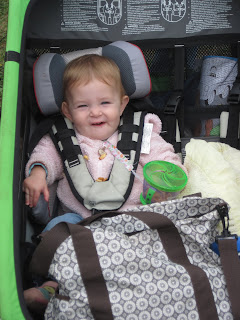 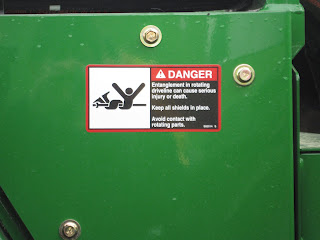 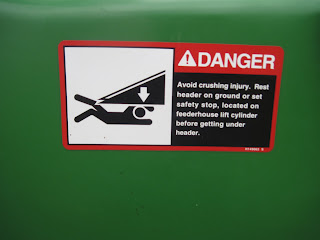 Finally it was Sam's turn! 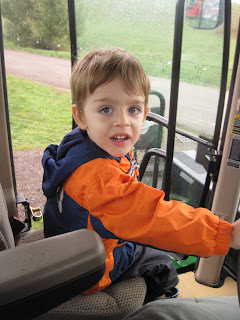 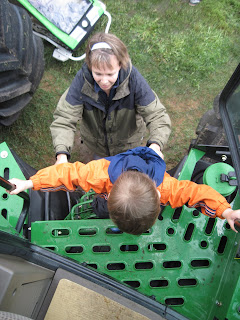 And then we got a family picture in one of the huge wheels! 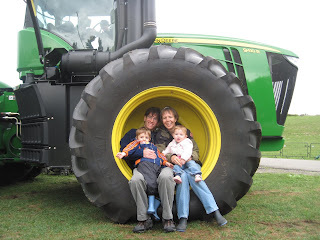 We convinced Sam that the lineup for the combine was too long and he should check out the semi-trailer instead. He loved it and "played a song" with the horn. 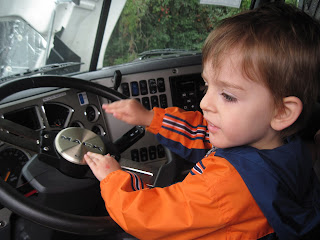 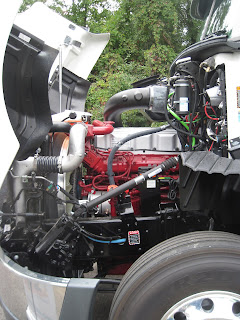 Sam did get a chance to try out the combine because the line almost completely disappeared while we were in the semi-trailer. Too bad Daddy kept getting in the way so we couldn't go anywhere. Even when we honked at him he refused to move! After the semi-trailer we picked up an extra recycling bin to use at home. Awesome! 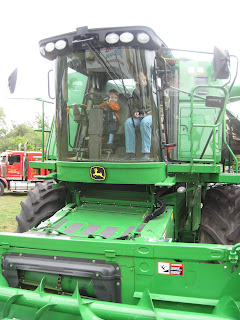 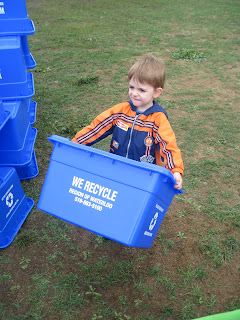 Then we watched how the recycling truck empties out its recycling and how the garbage truck compacts our trash. 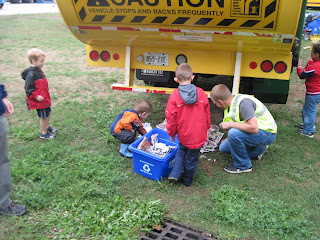 We all had lunch at Harvey's and the best part was when Sam realized he could squish his face between the tables. Of course, two seconds after I took the last picture he squished it too hard and we had a minor meltdown. 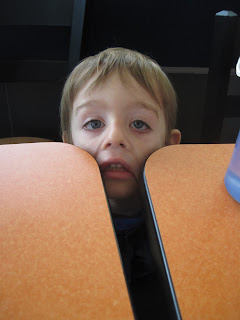 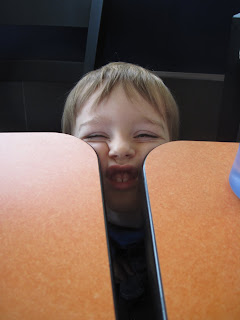 And then it was home for naps for all. After all the excitement we were all exhausted!
Posted by Natasha at 19:48