It's A Small World After All 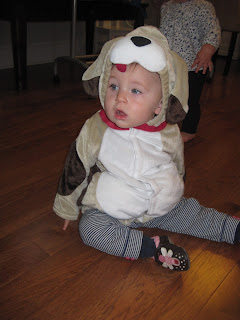 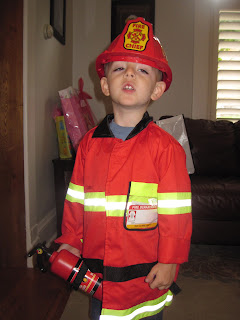 Today Sam was invited to Eve's birthday party. Eve is the little girl who lives two doors down. She and Sam have played together a few times. Rachel and I were also invited. I didn't think Sam would know anyone else there but it turns out that Raya from Sunday School is in the same daycare as Eve so she was there too! (Sherry pointed out that she didn't know what the costumes were about and I realized that I didn't explain that the theme of the party was animals and so there were a ton of animal costumes for kids to wear. Sam, of course, didn't want to wear an animal costume so he wore a firefighter one. Sorry about leaving out that detail. Mostly I just posted these pictures because Miss Rachel was an adorable puppy and Sam was a funny firefighter!) 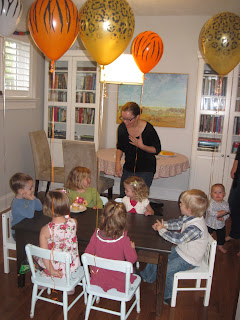 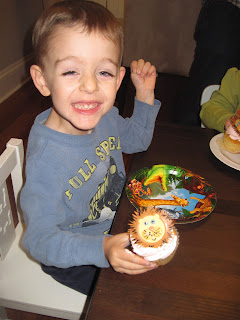 The party was a really cute animal theme and Sam ended up with a lion cupcake. His middle Hebrew name means "lion" so the lion is an animal we really associate with Sam. And when the party was over it turns out that I knew another one of the moms whose daughter was there. Kathy went to school with my cousin and so I'd seen her around but not for a few years. It really is a small world!

And another cool thing happened yesterday while I was sorting through those bags of clothes I mentioned. I found this t-shirt: 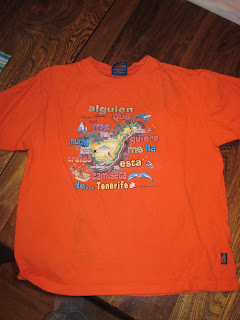 This is a t-shirt Dave and I brought back for Tessa (probably) from our trip to Tenerife in the Canary Islands in July 2007. It was before we were engaged, and a few years before we had kids. I totally shrieked when I saw it, started to laugh, and ran upstairs to show Dave. It's so awesome that our kids will get to enjoy this shirt too! (You can read more about our Canary Islands trip (and the rest of the Europe trip too) in our blog archives.)
Posted by Unknown at 13:36