So what's been happening around here lately besides Mighty Machines, church and stuff like that. Well stick around and I'll tell you. (And if you don't stick around I won't know unless you leave me a comment that you're leaving!)

Last week my friend Kristen invited us out for ice cream. We went to The Silver Spoon and I have got to go back there for tea sometime. I mean they have handmade chocolates from Italy. 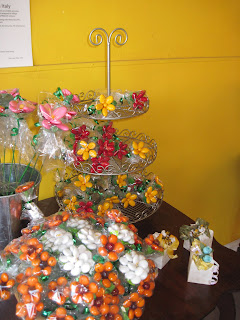 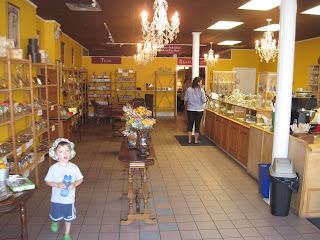 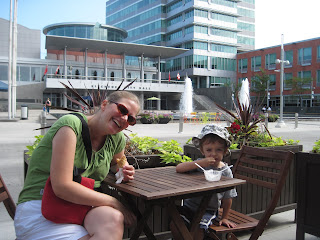 Since it is right across from the City Hall and its fountain we headed across the street for some water time. Since there were no signs prohibiting it, we took a chance and headed into the fountain. 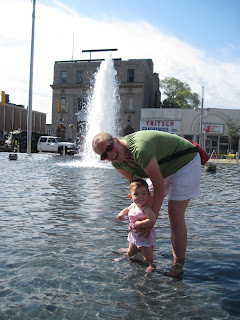 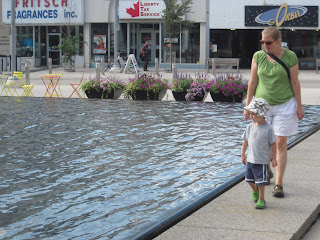 That is, until a security guard came and kicked us out. I guess walking in the fountain is illegal after all. sigh.

Sam and Rachel were playing some sort of game with all the shoes on the shoe rack on Friday. Until the recycling truck stopped by our house. Then it was all about watching that! 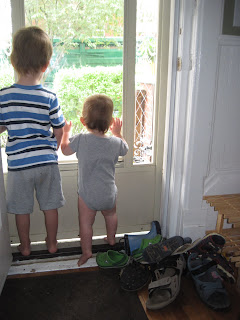 And Sam has decided that sleeping in his bed is overrated. He really wants to sleep in ours but we don't let him. (Unless he wakes up at 2 in the morning crying from a nightmare. Then all bets are off.) So he has taken to falling asleep on the floor. Hey! Whatever works is my philosophy. (As long as I can take a picture of it!) And yes, we move him into his bed once he is soundly asleep. 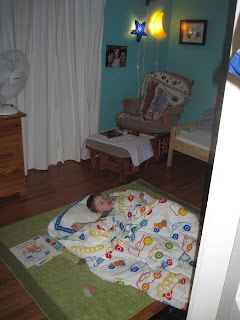 On Sunday after church we picked up hot-n-ready pizza and joined the Hedricks for lunch. It was a lot of fun. After that Dave and I stayed with Tessa and Willem while Tim and Janice went to sing at a funeral. When Rachel finally fell asleep (after just an hour of screaming/rocking/etc) we headed outside to play basketball. 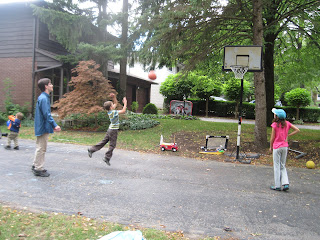 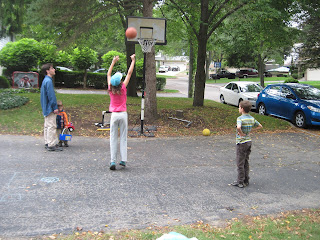 Sam entertained himself by driving around the firetruck and filling it with leaves and sidewalk chalk! And notice all the long pants and long sleeves. Can I get (yet another) "Amen!" for cooler Fall weather! 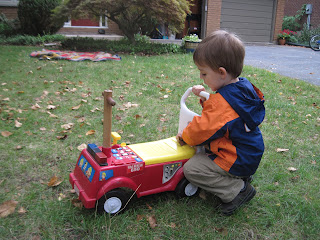 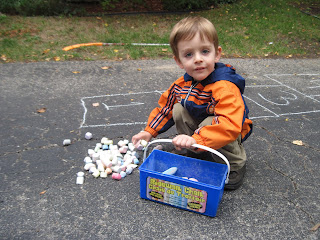 And last night Sam had his first haircut since about... um, April! Instead of going to a specifically kids' place we just went to a regular salon and Dave and Sam got their hair cut at the same time. Sam did really well and seemed to like being in a grownup chair. Below are pictures from yesterday afternoon (almost five months between haircuts is way too long!), last night (Sam told my parents he was "hedgehog-y") and this morning. He looks so much bigger with shorter hair. 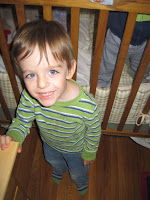 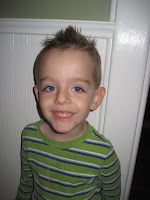 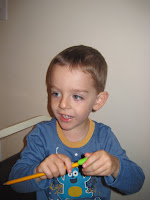 And now it's off to do laundry, dishes, and cleaning. It's exciting times around here, I tell you!
Posted by Natasha at 11:15