Bienvenu! This installment of Traversing Canada Tuesday comes with a guest author (Dave) and, right off the bat, an apology (how very Canadian). I had high hopes of writing a narrative history of Quebec, weaving various threads of history and culture into an enthralling tale. However, as I sit here on Monday night, I am realizing that this isn't going to happen. Quebec's story is long and complex, involving a centuries-long tug-of-war between English and French societies that continues today. 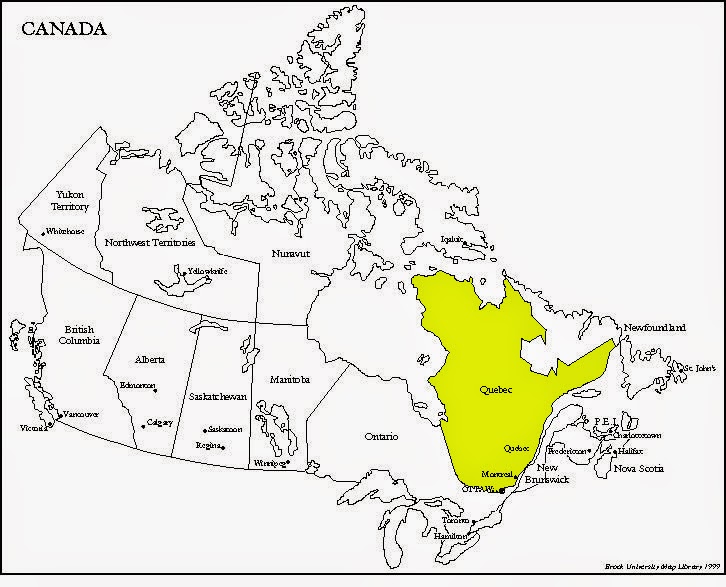 So, what you will get instead is a hodge-podge (or, in French, méli-mélo) of history, culture, sports, food, and personal anecdotes. Bon appetit!

History
The first few centuries of Quebec's history were defined by an ongoing struggle between the English and French. Initially the French had the upper hand; Jacques Cartier claimed the land for France in 1534, Samuel de Champlain established Quebec City in the early 1600's, and Montreal was founded few decades later. However, there were numerous battles with the English in the 17th and 18th centuries, and the English eventually won a decisive victory at the Plains of Abraham in 1759.

Another key part of Quebec's history were the voyageurs, fur traders who traveled from the St. Lawrence River, through the Great Lakes, and all the way to Saskatchewan by canoe to trade with Native peoples and sell their goods. They were responsible for much of the European exploration of the late 17th century, and are an essential part of Quebecois folklore.

Although the British were in control from the mid-18th century onward, the province still had very strong French roots, and the Catholic church played a crucial role in the province's social, religious and cultural life for the next 200 years.

More recently, the Quiet Revolution of the 1960's saw an upheaval of this social order, with more liberal, secular values taking the place of the rigid, conservative church/state control that had been in place for generations.

Food
Montreal and Quebec City are both known for having a European feel to them, with lots of cafes and great restaurants. However, Montreal's well-established Jewish community has also made its own gastronomic contributions, with delicacies such as Montreal bagels (and yes, these are totally different from bagels in Toronto!), smoked meat and deli food of all sorts.

A local favourite which has recently gained more widespread appeal is poutine, which is fries topped with gravy and cheese curds. Recent variations on this theme have included pulled pork, maple syrup, and even butter chicken (!), but I much prefer the original, preferably purchased from some greasy-spoon diner in Montreal.

Language and Culture
As you may recall, Quebec is not an officially bilingual province -- its only official language is French and, outside of Montreal (which is quite bilingual), this is definitely the dominant language. This has resulted in a separate ecosystem of French TV shows, magazines, and pop stars, who are wildly popular in Quebec, but virtually unknown elsewhere in Canada. Notably, Celine Dion got her start as a teen star in the French music scene in the early 80's, before attaining more widespread fame in the 1990's. However, she has continued to release French-language albums alongside her English albums, and these have generally done very well in French Canada.

Natasha and her friend Sarah at a "Keep Canada Together" rally in Montreal
October 1995
Quebec has also retained a strong sense of its own history and identity. Many Quebecois (that is, people from Quebec) see themselves as part of the nation of Quebec first, and the country of Canada second, if at all. In fact, there were two significant referendums on Quebec separation in the 1980's and 1990's, with the most recent (in 1995) resulting in a 50.6 to 49.4% vote to remain within Canada. Today, there are still Quebec-focused parties at the provincial and federal level, but the question of separation has largely faded into the background, politically. Outside of the separation issue, Quebec is one of the more liberal provinces in Canada, with a strong social safety net and progressive attitudes on many social issues. 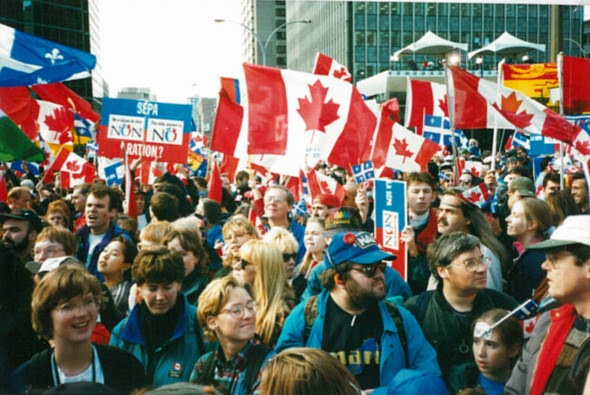 Another photo of the 1995 rally
Personal anecdotes
You may have gotten this far and found yourself wondering "Why on earth did Dave decide to jump in and write this blog post?" Well, my dad was born and raised in Montreal, and I spent many long weekends, stretches of summer vacation, etc., as a kid visiting my grandparents there, as Montreal was "only" an eight-hour drive from my hometown (near Kitchener/Waterloo).

Although much time was spent sitting and visiting with my grandparents (oooh... exciting!), a few more active highlights come to mind, as well: 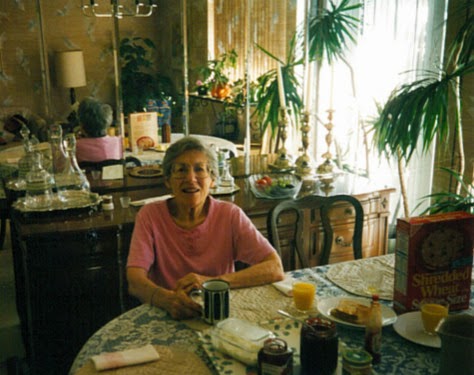 Dave's grandma at her condo in Montreal
(Rachel is named after this grandma!)
Other tidbits
Here are some other bits and pieces that didn't fit elsewhere in my incredibly well-organized post.
Sources
Canada Close Up: Quebec, by Marguerite Rodger. Published 2009 by Scholastic.
Wikipedia articles on the Expos, Celine Dion, Quebec place names, and Ubisoft.
Posted by Dave at 09:40