On The Eighth Night of Chanukah... (AKA Winterfest!!!) 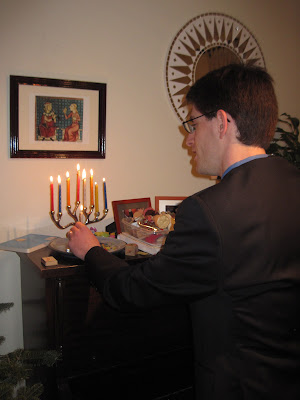 ...we lit all the candles, in a suit because we're formal around here we were heading to Dave's work adult holiday party. Remember the kids had theirs last time. 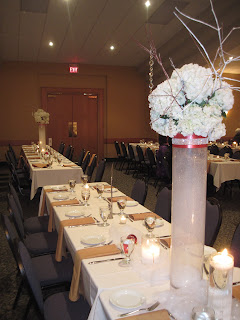 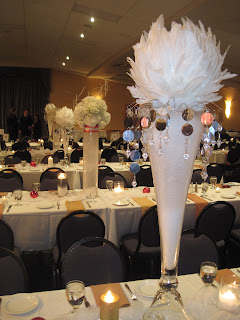 Dave's adult work party is a formal event called Winterfest. And it was awesome!!! We just about didn't go because Sam wasn't back to normal yet. He's had a high temp and been exhausted since Monday so we've been in survival mode around here (aka staying in pjs all day, not cooking supper, definitely not blogging, etc). But we decided that he would be okay with our babysitter so we went. And I'm soooo glad we did. 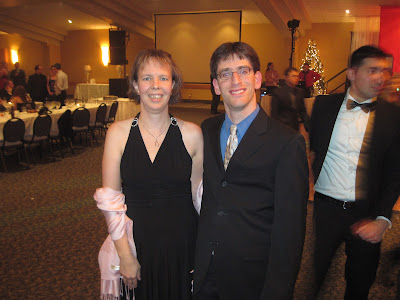 It was in a huge ballroom. All the employees were allowed to bring a guest so there were hundreds of people there. We sat with Dave's co-worker, Kyle, and his wife Rochelle and had a great conversation. And there were door prizes (Kyle won one, Dave didn't). I wanted Dave to win the iPhone or the travel voucher. Sadly he didn't. 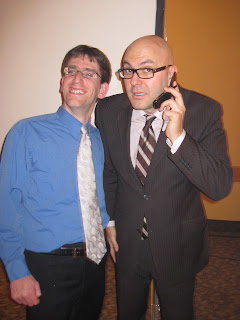 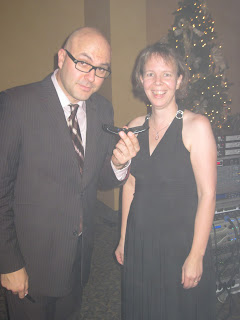 The party was emceed by James Cunningham. And then he did a half hour comedy routine and he was hilarious. At one point he asked, "Who has a Blackberry?" and Blackberry owners cheered. "Who has an iPhone?" And iPhone users cheered. "Who has a flip-phone?" And I cheered so loudly he said, "Hello Amish people!" And later he asked who was from Saskatchewan and I cheered again and he said, "Of course the flip-phone people are from Saskatchewan!" (Disclaimer: The picture of James and I is worse because I knew instinctively after taking a few bad pictures that in the dark setting, the night setting worked better for taking pictures on our camera. When Dave went to take the picture of us he went, "Oh, it's on night setting" and switched it to portrait setting. Therefore bad picture quality. Oh well. It was either this or the flip-phone picture which James is making fun of in both pictures!)

Dave and I were both looking forward to the dance but it was all...club dance music which we can't dance to. So we came home. I cannot wait for next year's Winterfest. Hopefully by then I will own a super-awesome dress so I won't be able to have to borrow this one from my friend Karen, and a pashmina so I won't have to tap Janice again! Thanks women (and fashion consultants) for helping me out! 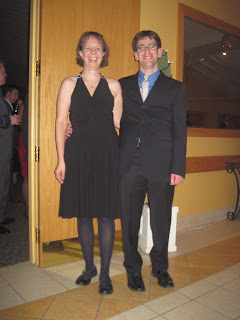