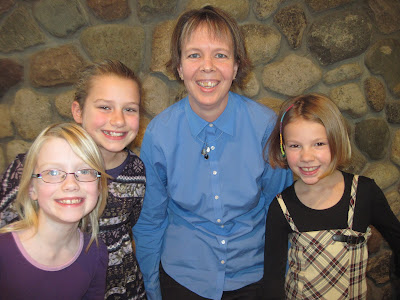 I am back with Hymn of the Week. And some pictures which have nothing at all to do with Hymn of the Week :) First of all, we are in the lovely season of Advent and I thought that my book would have a ton of Advent hymns which I could write about. However it disappointed me. It has many Christmas hymns, but not one single Advent hymn. Huh. So each Sunday from now until Christmas I will be posting the story behind a Christmas hymn.

But before I get to that I am going to explain the pictures. The picture above is me with my three LOGOS girls. I have been teaching them Bible Time and we have been going through the church year this session. I love getting to spend some time each week with these three and am looking forward to seeing them again regularly in January.

The picture at the bottom of the post is the hat and mitten tree at church. During Advent the Sunday School program and the church are joining together to provide hats, socks and mittens for a lower-income housing community our church works with. Yesterday Sam and I went shopping and came home with two bags of hats, mitts and socks to bring each Sunday. Today we brought four hats. Sam's pick was the red Angry Birds (or "Mad Birds" as he calls it!) hat which is in about the middle of the picture! It was fun because for a few months now Sam has been wanting to help collect the offering so today I asked one of the ushers if Sam could help. Tony said yes so Sam and I collected offering on one side of the church. Then Sam marched his offering basket up to the front, grabbed his Mad Birds hat and spent what felt like forever (but in reality was probably only 30 seconds) trying to determine the best placement for his hat! And the rest of the congregation waited until he was done so we could start congregational prayer. Thankfully, next week Sam won't be helping with offering so we can just put our stuff on the tree with everyone else.

Now for the Hymn of the Week. I am just going to post about the hymns in the order in which they appear in my book. Today is "Hark! The Herald Angels Sing" (words can be found here). This is one of over 6,000 hymns written by Charles Wesley. According to my book, Wesley didn't like people messing with his words, and in one hymnal he wrote, "I would desire that [people] not attempt to mend [the hymns], for they really are not able." He goes on to write that he and his brother no longer wanted to be "accountable either for the nonsense or doggerel of other men." Ha ha ha!

However, this hymn originally began,

Hark, how all the welkin rings,
"Glory to the King of kings;
Peace on earth, and mercy mild,
God and sinners reconciled!"
The word "welkin" is an Old English term for the "vault of heaven." We have George Whitefield to thank for "mending" Wesley's hymn. Although my thinking is if we'd all grown up singing the original words they wouldn't seem all that strange to us now. 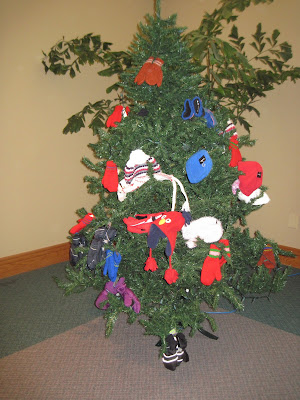