Before I start my Week 8 of summer post, can I unload a little bit?

Yesterday was one of those days when I thought I was going to lose my everloving mind. Sam and Rachel had 239 fights about Lego wheels. Yes, I counted every single one, and no, that's not (much of) an exaggeration. 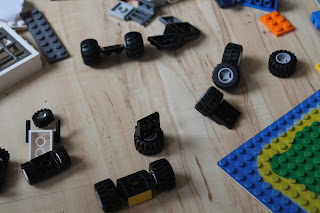 Because clearly we don't have enough Lego wheels...
Sam whined, "Raaaaa-chel" so many times that I told him, "Sam, if you say 'Rachel' again, I will Rachel you." Thankfully he stopped because I don't even know what that means.

I killed a fly and Rachel freaked out for seventeen minutes because "He was going home to his famileeeeeee. Now he's dead and he caaaaaaan't. They will miss hiiiiiiiiim." She almost had me feeling sorry for the fly. Almost.

And by 10am, I was counting the seconds until 6:30, because I determined that the kids were going Straight. To. Bed. IMMEDIATELY after supper. (At that point I had 16, 200 more seconds to get through and each one was feeling like a year.)

I'm blaming all of this on too many late nights (thus the early bedtime), post-vacation letdown, and the rain.

Other than yesterday, this week was rather... well, dull. Well, except for the day when Rachel may (or may not have) ingested trace amounts of Borax. That was an exciting five minutes on the phone with Poison Control. (I wish I was joking. And she's fine.) We unpacked our house, I worked, and when I wasn't working, I was watching my friends' son (who is blognonymous). When I wasn't doing any of those things, I was trying to read or sleep. Yeah, that was my life this week! 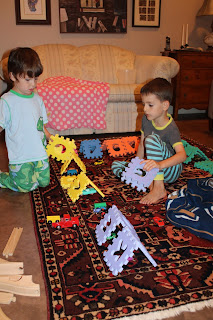 Before they had 239 fights about Lego wheels, Sam and Rachel spent the entire day playing in Saskatoon. They didn't even want to eat lunch that day. Seriously. I thought these houses they constructed for their cars were really cute. (The houses are made from foam letter blocks in case you want to get creative.)

We had to get up at 3:30am to catch our flight back to Ontario. When the pilots came to the gate, Sam shyly walked up and said Hi. The pilots were really nice and friendly and invited Sam and Rachel to come fly the plane! So Sam and Rachel went to visit the flight deck. 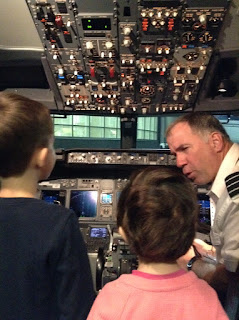 I think one of the kids had just asked a tough question! 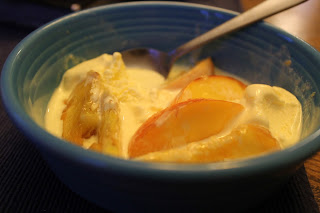 Janice and the kids were gone for the week so we bribed Tim to come trim our vines invited Tim over for supper one evening. We had peaches and ice cream for dessert and they were delicious! 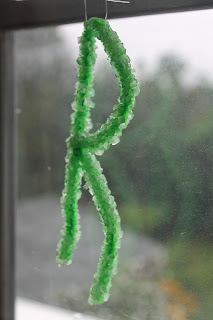 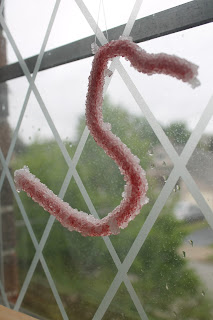 I found a fun project on Pinterest about growing crystals on pipe cleaners. Sam and Rachel made these sun catchers for their rooms. I'm so glad these actually turned out because it made the whole conversation with Poison Control completely worth it. I'm kidding. Mostly. 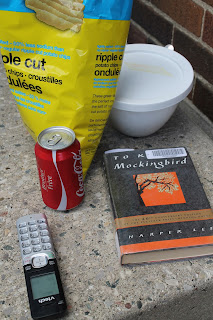 Yesterday afternoon I completely threw in the towel and instead of folding laundry, I just sat outside, ate chips and dip, and read. It made about 3,600 seconds go just a little faster. 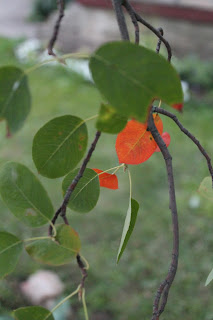 And even though we've had some hot temperatures this week, I saw this small sign that Fall is on its way. I don't know how I feel about that.

So that was week 8 of our summer. I'm so happy it's Friday, and even better, the weekend!!! We have two double dates planned and Saturday morning we'll be chasing airplanes on the runway. You think I'm kidding, don't you...
Posted by Natasha at 08:35