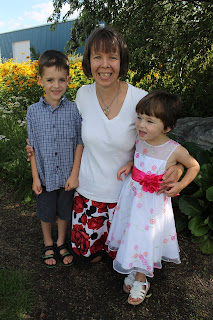 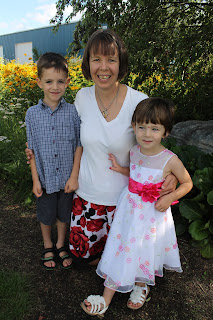 My friend Chris got married on Saturday and that was one of the main reasons we flew to Saskatchewan this week. Unfortunately, I took no pictures of Chris and Kaytee together which is a little ironic. However, I did take many other pictures. Above are Sam, Rachel, and I together, after the ceremony.

The ceremony was in a grove, where Chris and Kaytee sat on a beautiful swing, when they weren't actually getting married. Our friend, Kevin, performed the ceremony and it was so beautiful. I got to be a part of a scripture litany composed of the voices "Wisdom," "The Prophet," and "The Beloved." I was "The Beloved" and read from The Song Of Songs, including the line Dave and I repeated to each other as we exchanged our rings at our own wedding, "I am my Beloved's and he is mine." A choir sang, we planted a tree, and it was just so meaningful.

Since the wedding took place on Chris' parents' farm, Rachel changed her dress after the above pictures so she could enjoy playing in the playhouse, eating popcorn, and jumping on the bouncy castle, which I renamed "the babysitter" because that's where my kids were for the majority of the reception! The adults could visit with each other, congratulate Chris and Kaytee, or participate in the ax throwing event! I was going to take a turn but an ill-timed toileting accident from one of my kids prevented me. Sadness.

Sam and Rachel thought the bathtub of drinks was hilarious! 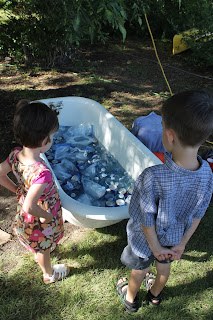 The reception featured pizzas baked in on-site stone ovens. It took awhile for everyone to get their food, but boy, was it worth the wait! Chris, and his sister, Rachel, own a hydroponic greenhouse, named Floating Gardens, where they grow delicious produce. They sell at the farmer's market in Saskatoon and much of the food came from people they've met there. (At least, this is what I'm assuming.) There were specialty butters -- basil, chive and garlic, and nasturtium (Yum!!!). There was local ice cream for dessert. And there were veggies from Chris and Rachel. All the food was A-M-A-Z-I-N-G. 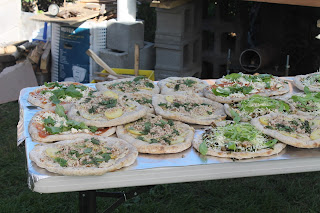 The reception was held in a tent in Chris' parents' backyard. It was beautiful. Chris and Kaytee put so much thought into everything. The glasses were mason jars, specifically saved for them by the local thrift store. The dishes were made from leaves and can be composted. (I saved a set of four to take home. I don't how many uses we'll get out of them but they're super-cool!) 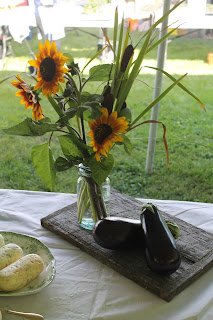 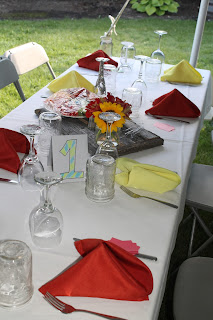 Here are Kevin and Chris during the post-ceremony mingling. I told them I also wanted a "candid" shot, so they pretended to be deep in conversation. Ha! 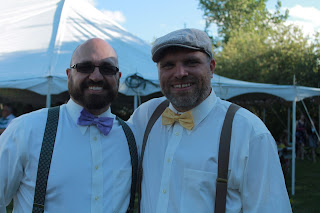 And my Rachel was completely intrigued by the fact that her name is "Rachel Katie" and that Kaytee got married and Rachel (Chris' sister) emceed the reception. So we had to get a picture of Rachel Katie with Rachel and Kaytee. Are you confused yet?! 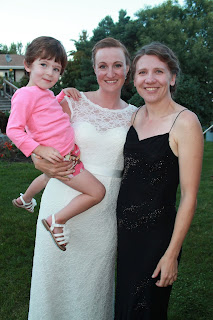 When she wasn't bouncing in the castle, Rachel was hanging out with Frieda, the daughter of my friends, Jason and Katharina. I was excited to visit with them, and our other friend, Sara. 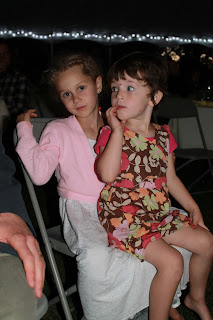 The night ended with fireworks (during which I could take no pictures because I was holding (a slightly terrified) Rachel), and the dance. We only stayed for a little bit of the dance, but we got to dance with both Chris and Kaytee. 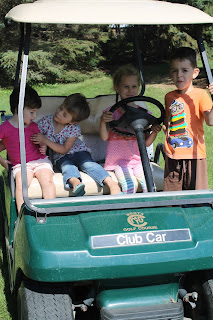 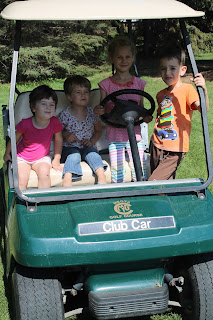 The next day we went back out to the farm for a bit. Sam and Rachel played a bit more with Frieda, and her sister, Johanna. They especially enjoyed hanging out on the golf cart! 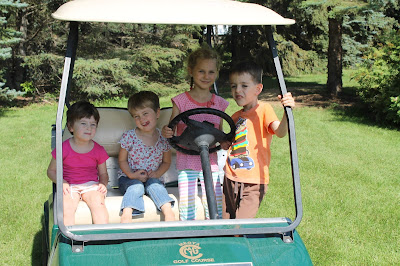 I helped clean up a little bit, mostly wiping off chairs. I also took this picture of Rachel (the elder), driving the forklift in her dress. 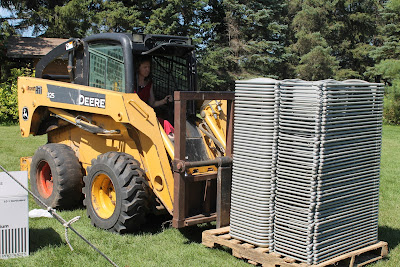 And Sam and Rachel enjoyed hanging out on this unique bike, and despite having sore legs from too much jumping the night before, spent more time in the bouncy castle. 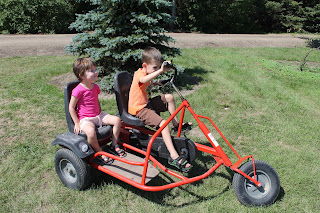 It was so much fun to be a part of Chris and Kaytee's wonderful, fun, celebratory wedding! And it was also fun to be able to catch up with some old friends.
Posted by Natasha at 13:02