From The Most Fun To The Least Fun 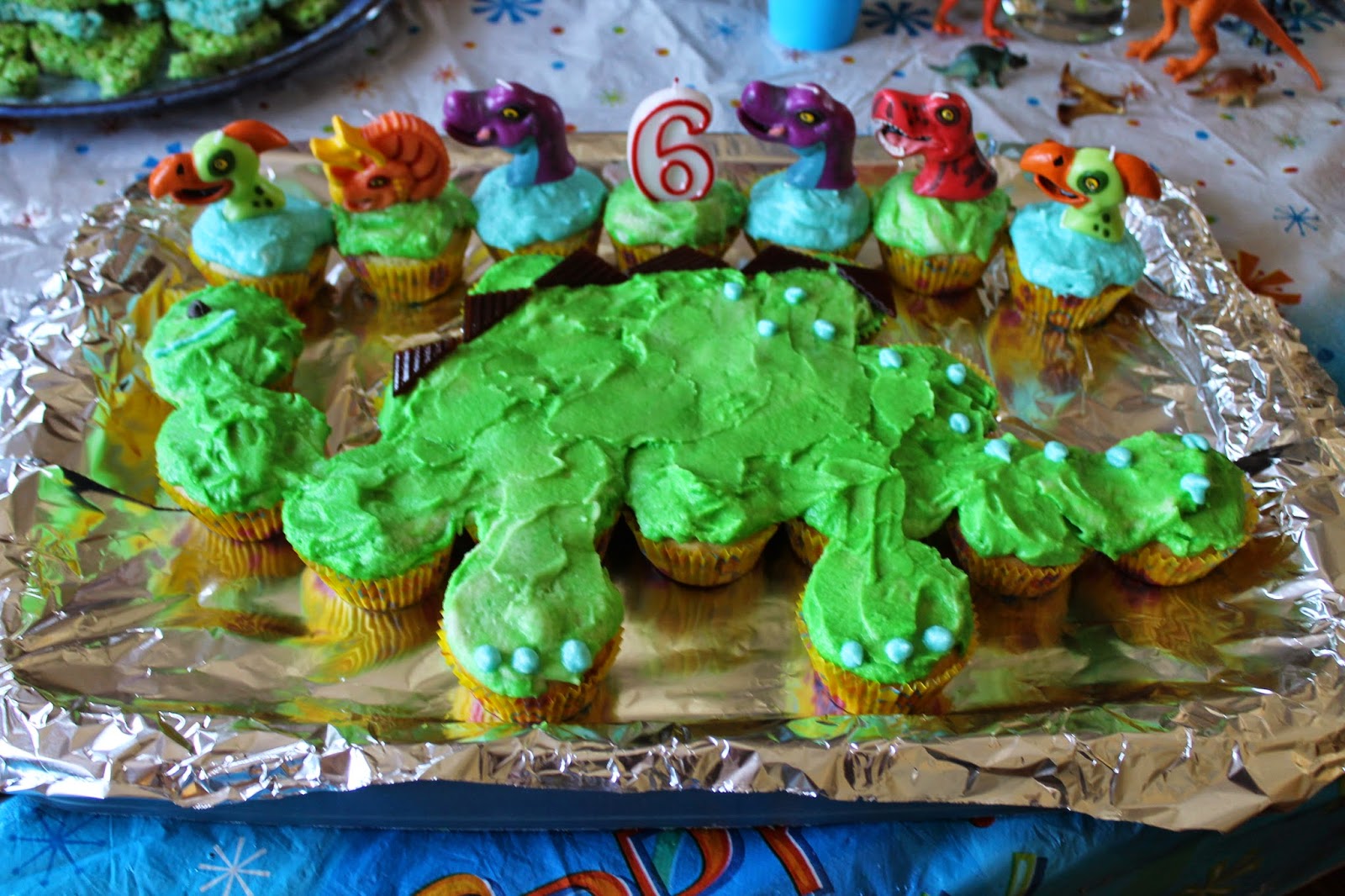 A year or so ago, Janice asked if I wanted some dinosaur candles. She had six of them, and Voila! The theme for Sam's sixth birthday party was born. As with all birthday parties I throw, I scoured Pinterest for ideas. I found some I was really excited about, such as how to make a dinosaur cupcake-cake. I thought it turned out really cute, even if it wasn't as perfect as the original pin. 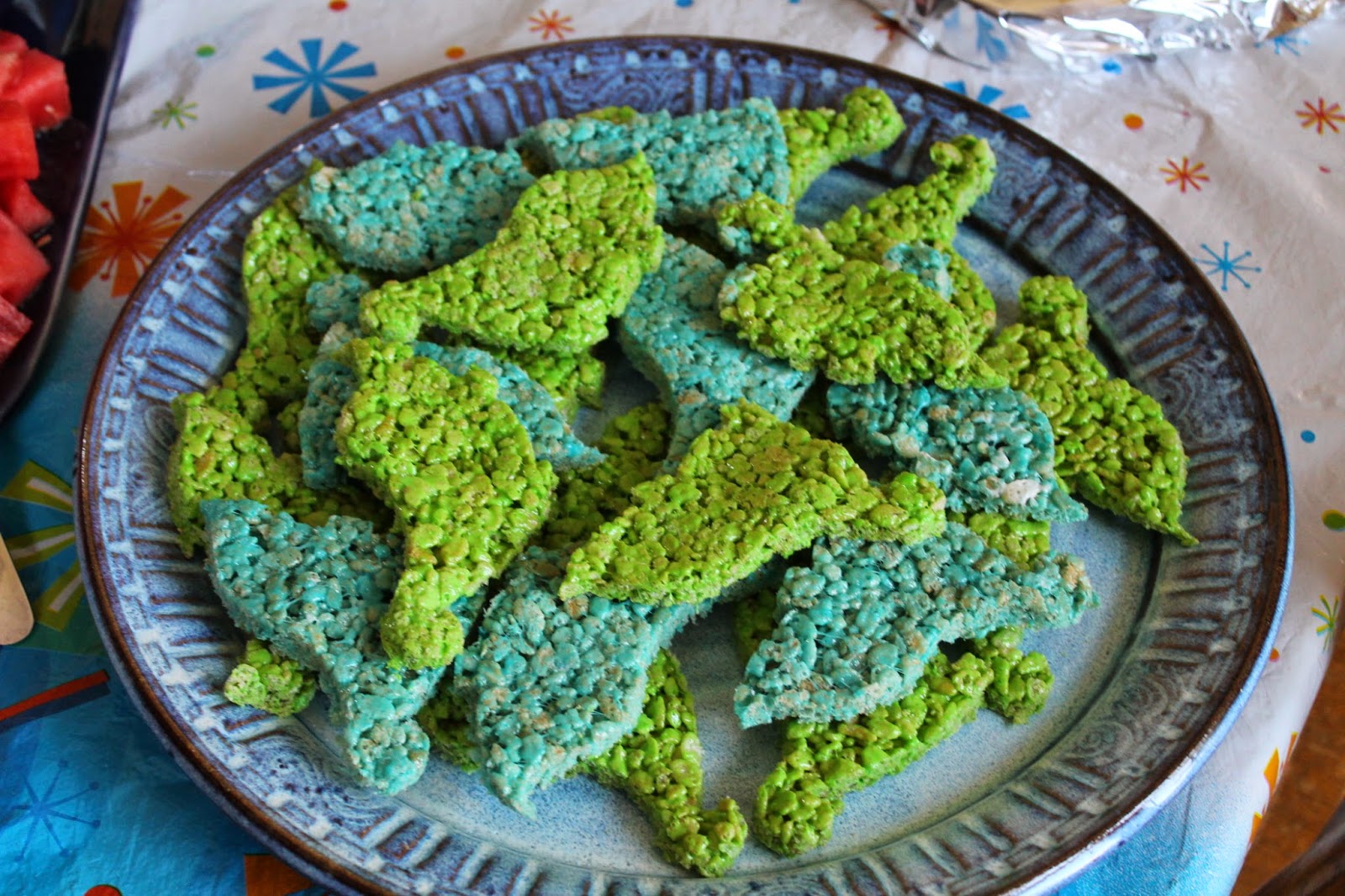 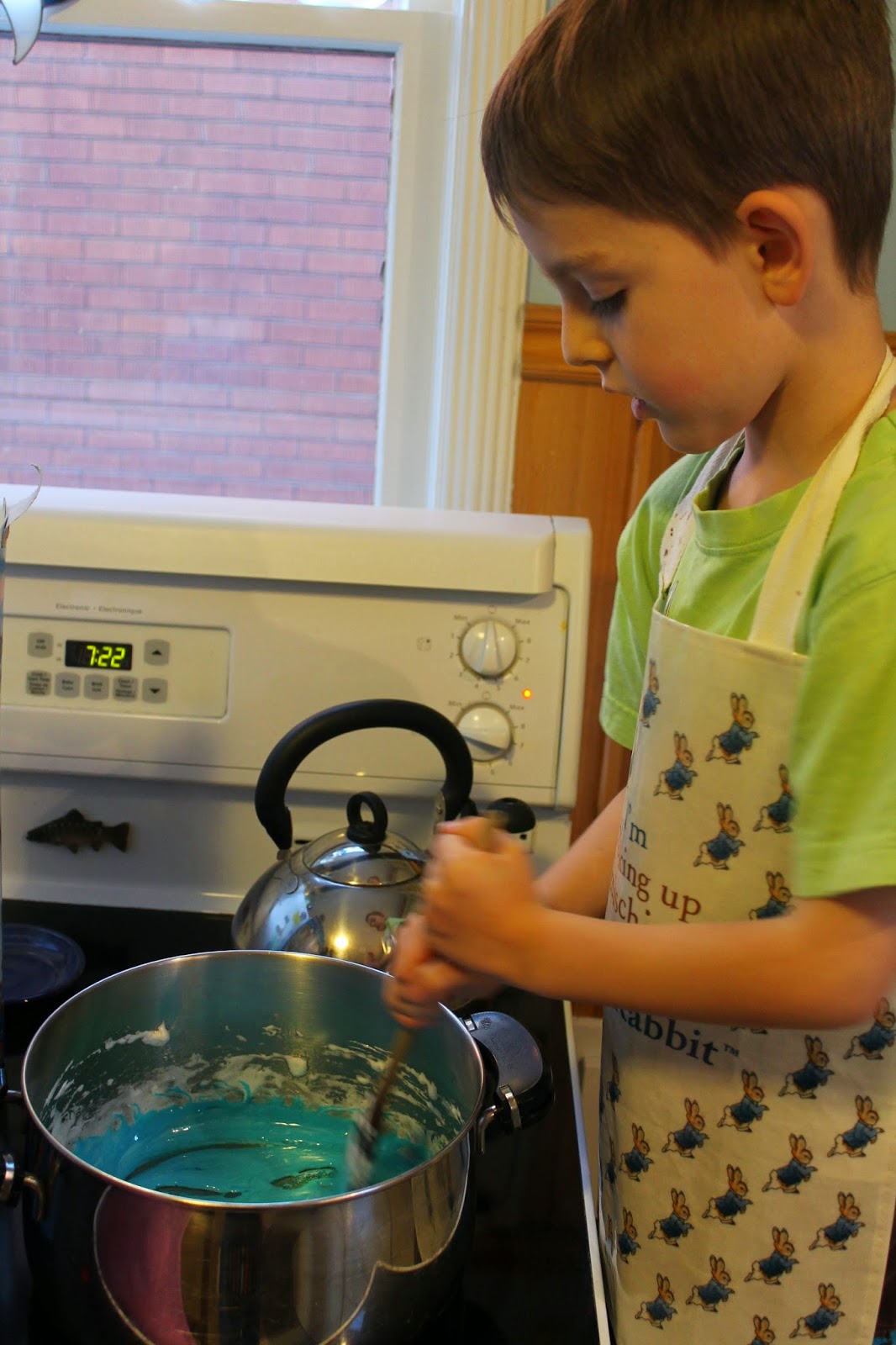 Sam really enjoyed getting involved in making these dino Rice Krispie treats. He especially liked making the "coloured whipped cream" as he called it. 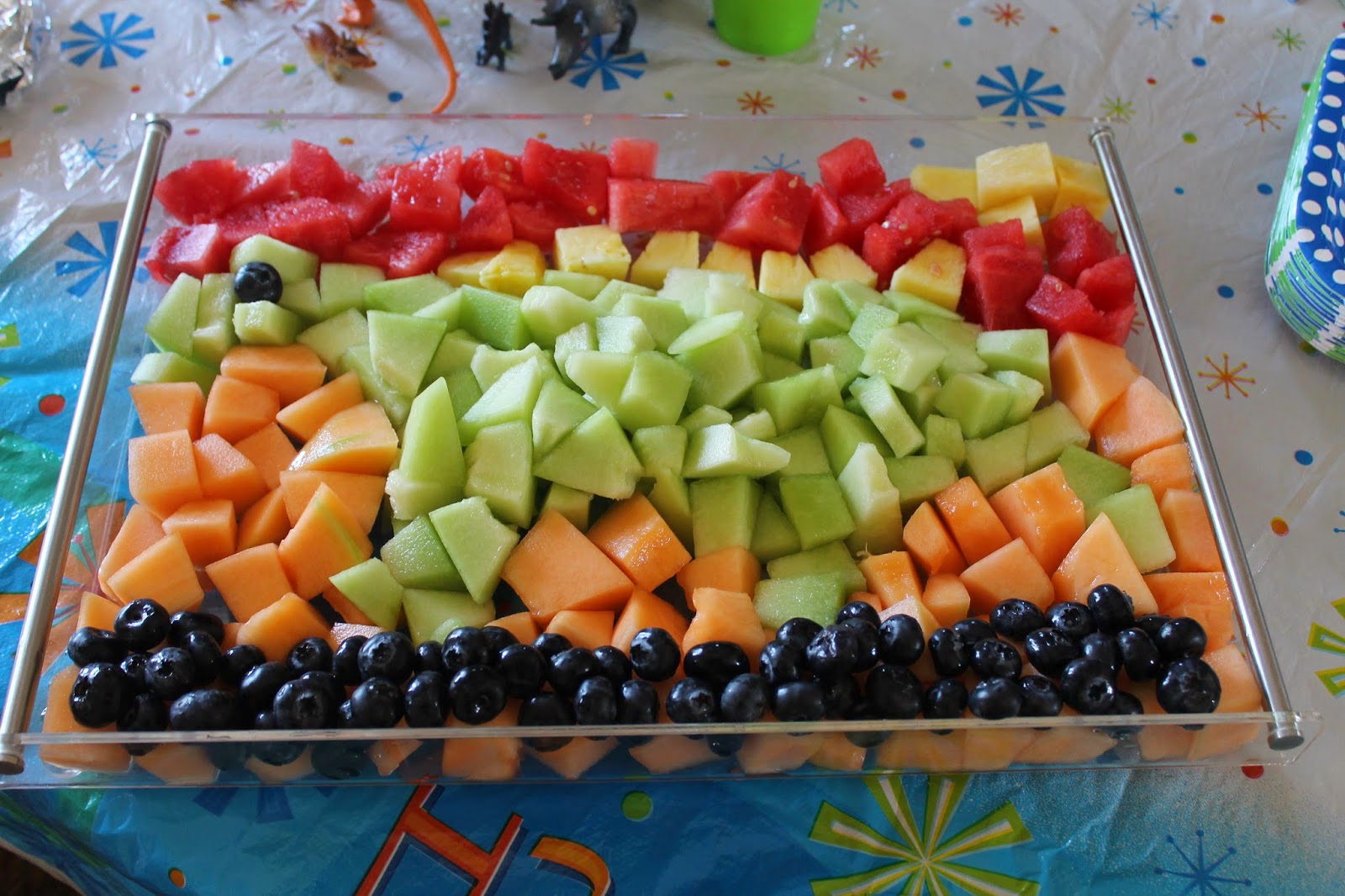 Dave made this awesome fruit tray. I told him that I was really thankful that not only does he encourage me to follow my crazy Pinterest-inspired dreams, but he also helps me to implement them! He is a fruit tray master, as you may remember from Rachel's owl party last year. 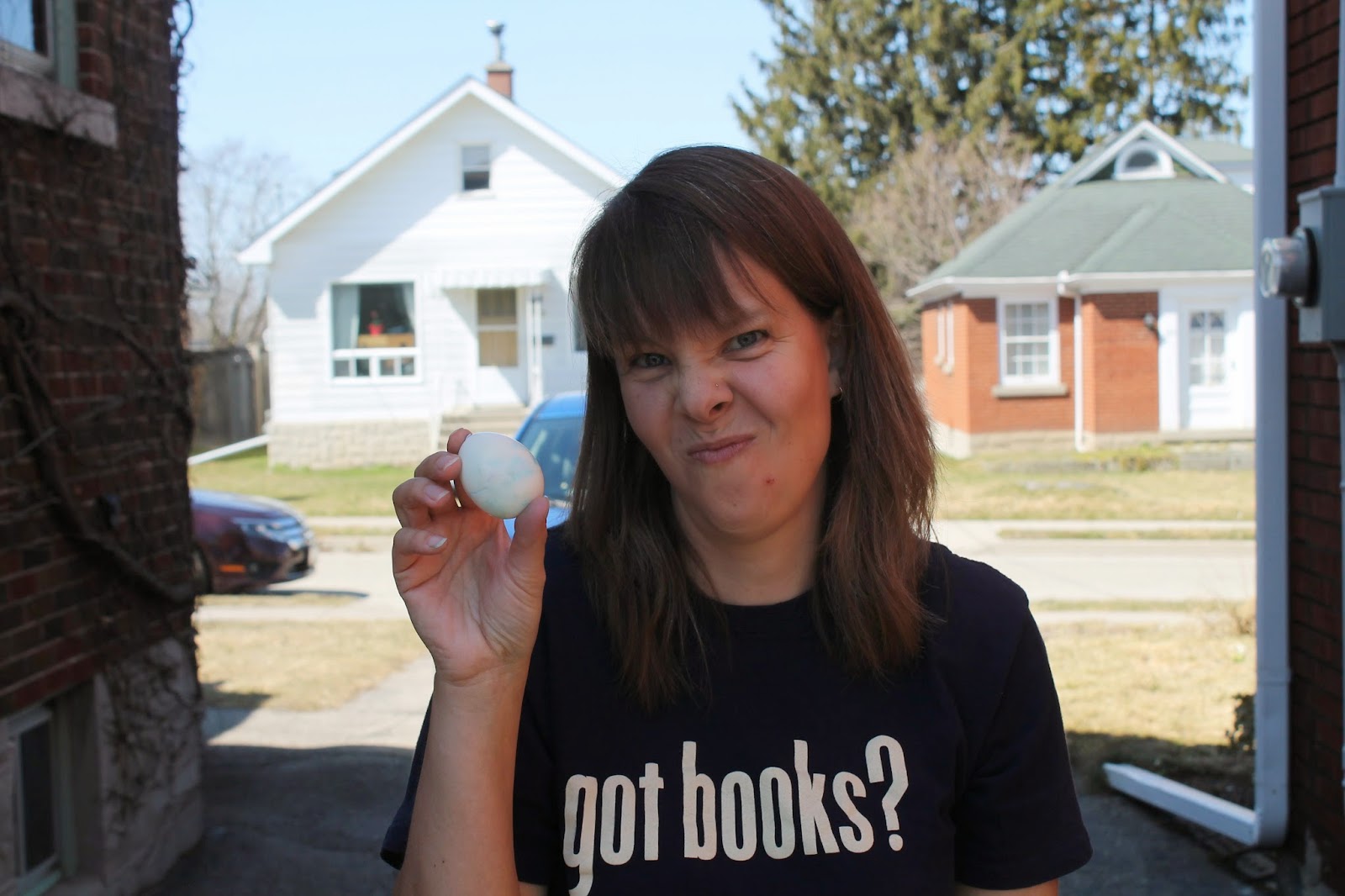 Sadly, this year, Pinterest failed me a few times. These dino eggs didn't work at all, as you can tell from the non-streaked egg (and my unimpressed face) I'm holding above. Also, after spending way too much money, and going through five different kinds of glue (and craft wire and pipe cleaners), we finally settled on "Plan G for Give Up" when it came to these "easy and inexpensive" dinosaur mugs. This pin failed me so badly I was inspired to create a new Pinterest board, "#nailedit -- Major Pinterest Failures." 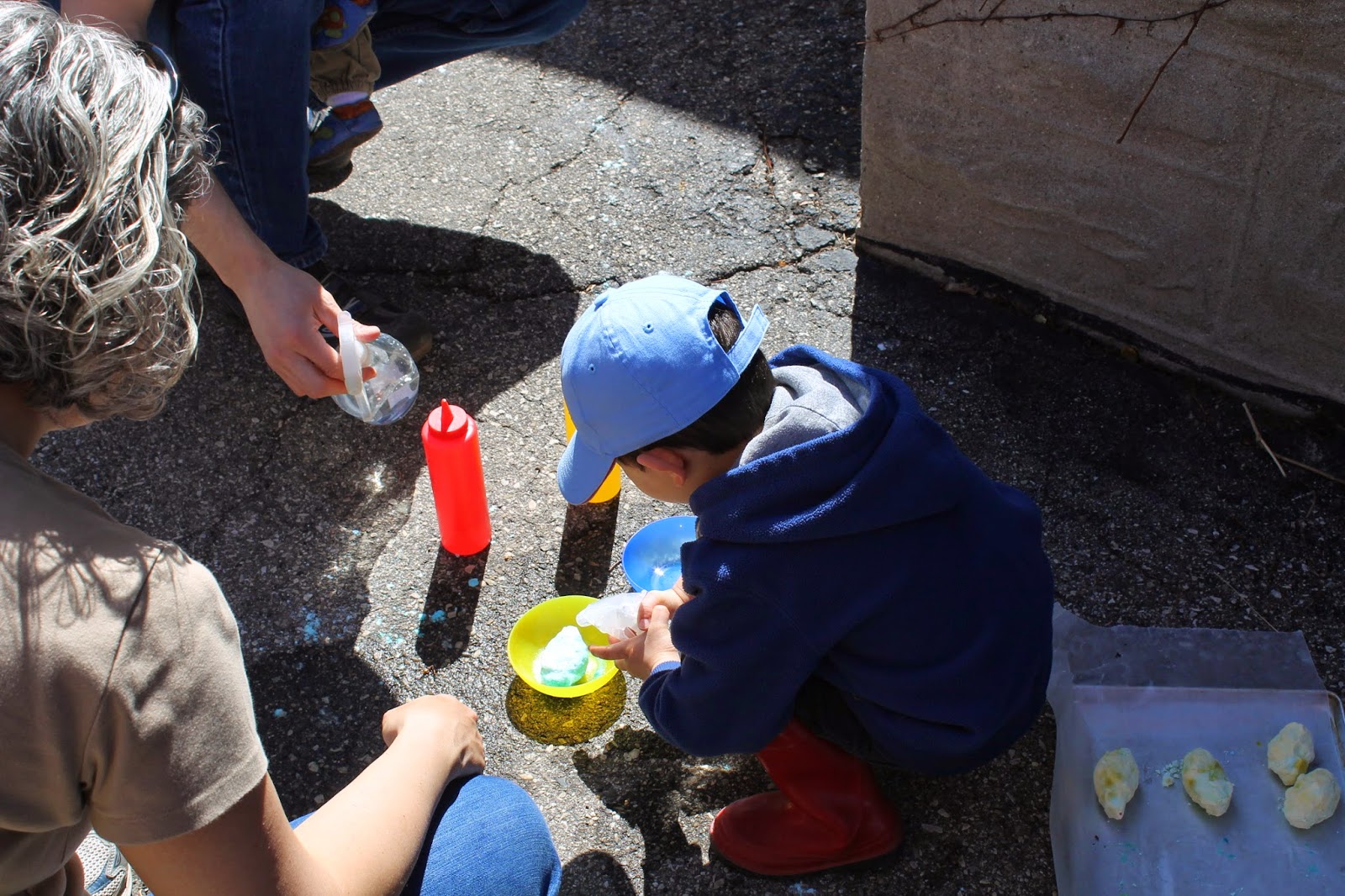 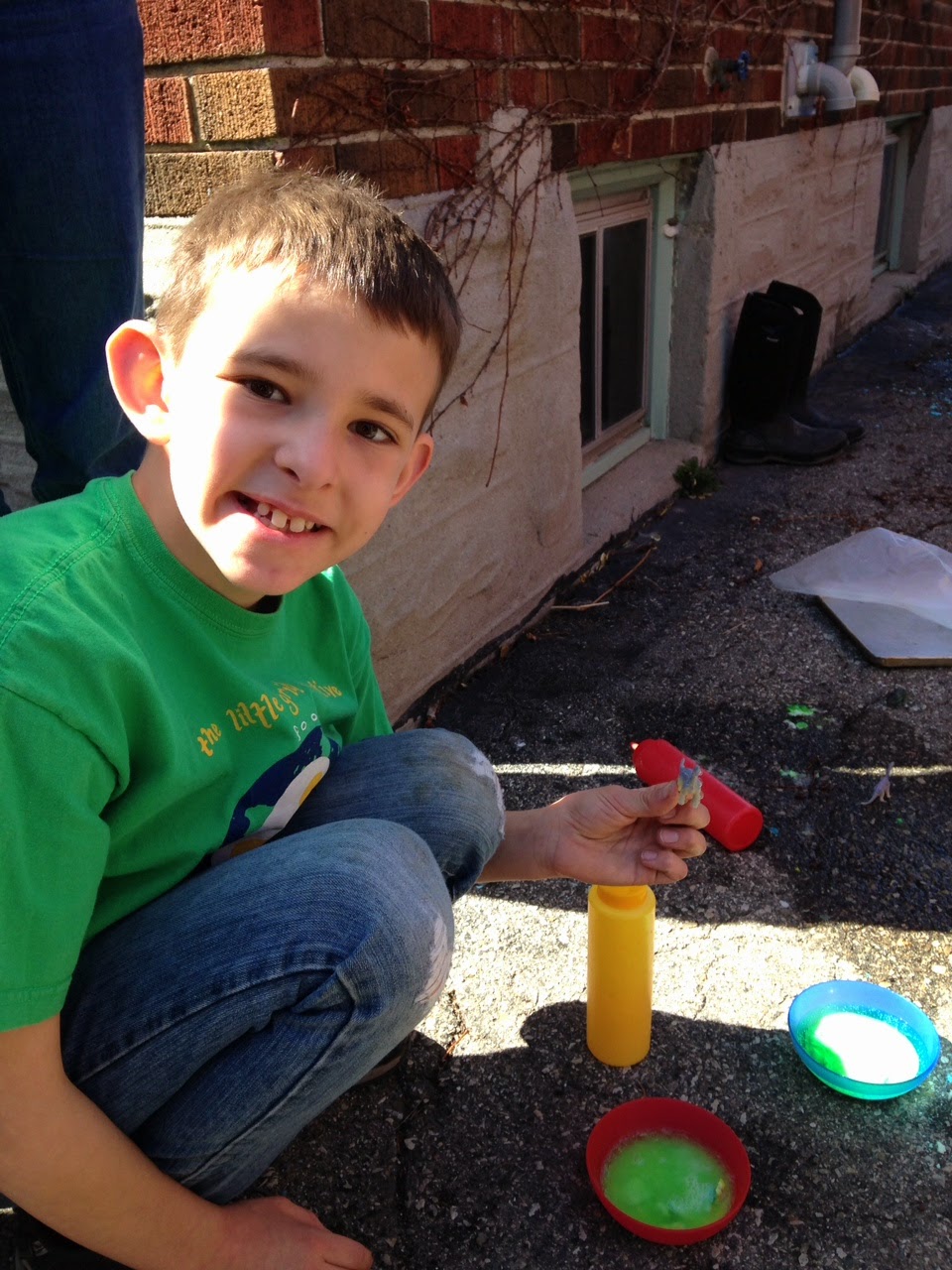 I think the hit of the party was absolutely these dinosaur eggs. They were fairly easy to make and the kids LOVED them. You just hide a plastic dinosaur in baking soda and food colouring, let them dry, and spray them with vinegar to hatch them. The only downside was that Sam started spraying our car with vinegar, and we discovered later that it had rusted out a few spots. Moral of the story: NEVER SPRAY YOUR CAR WITH VINEGAR. You know, in case you were tempted. 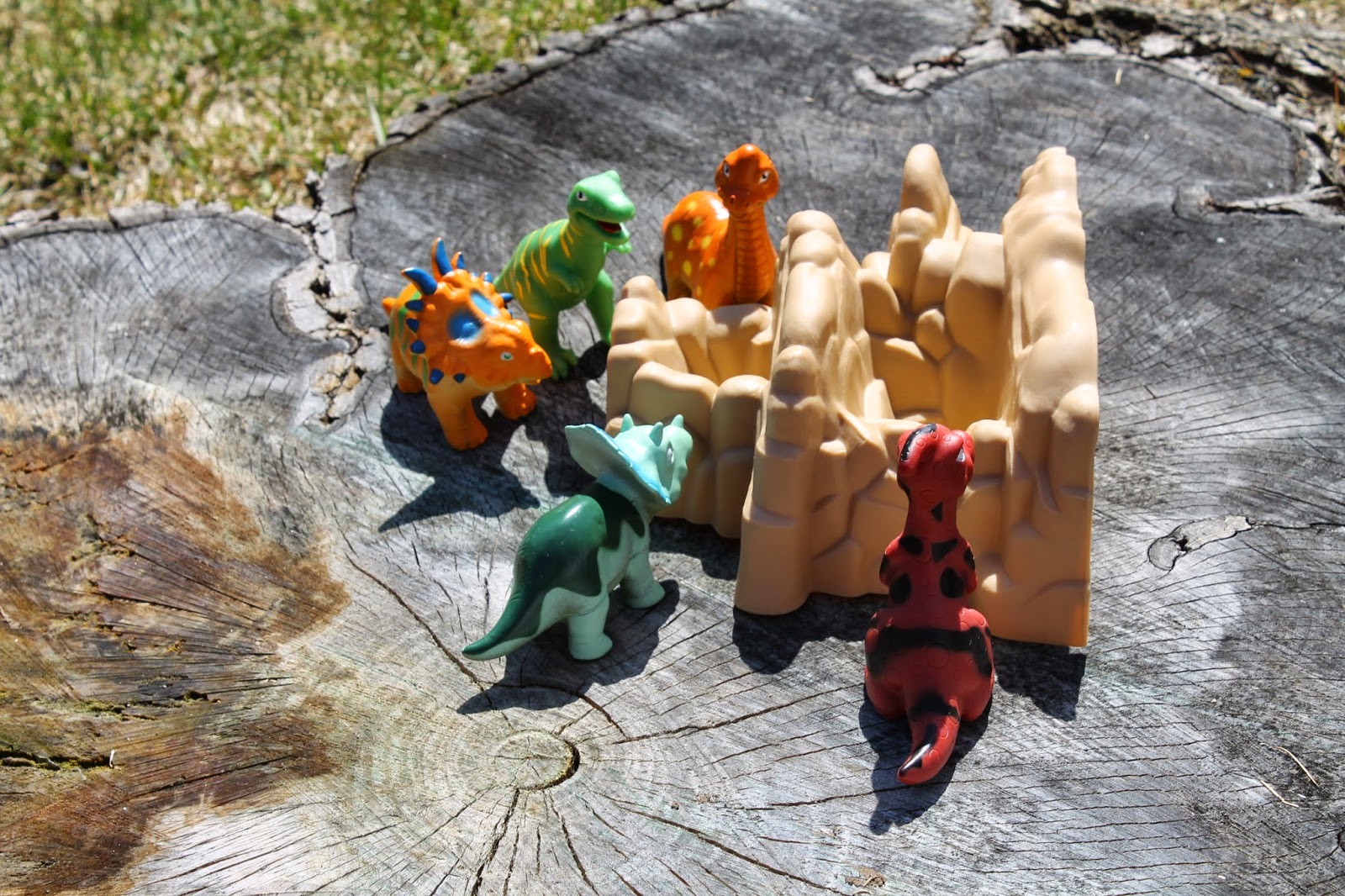 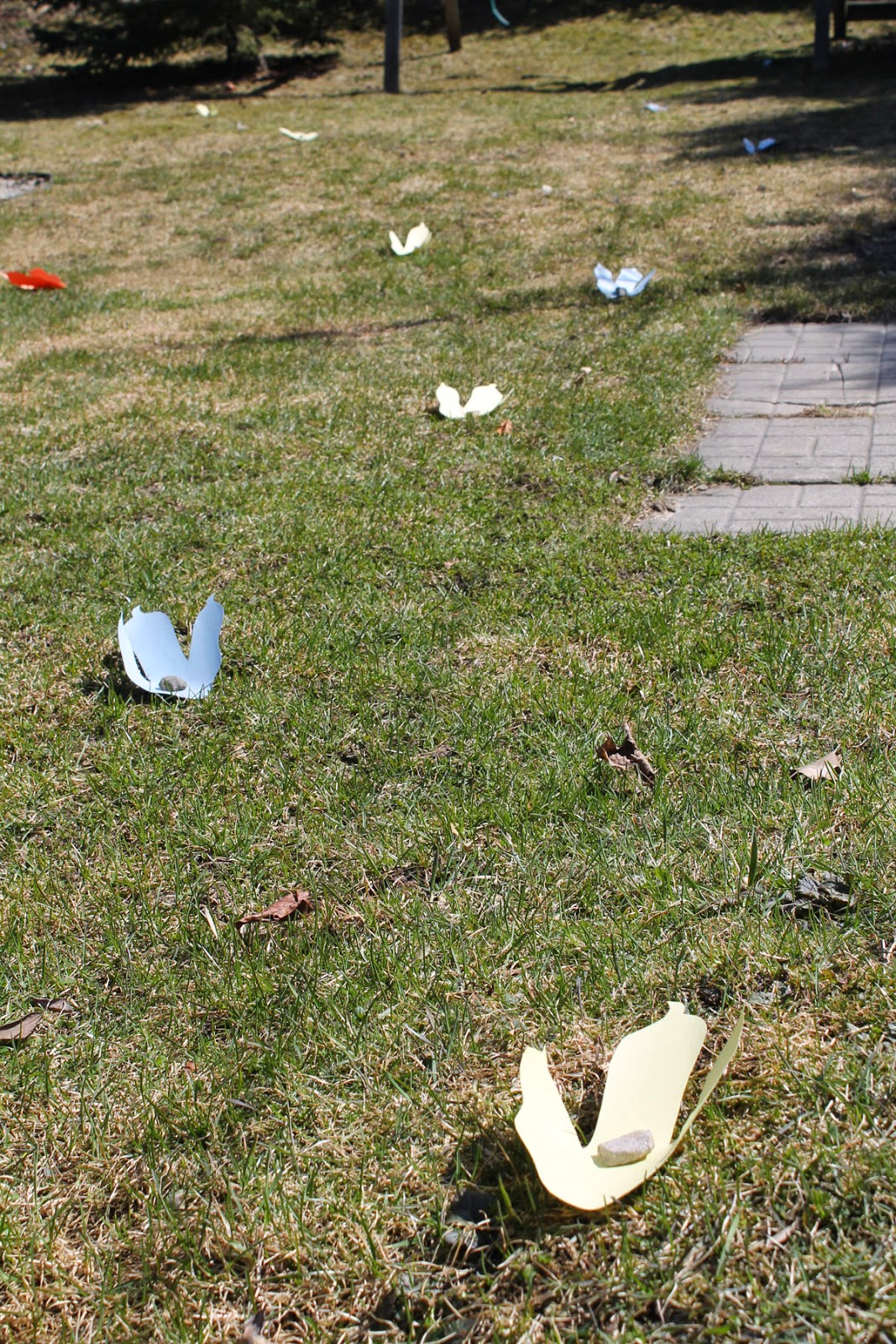 Dave created a treasure hunt with dino footprints and some dinosaurs. The kids all had a blast, and because it was absolutely gorgeous outside, we unearthed our outdoor table and benches and moved all the food outside. 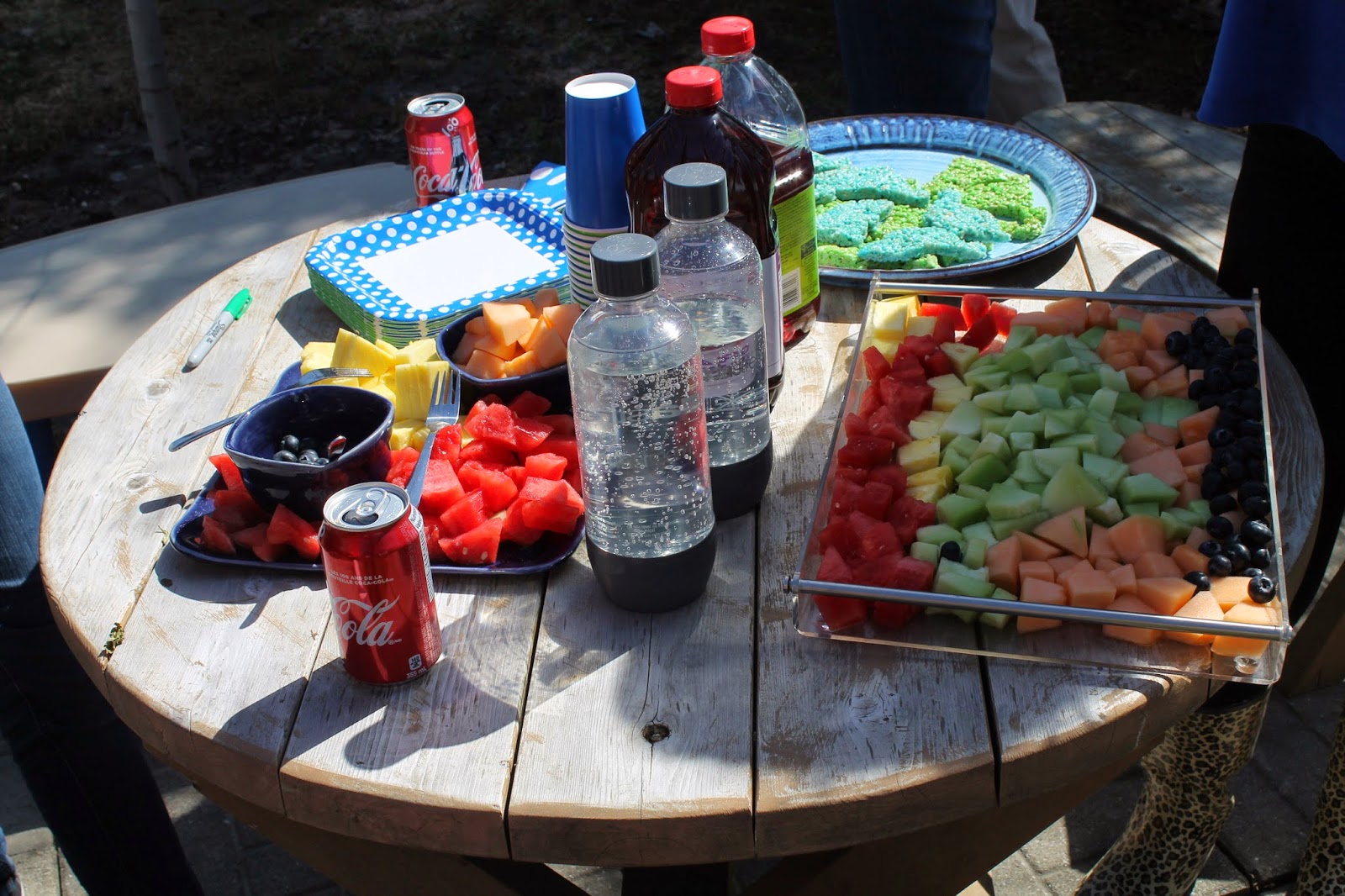 We had to do the candle blowing out in the garage however, because it was a little windy. 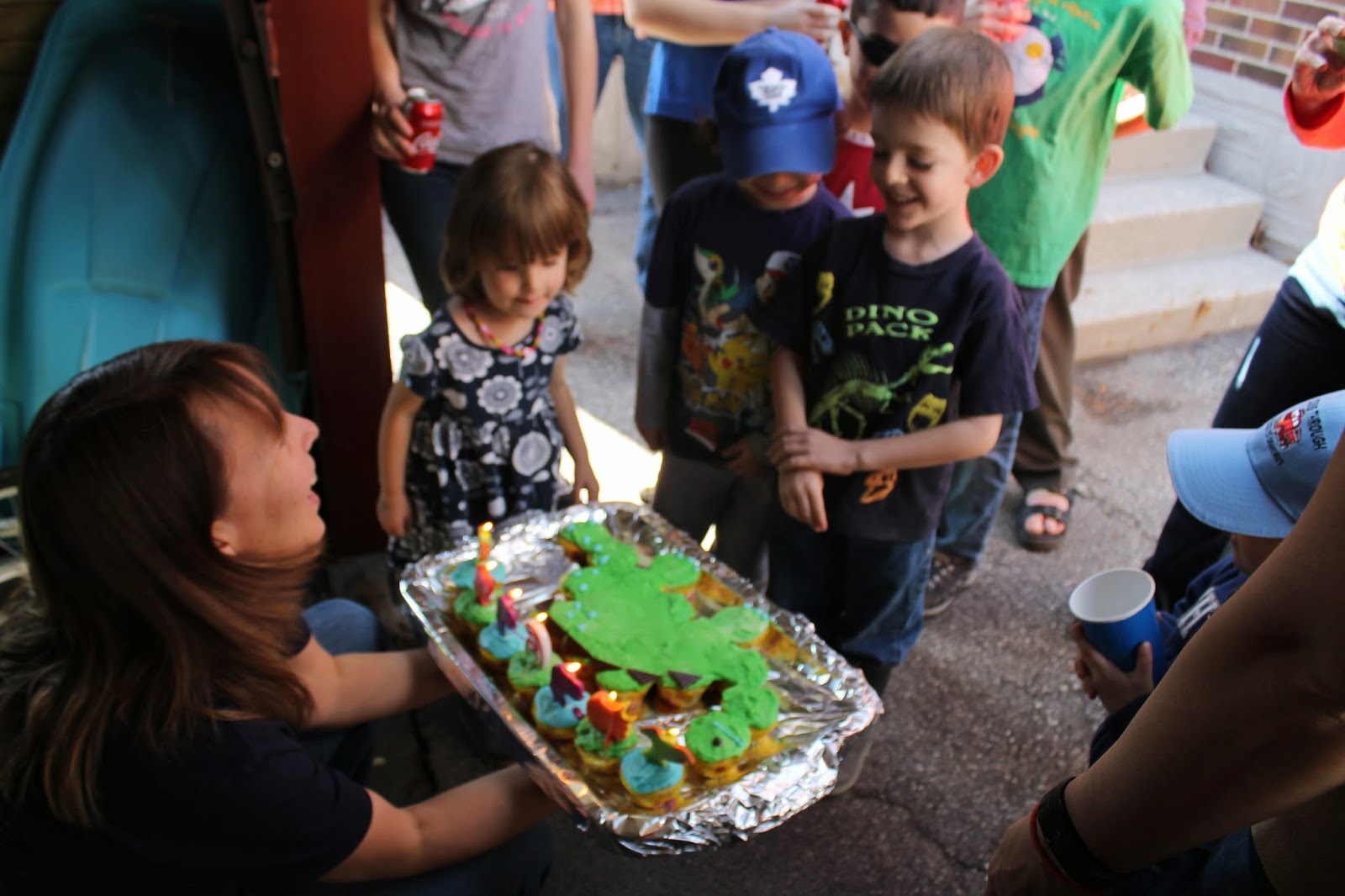 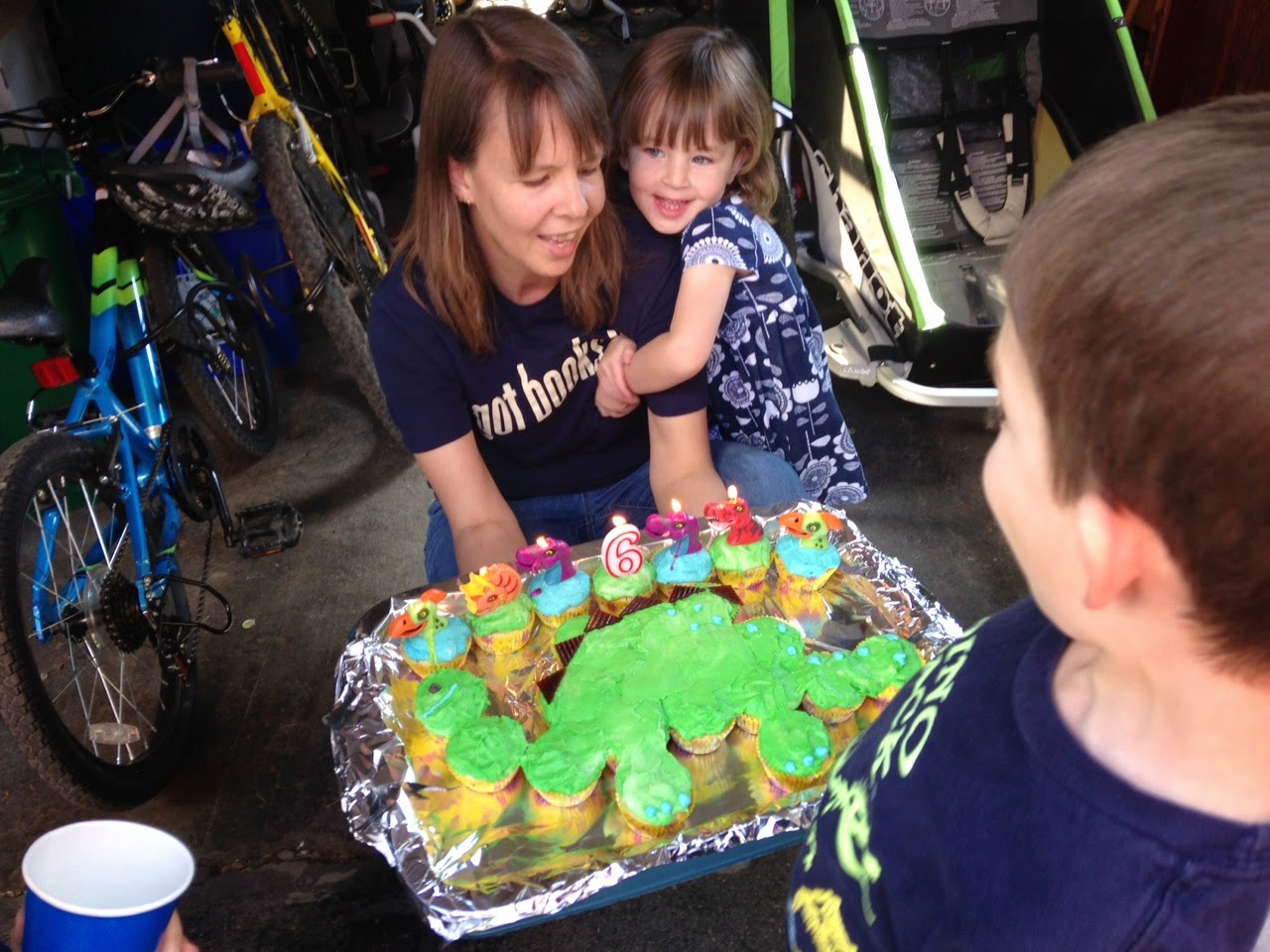 After everyone left, the kids wanted to keep playing outside. Rachel is wearing her wings because I asked her if she wanted to dress up for the party, meaning did she want to wear a dress. She said, "Yes, I want to be the Fairy Godmother!" so she wore her wings almost the whole time. So if you ever need a birthday party fairy godmother, you now know who to call! 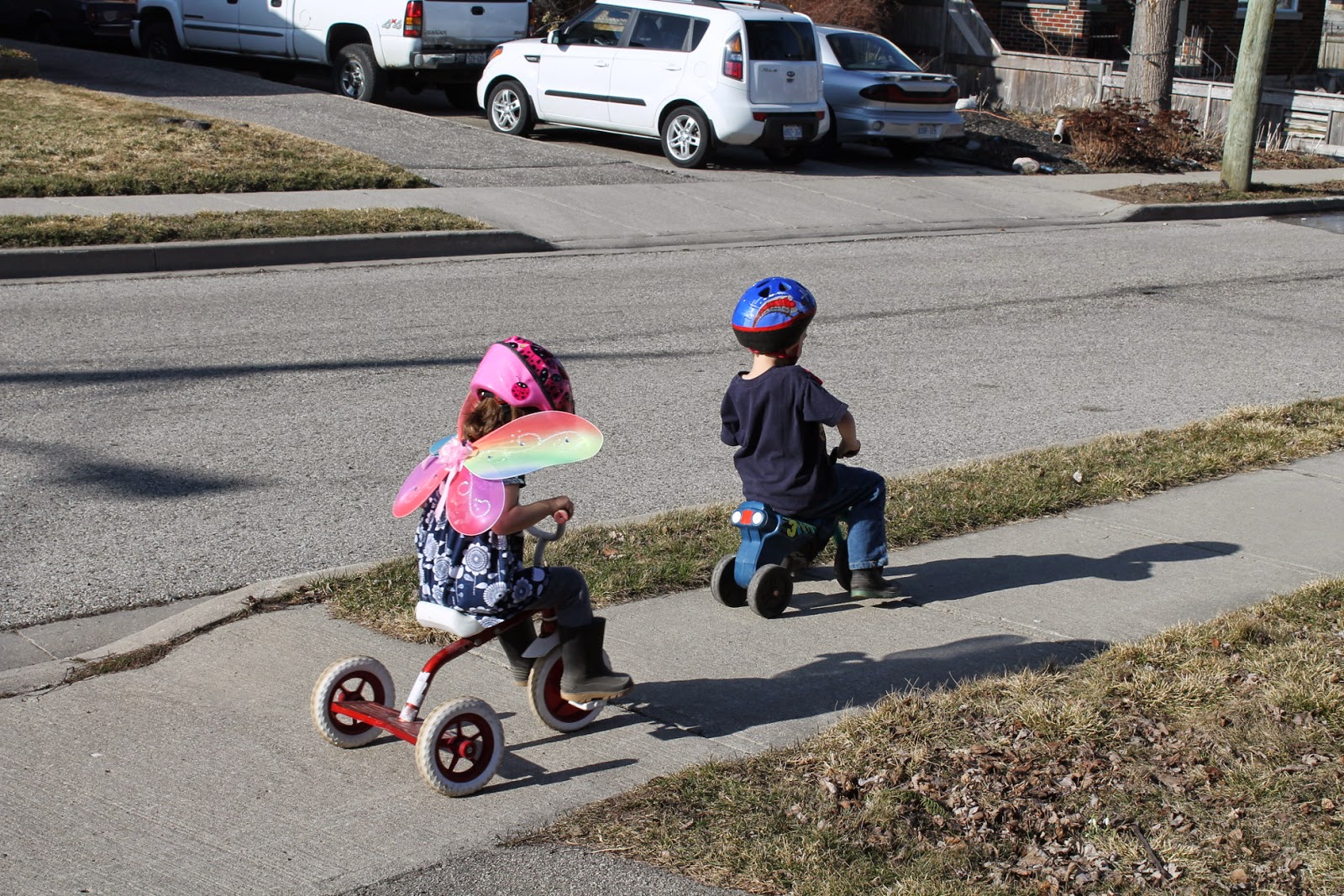 After supper the kids wanted to put on a show for us. It was pretty hilarious, the defining moment being when Rachel fell off the stump while hula hooping, and then the hula hoop fell, perfectly encircling her. I really wish I had a video of it because she couldn't do it again if she tried. I laughed so hard, I cried. 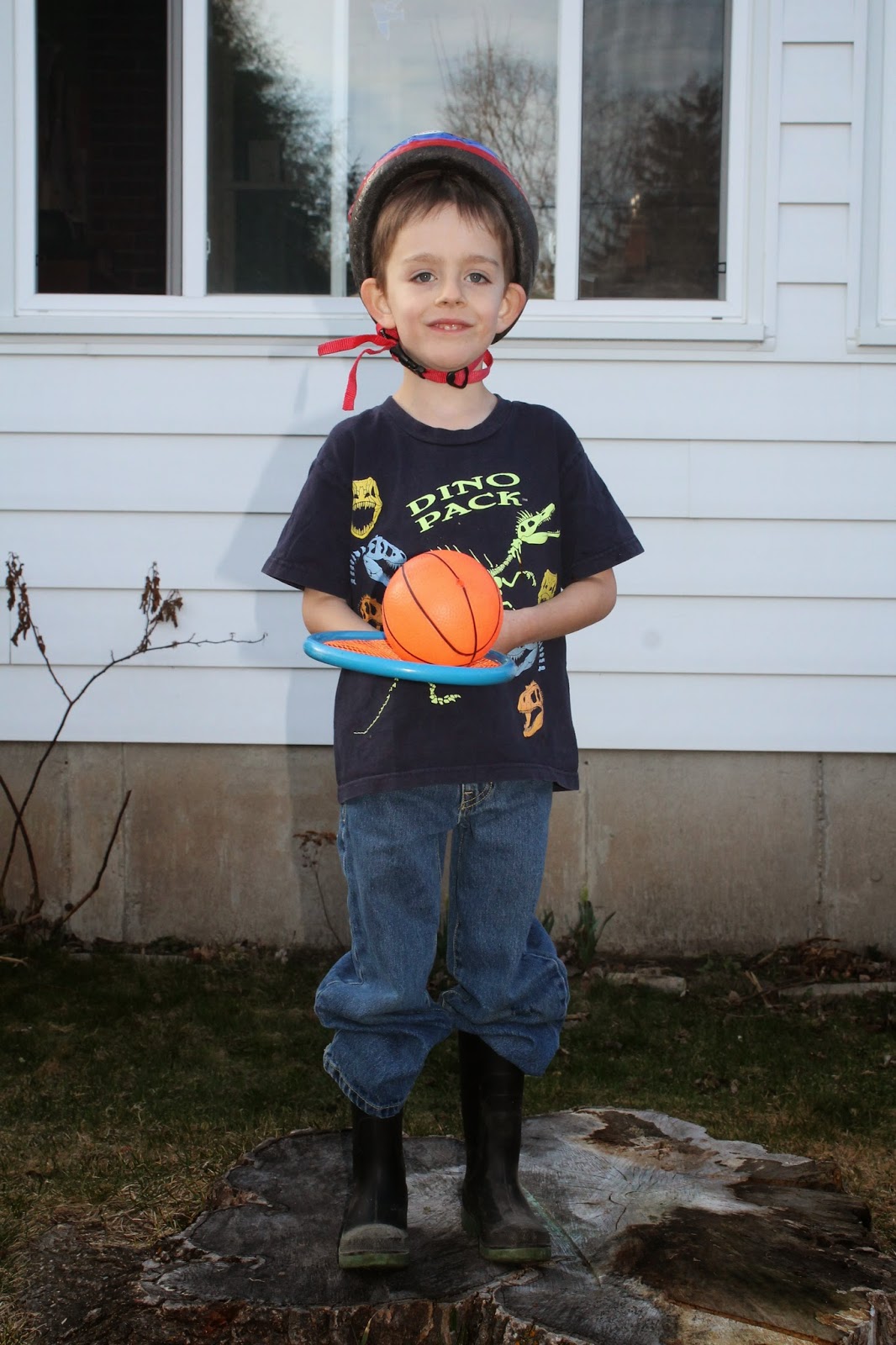 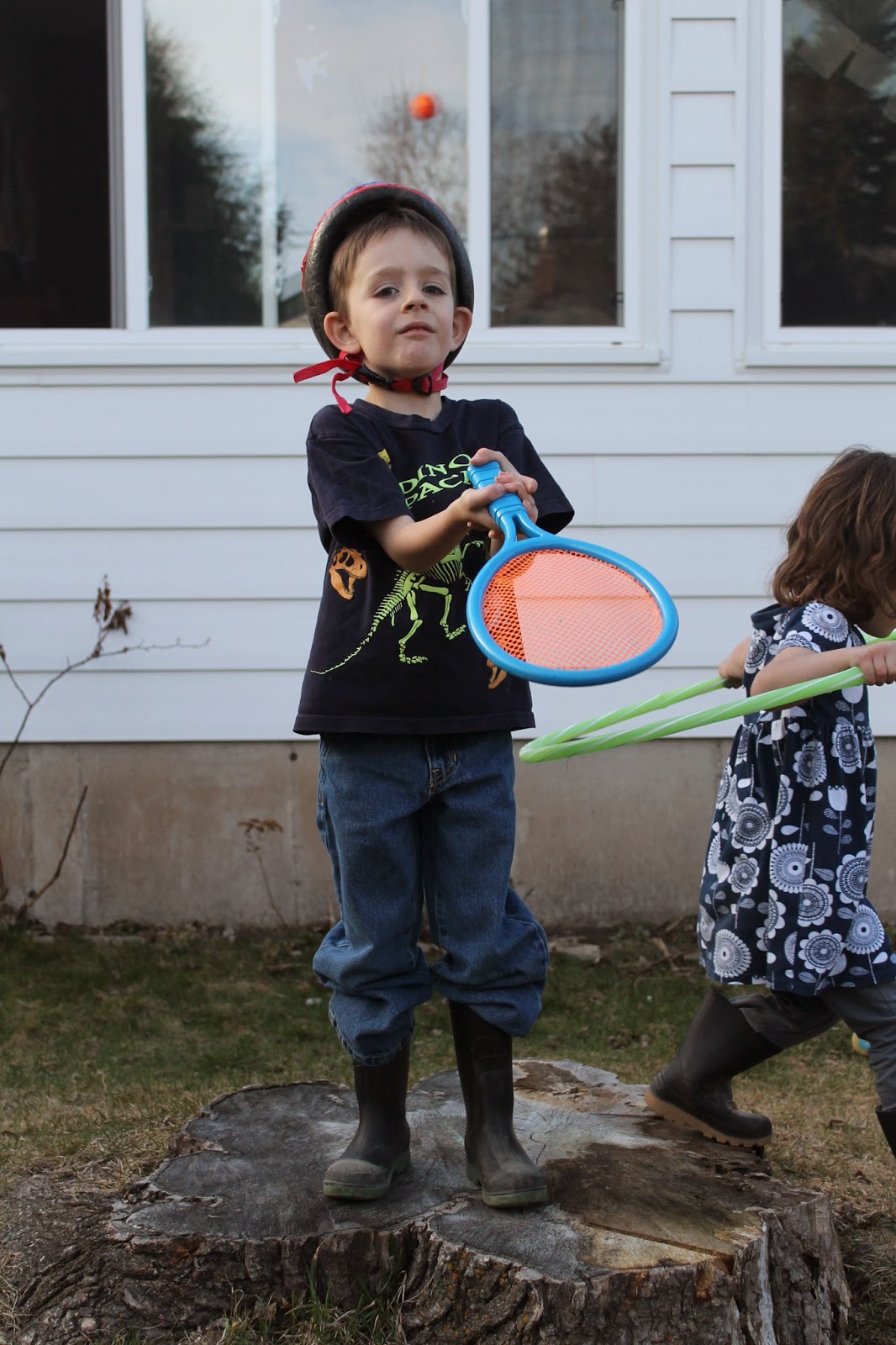 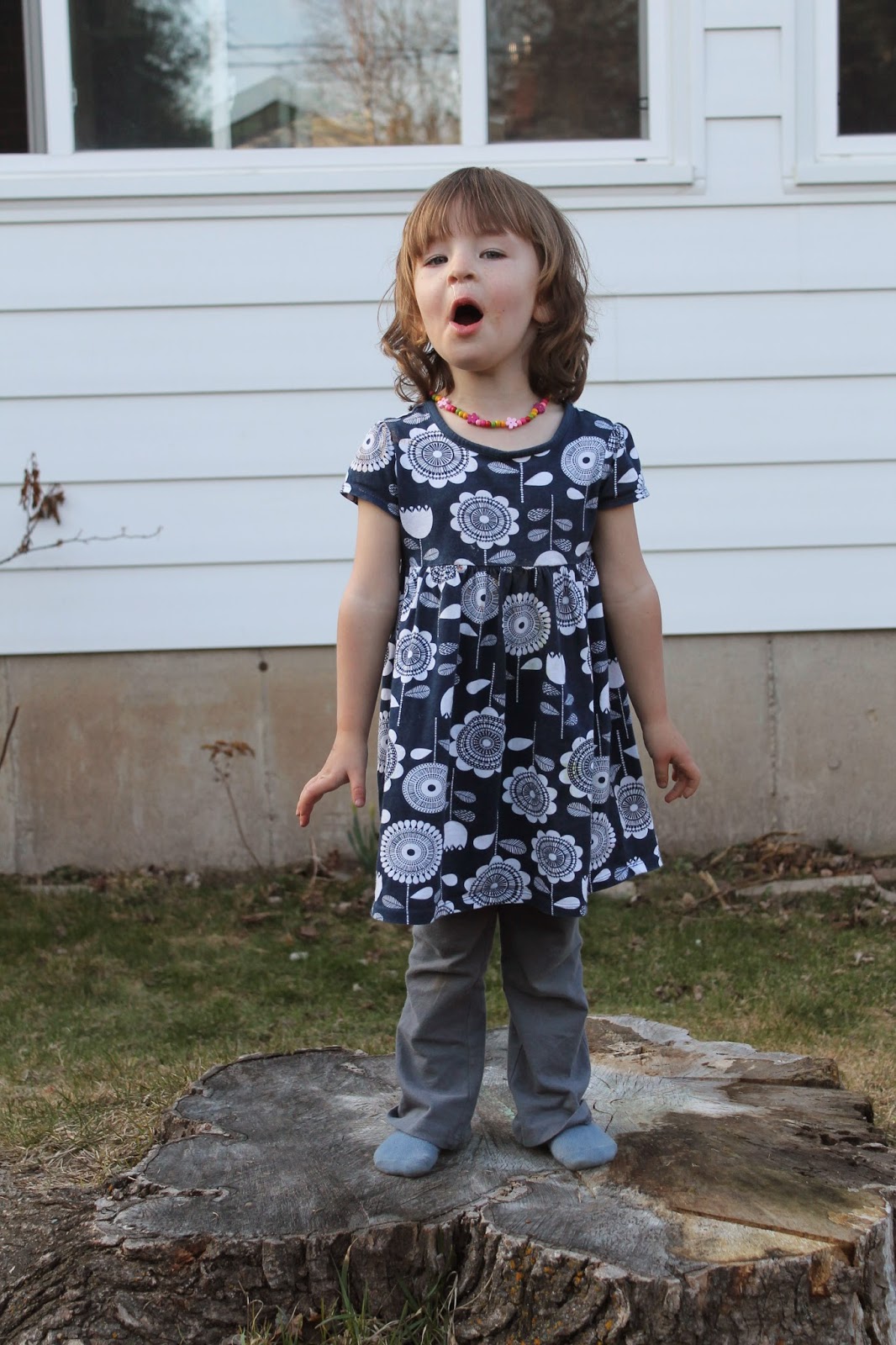 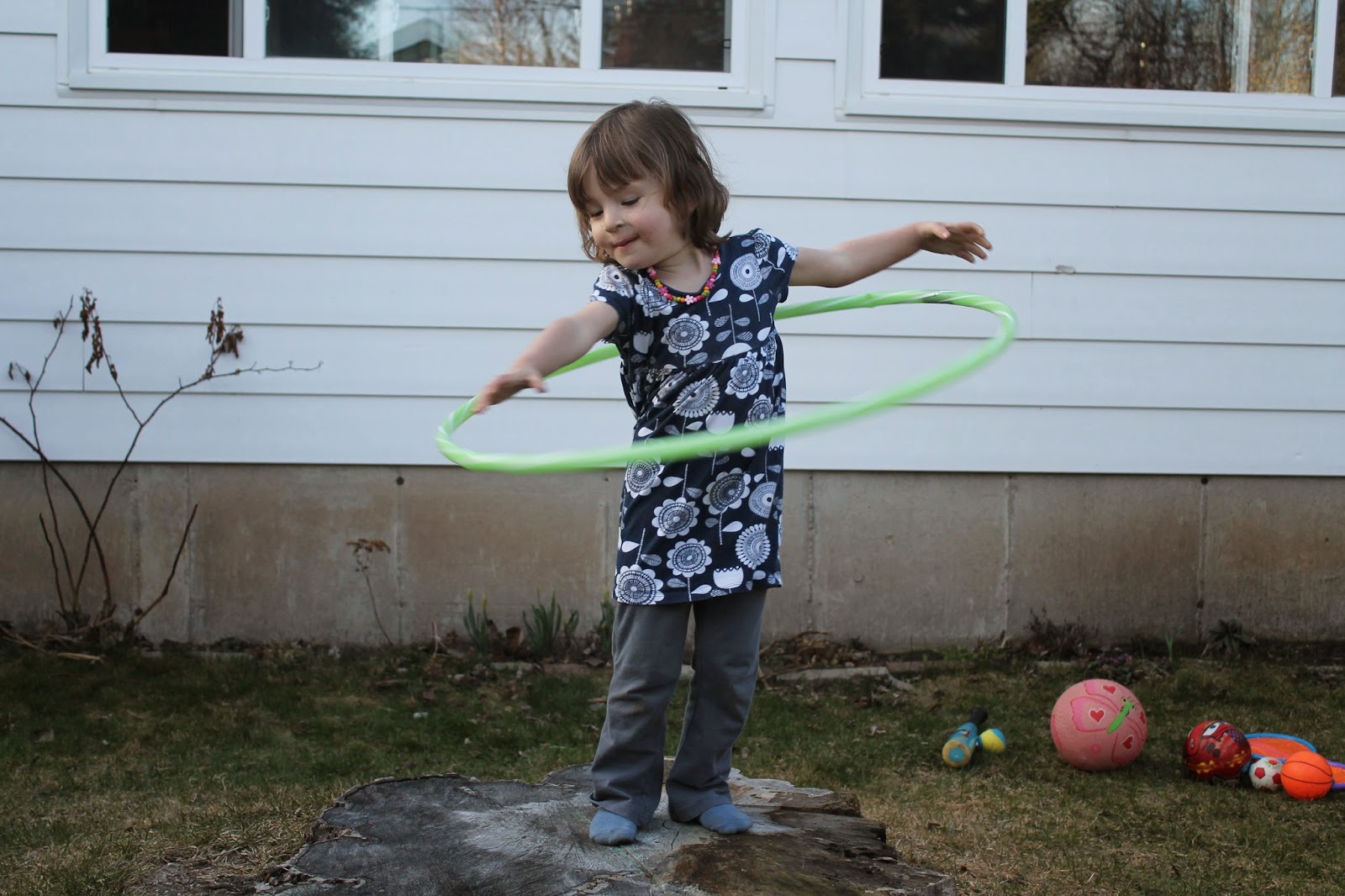 Unfortunately, about an hour after he woke up yesterday, Sam threw up, and hasn't felt better since. He even had a couple of naps yesterday. It's been a lot of canceled plans, watching videos, and trying to keep Rachel from irritating Sam around here. Things might be looking up though as (thus far) Sam has kept down a few spoonfuls of applesauce and some ginger ale for the past few hours. Yay?!

Hopefully tomorrow things will be back to normal and we can get back to enjoying the gorgeous weather we currently have. Yes, our snow has finally all melted and we're into the beautiful days of spring. Green things are popping up everywhere and we just want to be outside All. The. Time.

After all, there are more shows to be experienced :)

Labels: Birthdays, Pinterest Projects, Sam, We Are Healthy (Or Not), Yummy food