So late last week Sam started waking up every night with nightmares. He would wake us up crying sometime between 2 and 4am. Finally he started refusing to go in his crib. "The bad dreams are in my crib," he explained.

So on Saturday night we pulled his mattress out of the crib so he wouldn't have bad dreams. We also gave his a pillow (which I explained the bad dreams got caught underneath the pillow and couldn't get in his head) and he decided to sleep with his hockey sticks ("to hit the bad dreams away," he explained. Smart kid!) 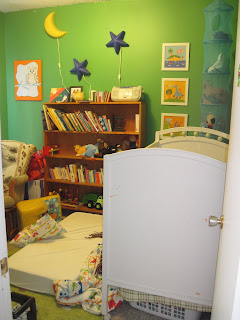 We asked Sam on Sunday if he was going to sleep in his crib anymore and he said, "I think I won't" so Dave dismantled it. We knew this day was coming but hoped it wouldn't happen until we moved. However, you cannot plan for kids and their transitions, as we have discovered! 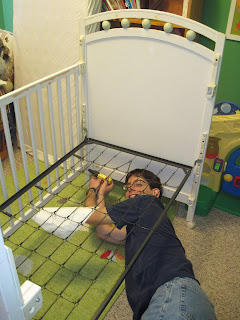 Sam was SOOOOOO excited to have his mattress on the floor, it was hard to get a good picture. Can't you just sense the excitement here?!?!?! 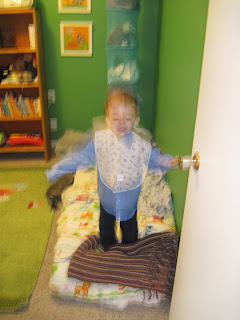 And just for fun, here's a video with Sam's explanation of the transition!
And here is Sam this morning, reading books in his new space. 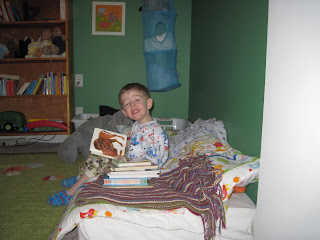 So far the transition has gone pretty smoothly. And since we've gotten rid of the crib, no more nightmares. Although maybe the "dream pillow" and hockey sticks have something to do with it too :)
Posted by Natasha at 13:04