Last week, we celebrated Purim at Temple Beth Ora, through not one but two weekly Shabbat services. For those of you not totally familiar with the various minor Jewish holidays -- most of which, including Purim, follow the "They tried to kill us, we won... let's eat!" pattern -- the holiday celebrates Queen Esther and her uncle Mordechai, who save the Jews of Persia from the schemes of Haman, who plots to kill the Jews and is unwittingly supported by King Ahashuerus. The holiday, despite the serious and violent story behind it, is focused on silliness and boisterous fun -- lots of singing, costumes, and noisemaking whenever Haman's name comes up during the reading of the story.

Our first opportunity to celebrate came in the form of the monthly family service, which (fortunately for our family) is aimed largely at preschool-age children. Thus, Sam and Rachel fit right in, and we have really enjoyed going to these services ever since they started up (in their current format) this past December.

Our costumes, as you can see below, were pretty low-key, and basically took the form of foam crowns that were on hand, so we could "dress up" as Queen Esther, King Ahasuerus, or some other royal personage. The family service featured lots of instruments, noise-makers (yes, the distinction is pretty fuzzy in a crowd of preschoolers) and singing, and a somewhat abbreviated telling of the story, featuring Natasha as Queen Esther! 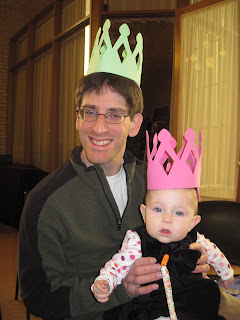 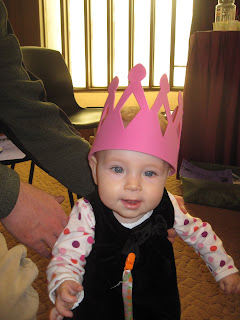 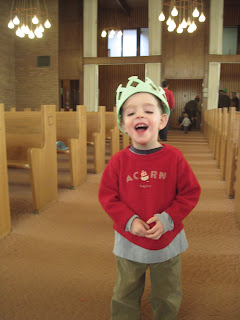 The following Friday, we went to the "regular" Friday night service, which was (since the holiday fell during the middle of the week), also devoted to Purim. Our costumes this time around were a little more involved -- or at least more intentional. Sam re-used his dinosaur/lizard costume from Hallowe'en, and was (fortunately!) much more enthusiastic about it than last time. Rachel was dressed up as a "spring fairy", which may or may not have simply been a good excuse for her to wear her super-cute Polka-Dot Piggy tutu that she got for Christmas. 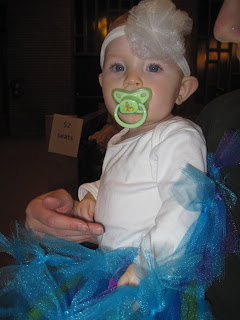 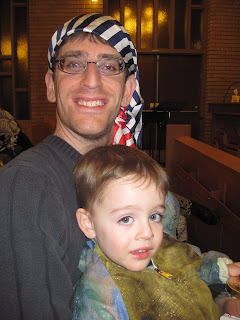 As with the Family Service, the focus of the service was telling the story of Esther, this time with some excellent acting from members of the synagogue. Matthew (in the picture on the right, he's the one in the black outfit and conical hat) was particularly villainous as Haman, and King Ahasuerus was also quite entertaining. 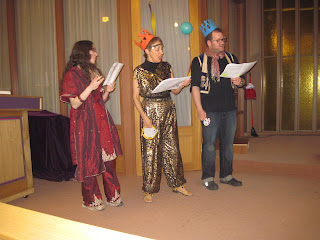 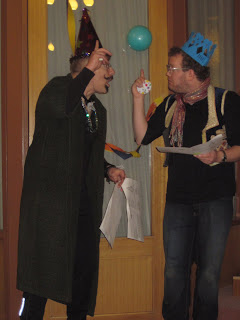 Here are Sam and Rachel after the "whole megillah" was read, enjoying some small toys that were handed out to the kids in attendance. 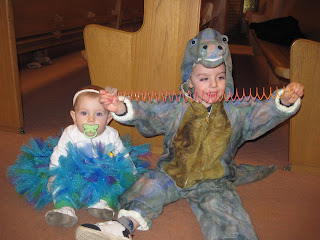 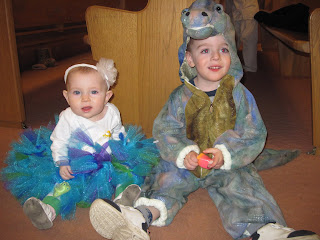