Why Limit The Celebrations To Just One Day?

As you may remember from earlier in May, the stomach flu completely overtook our Mother's Day plans. And really, all our plans for the next two weeks. So after two Sundays of stomach flu, and one of being out of town, we decided that this past Sunday was going to be our Mother's Day celebrations. But then it rained, and one of the things I wanted to do involved being outside.

So our Mother's Day celebrations this year are just a random bunch of events, which have been spread out over about five weeks, and will hopefully all be finished in time for Father's Day. Ha!

The first two Sundays Dave worked really hard to have the kids make me cards and he bought me flowers. Then we decided that possibly the combination of cards and flowers was bringing on the stomach flu, so he stopped.

The following Sunday, since the kids and I were still dressed from church, I asked if he could take some pictures of us. 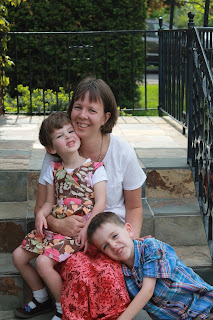 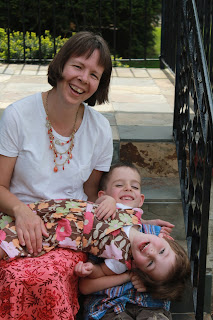 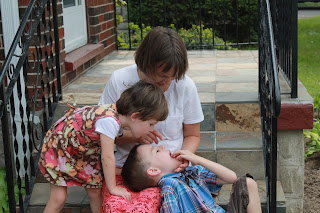 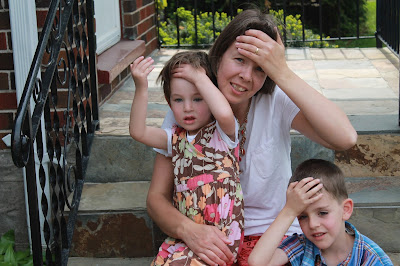 Hmmm...maybe trying to get nice pictures of us after a few hours in the car wasn't the best idea!

Then this past weekend, Dave announced he was making my special Mother's Day supper, even if our other plan wasn't going to work out. So while Sam was having a playdate, and I was cleaning the house (which I actually really wanted to do!), Dave and Rachel went grocery shopping. And then Dave came home and made this: 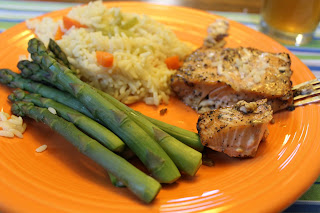 It's asparagus, rice pilaf, and Earl Grey Salmon. Yum! I tried to link to the recipe only to find the link I used had expired. Thankfully Dave had printed a copy of the recipe when we first discovered it almost two years ago. If any of you are really interested in trying this recipe, I will make the ultimate sacrifice and type it out for you :)

And now we just have one more thing left which I actually wanted to do on Mother's Day. I'm hoping it will work out for some evening next week, as this coming weekend is another full one and we have our friends' three kids on Sunday afternoon.

The one upside of celebrating Mother's Day over the course of a month, is that I do feel very appreciated, since Dave feels bad that nothing has gone quite as planned. Thankfully, I am not bitter about the extended, interrupted celebrations since I realize there is nothing I could have done to change anything. This philosophy makes me feel like I am possibly maturing (a bit), which is possibly the greatest Mother's Day gift of all!
Posted by Natasha at 07:08