The Sad Tale Of A Boy And His Fish

As you may remember, a couple of months ago for his birthday, Sam got a fish, which he promptly named Betta. Betta was a good fish, and Sam was a good pet owner. He always remembered to feed Betta and spent a lot of time just watching Betta play.

Sadly, on Saturday night, we suspected that Betta had died, despite the fact that Betta fish are supposed to be long lasting. By Sunday morning, we knew that the worst had happened. 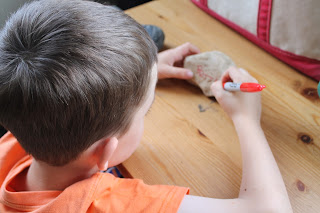 Sam was pretty quiet on Sunday morning and when we talked with him he said that he wanted to bury Betta outside in front of some snapdragons we had planted the previous week. He didn't want to flush Betta down the toilet and he wanted to wait a bit before burying Betta. 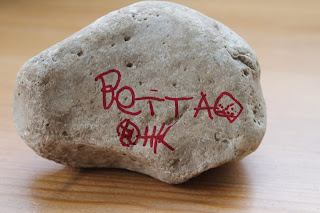 So last night we had a funeral for Betta. Sam and I dug the hole. Sam drew a gravestone for Betta (you can tell Betta is dead because his eyes are x's and it's a sad face after Betta's name), and Dave and Rachel performed the funeral procession.

We all said what we liked about Betta and then Sam covered him up. 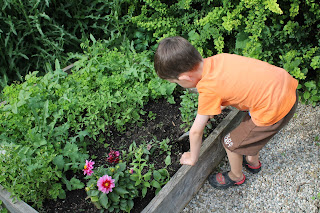 Sam wants to get another fish but he wants to wait awhile, "Like maybe next week Mommy."

The one thing which has caught me off guard is how sad I am about Betta's death. I don't know if it's seeing Sam being sad or what but I've just felt really sad these past few days. 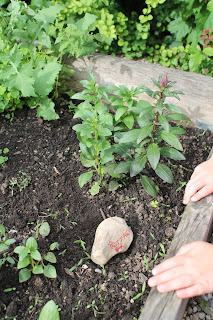 RIP Betta. You are missed.

FYI, I asked Sam both if I could take pictures during the funeral and if I could write this post, and he was okay with that.
Posted by Natasha at 08:16