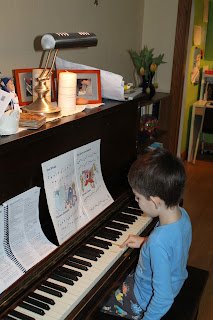 This past weekend was a good one. Although Sam was sick, and stayed home from Religious School, he did have enough energy to teach himself a little bit of piano :) I think we might need to sign him up for lessons in the near future. 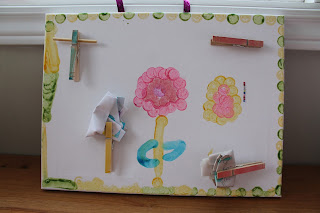 Rachel went to her first school friend birthday party on Saturday afternoon. It was at Michael's and she made this beautiful painting, which I think might also be a picture holder. Rachel is currently using it to hold special items (aka crumpled pieces of paper). 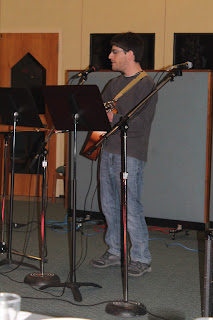 On Saturday night the youth at our church held a coffeehouse fundraiser. Dave contributed a couple of songs to the event. It was really fun to see some of the people perform (think seniors doing hilarious comedy!). Plus there were desserts. YUM! 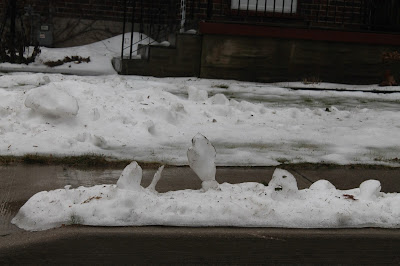 On Sunday as we were leaving for church we noticed some interesting snow formations. It was the snow melting in weird ways as it was also raining. In the middle of this picture, what with the leaves forming a face (of sorts) and the formation to the left of it looking like a hand, it kind of looks like someone is emerging from the ground. Am I the only one who sees this? Aren't you thankful for this insight into my brain?! 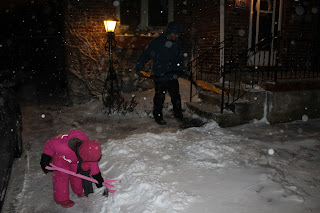 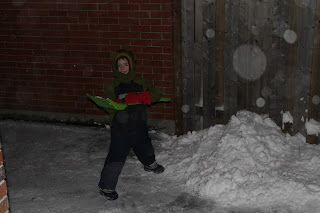 Even though we've hired someone to shovel our snow during the week (Best. Decision. Ever!), we had enough snow on Sunday (yes, the day started out with rain and ended with a bunch of snow) that we decided to have a Family Shoveling Time. I captured these pictures and the white spots are the snow continuing to fall.

And that was our weekend -- weird weather, yummy desserts, and exciting birthday parties.
Posted by Natasha at 08:14