So About Those School Resolutions

Back when the kids started school, I wrote a whole post of "not resolutions" which basically boiled down to one thing, "Be Prepared." Now that we've survived almost two months of school I thought I would do a quick check in and let you know how things are going.

One of the things which has worked really well is that Dave has been taking the kids on Saturday mornings. Sam has religious school at the synagogue and Rachel has music and, every other Saturday, Tot Shabbat. On the off weeks they do errands. This means that I have about four hours to myself every Saturday. You may have already figured this out because I usually spend some time reading and commenting on your blogs :)

The other thing I do though is follow through on some of the things which make our school week a little easier to handle. 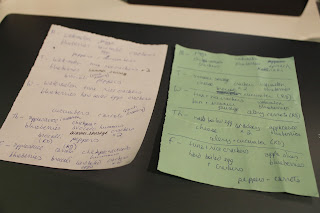 Except for a few weeks, I've menu planned the kids lunches. Dave is the one who actually packs them but he claims that having them already planned out makes life easier. I also make sure the dishes are washed after school (see below) so that they are dry by the time Dave makes lunch. This has been working pretty well, except for Thursdays when I have about twenty minutes at home before our evening activity.

I also make sure we have the food on hand for the lunches I've planned. I've discovered that one of the best times to go grocery shopping is 7am on Monday mornings. That's the earliest our grocery store is open, it's quiet, and I get through my list in about twenty minutes. 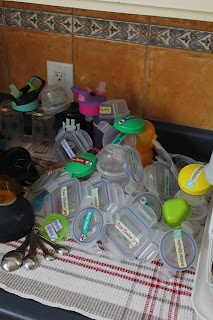 Something which has been working surprisingly well is laying the kids' clothes out for the week. I set out outfits, according to the weather, and then the kids just know to put the next outfit on. Rachel's outfits also sit on a shelf in her room; I just put them on her dresser for a picture. I usually put Rachel's outfit of the day on her dresser the night before, but Sam just dresses himself in the morning with the next set of clothes on the pile. 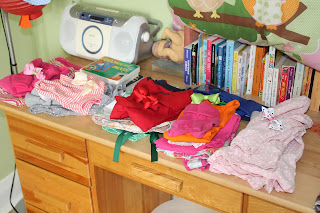 Since I've been trying to get a few hours of work in every morning, or I'm gone, Dave has been handling the whole breakfast routine. I can safely say I am awake well before the kids almost every weekday morning :)

So, in general, I think things, on the school front at least, are going pretty well. Now it's just the rest of life to sort out!

What tricks and tips do you have for making your school/daycare mornings run smoothly? Anything else I should add to my Saturday mornings of preparing?
Posted by Natasha at 08:12

Labels: School for Sam, Schoolgirl Rachel, Working For The Weekend