On Saturday night we went to Waterloo North for the International potluck and the beginning of the 25th Anniversary celebrations. This was the main impetus for Rachel and I going to Waterloo for this particular time. It was sooooo good to be at Waterloo North again and be able to introduce Rachel to people. 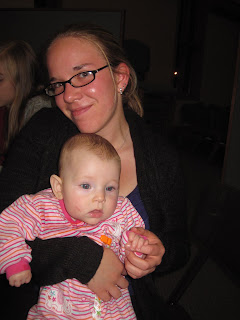 Rachel meeting Vanessa. I taught Vanessa Sunday School when Vanessa was four. She was my first class of four-year-olds and she just graduated Grade 12. I also got to be Vanessa's youth mentor and she is such an awesome person. I am so excited to see what her future holds.

The one thing that struck me was that all the kids who were holding Rachel were kids I babysat or taught Sunday School to or had other roles in their lives and now they are excited to have a role in Rachel's life. It's so neat how things come full circle. 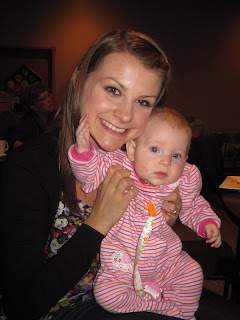 I nanny-ed Elizabeth the year that she was 18 months until she was 2 1/2. Then I joined Christian Peacemaker Teams and would get to spend a couple of days with her when I was home on leave. Elizabeth is in Grade 9 this year and she is so beautiful. I can't believe how grown up she is. And when we get back to Waterloo she can babysit for Sam and Rachel. (And then they can babysit for her kids and so on and so forth!) 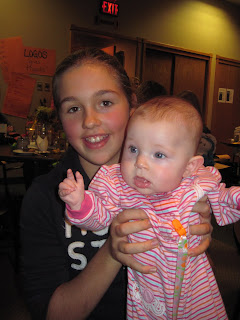 Kara was one of my Kids of LOGOS kids in the first Waterloo North test of LOGOS. I was with a bunch of kids whose parents were involved in LOGOS but they were too young for the test run. So I taught them LOGOS. We did worship skills, where I would teach them a hymn we were singing in the service on Sunday. I didn't have them for dinner but after dinner we'd have Bible Time where I would try to teach the scripture we were reading on Sunday to the kids and then we'd do a craft based on the scripture. Then we'd have Rec and Play where we'd play games. Their favourite game was one I made up called "Slow Slugs." The purpose was to get the kids' energy down and they had soooo much fun with it. Anyway, Kara holds all babies at Waterloo North so I now feel like Rachel is a true Waterloo North baby because Kara has held her! 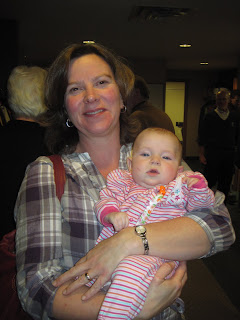 Shirley is a part of our care group at Waterloo North and I ate supper with her and her family. It was so good to connect with them again. If we ever have a surprise third baby Shirley is so totally going to be our midwife!

I was sad not to be able to have a really long visit with everyone this time around but I was glad that people could at least meet Rachel and I could somewhat connect with them! I really can't wait until we move back to Waterloo and can attend Waterloo North on a more regular basis. 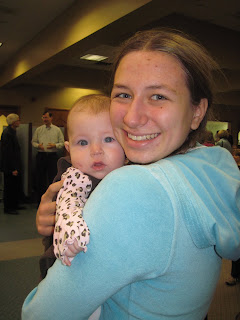 I didn't take a lot of pictures on Saturday night so I asked Zoe to hold Rachel on Sunday morning so I could get a picture of the two of them together. It's so crazy to me that I remember when Zoe was born and played with her as a little girl and now she is so grown up. And I love that she is so much her own person.

The service on Sunday was so great! I miss the singing and it was so nice to see more people. I even took Rachel up for children's time and Tessa held her for a bit. After the service we went out and buried congregational covenant commitments. Tim and Janice were singing in the choir so Willem came out with me and I needed to tie my shoe so Lisa held Rachel while I tied my shoe and then just kept her. And to me that is what Waterloo North is all about. I had someone's kid, but not my own, and someone had Rachel and it was beautiful.
Posted by Natasha at 15:59